Quebec students must bring the workers into the struggle! 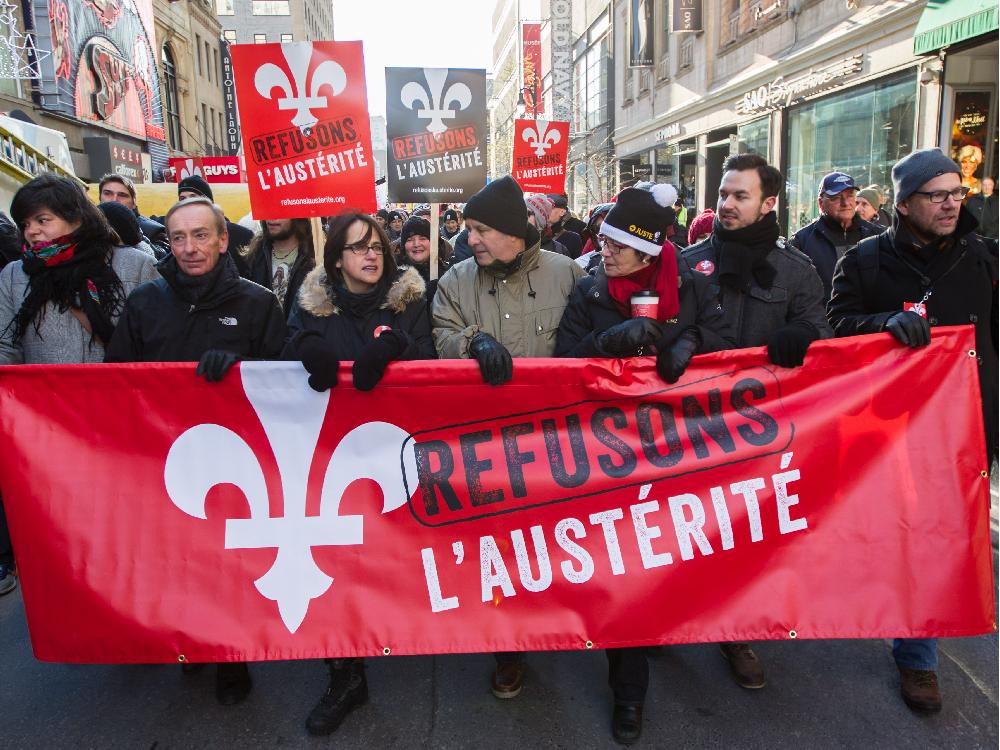 The mandate for the two-week student strike is coming to a close this week, and ASSÉ’s weekend congress will be dominated by debates over the way forward. Much controversy has arisen over the fact that the ASSÉ executive has put forward a proposition to end the strike and wait for possible strike action on the part of the unions in the fall. On the other hand, the #printemps2015 committee – a sizable grouping of radical students responsible for much of the mobilizations of the student strike – has denounced this move and is pushing for a continuation of the strike. The sizable night demonstrations and the large numbers of students on strike show that there is an overwhelming desire among the youth to fight back against austerity and that there is a lot of energy and passion looking for direction. But what is to be done? Both dominant positions in fact miss the main task that currently confronts the student movement: bringing the workers into the struggle! There is huge potential, but it must be made clear that the students cannot win alone and must concretely reach out to the workers.

Certainly, the student movement once again is showing its strength in Quebec. Around 55,000 students have been on strike since March 23rd and over 130,000 have voted to be on strike for the big demonstration on April 2nd. The tradition of night demonstrations has been revived with thousands pouring onto the streets a few times a week to protest the cuts. Furthermore, this is the first political student strike in the history of ASSÉ, the main student union and initiator of the 2012 Quebec Spring. The aim of the students this time around is to directly fight against austerity, with the aim of sparking a larger general strike of the working class.

The road to a 24-hour general strike

Against the backdrop of the student mobilizations, more and more workers’ unions are pressing for a 24-hour general strike on May 1st. Teachers at several CEGEPs, including Joliette and Sherbrooke, have voted for a strike on May 1st. Their proximity to the students, as well as their more precarious position compared to tenured professors in the universities, make them uniquely positioned to bridge the student and labour movements. The leaders of the CSN and the FTQ have already stated they are “in solidarity” with the students, but that no plan for strike action exists. The very fact that they needed to respond to this question shows that the idea of a general strike has a strong appeal among their members and they are attempting to apply the brakes. But it may not be so simple. Despite the leaders publicly distancing themselves from strike action this spring or summer and precluding the tactic of a general strike, several locals have voted for one since, including the research assistants’ union SETUE at UQAM. The nurses of Sept-Îles and the blue collar workers of Quebec City have even gone so far as to explicitly call for illegal strike action!

This has forced the CSN leadership to set up a web page dealing specifically with the question of the general strike and why “we are not ready.” It mentions the strike mandates in 1976 against Trudeau and 2004 against Charest. It fails to mention that, in 2004, the majority of members of both the FTQ and the CSN voted for a 24-hour general strike on which they did not act. It also conspicuously ignores the largest general strike in Quebec history in 1972, the heroic revolutionary mass struggle which almost brought the government down that year.

This provides a hint of the panic at the top, where the prospect of having to lead a real struggle frightens them. They have also ruled out any illegal strike action when the government has already declared their intention to legislate workers back to work! This is essentially a declaration of defeat before battle has begun. Any plan of action that boils down to a “wait and see” approach for the students cannot be supported, as it means that we must trust the union bureaucracy’s intentions.

Bring the workers into the struggle!

The most important moment of the 2012 movement was the sudden influx of new layers of society during the spontaneous ‘casseroles’ movement. This was where the working class masses descended onto the streets in solidarity with the students against the emergency law meant to crush them. That law transformed the situation, and suddenly the movement was not merely a student movement. Parents with their strollers, grandparents with their pots and pans; the whole character of the nightly demonstrations shifted as a result of the repression having gone a step too far.

The real power in society is the working class, and when those workers came out on the streets, the whole equation changed. But despite its enormous sweep, the movement never reached the point where the workers joined the struggle in an organized fashion. Unfortunately, the union leaders refused to call for solidarity strike action with the students, a move that would have entirely transformed the situation. The presence of tens of thousands of workers as individuals still made a difference, but their participation as workers – striking and shutting down production – would have had a far more effective weight in the movement. This is the central task this year: to bring the working class into action as a class.

It must be made clear that the hesitance of the trade union leaders does not reflect the mood of the rank and file. There is significant momentum building among both the youth and the workers. It would be irresponsible to simply put the mobilizations on ice because the union leaders have said that they do not plan to strike this spring or summer. The workers need the enthusiasm and participation of the youth to help them overcome their own union bureaucracy. The question should be, “how can we make this happen?”

We are reaching a new stage in the mounting struggle. The two-week student strike mandate comes to a close soon, and ASSÉ will be holding a congress this coming weekend to decide on whether to continue or wait for the fall. The executive’s proposition to wait until the fall risks taking the momentum out of the sails of the movement and could also aid the trade union leadership’s attempts to gain control over their rank and file, which is otherwise shifting in a radical direction. However, most students are not anxious to embark on a lengthy, isolated student strike and want assurances that they will not be going alone. “Continue the strike or not?” is not the crux of the matter. The workers need to be brought into the struggle or the struggle of the students will fail. Students cannot defeat austerity alone. Therefore, student-worker solidarity committees need to be consolidated on each campus and charged with sending delegations of students to every union local and every workplace in the area in order to forge links with the workers. From there, they would need to identify friendly shop stewards, local presidents, and so on, while appealing to them to vote for strike action on May 1st, following the example given by many union locals.

We cannot simply leave this up to the trade union leaders. Instead, students must go directly to the working class. Whether on strike or not, the mobilizing committees on the campuses, linked with the campus workers and teachers, should consolidate a plan to visit every workplace in their neighborhood. Beginning with the public sector workers, and then moving on to other sectors of the working class, students should proceed with a call for a 24-hour general strike on May 1st and call assemblies of the workers to present it, debate it, and vote on it.

The movement toward a general strike on May Day is picking up steam and could coalesce into a 24-hour general strike. This is how the general strike can be won, by turning toward the working class, as the students did in May 1968 in France.