Defend the right to strike! 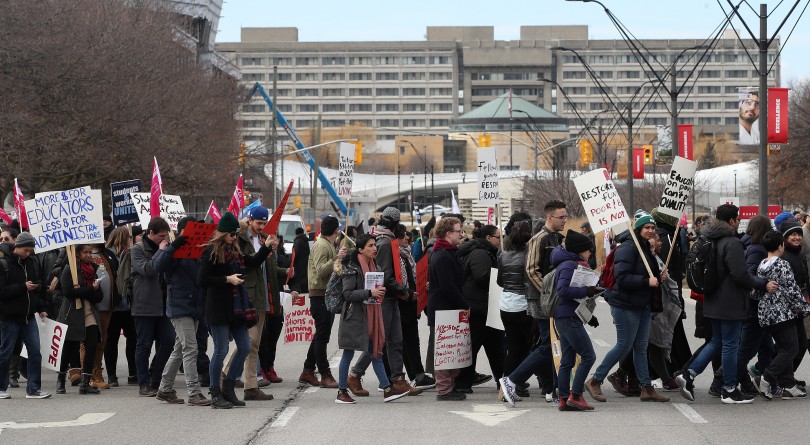 The right to strike is under attack in Ontario. On July 25, legislation was passed by a vote of 69-40 ending the strike of almost 2000 teaching assistants at York University. The Ford government, in power for only two months, has sent a message to Ontario workers that he is ready to violate their democratic right to strike in order to carry out his rotten agenda. By making an example of the teaching assistants, Ford hopes that other workers will be intimidated from going on strike themselves. If not, it won’t be long before they too face back-to-work legislation. It’s these sorts of thug tactics that workers can expect from the “People’s Premier” over the next four years.

In our society, the strike is one of the most powerful tools in the working class’ arsenal. Without it, the bosses would feel free to ride roughshod over us in their mad rush for profits. By withholding our labour, we are using the only leverage we have to defend our rights and eke out a decent existence for ourselves. For this reason, the bosses will stop at nothing to limit this right, if not remove it altogether. Like us, they possess their own tools to conduct this crusade: back-to-work legislation, as well as their faithful lackeys at Queen’s Park who carry it out. With the election of Doug Ford, big business has been given an opportunity to renew their offensive against the rights of working class people like never before.

Back-to-work legislation has a long history in Canada. Its first use was in 1950, when Liberal Prime Minister Louis-Saint Laurent forced an end to a strike of Canada’s railway workers. Since then, back-to-work legislation has been used by the federal government 33 times, largely against railway workers, grain handlers and port workers. Provincial governments have also made ample use of this draconian legislation. In Ontario, TTC workers were declared an essential service and then legislated back to work in 2011 under then Premier Dalton McGuinty. Then, in 2017, faculty at Ontario’s colleges were legislated back to work by McGuinty’s successor Kathleen Wynne. Today, Ontario’s Liberals shed tears at Ford’s harsh treatment of the working class. They conveniently forget that it was them who drafted the legislation against the teaching assistants at York University, and that Ford’s policy is little more than a continuation of their own.

Unfortunately, the response from Ontario’s trade union leadership has not been a particularly good one. Many of them encouraged a vote for the Ontario Liberals in 2014, despite their poor track record on workers’ rights. When that government inevitably brought down legislation against college faculty in 2017, the response from the union tops was to raise a hue and cry, and then to follow that up with…nothing. OPSEU President Warren “Smokey” Thomas even said he “understands” why the Liberals acted the way they did, and chalked the legislation up to “just bad policy.” This while his own members were having their rights violated! It is then no wonder why Doug Ford felt so confident going after the teaching assistants at York University so soon after being elected. As he predicted, no plan to resist the legislation was forthcoming

This does not bode well for the labour movement in Ontario. So long as union leaders allow their members’ rights to be violated by the government, they will continue doing so. Some have responded by taking the government to court, but this normally takes years, and even when the unions win, both Conservative and Liberal governments have shown that they are ready to ignore the law if it means teaching the workers a lesson.

There is only one way to fight against anti-democratic laws, and that is to defy them. The right to belong to a trade union in Canada would not exist today if it were not for the thousands of workers who fought against unjust laws which banned trade unions before 1872. For this, they risked steep fines, prison sentences, and so much more. But still they persisted, and finally they won. The bosses would very much like to return us to the period when unions were illegal. The only thing standing in their way is the might of the working class, which they are afraid of provoking. However, every capitulation by the union leadership only further emboldens the ruling class, who then, little by little, erode whatever rights have been won by workers in the past. This must be stopped.

Therefore, it is necessary that Ontario’s trade union leadership create a plan of action to resist future impositions of back-to-work legislation by the Ford government. A rule must be established that if even one local has its rights violated, the broader labour movement must do everything in its power to offer them support. This may include mass mobilizations, solidarity walkouts, or whatever other measures may be necessary to defend the rights of workers. The narrow-minded “not my problem” attitude of some union leaders plays right into the hands of Ford, and will lead to the destruction of the labour movement. The attacks against one union today will be directed against others tomorrow. Instead, the slogan “an injury to one is an injury to all” should be carried across the labour movement, not just in Labour Day speeches, but in action. Only in this way can back-to-work legislation be defeated, as well as the Conservative government behind it.

In just two months, Ford has already made his first big offensive against the rights of working class people. It would be the wildest fantasy to imagine that he will not resort to using back-to-work legislation again. There is no question: should he find the need to, he will use it again. That is, unless the labour movement is prepared to say “enough is enough,” and stand proudly in the defiant traditions of those who came before them. Ford has fired the first shot against the working class. It is time for the labour movement to fire back.