20,000 protest prorogation: Where now for the movement? 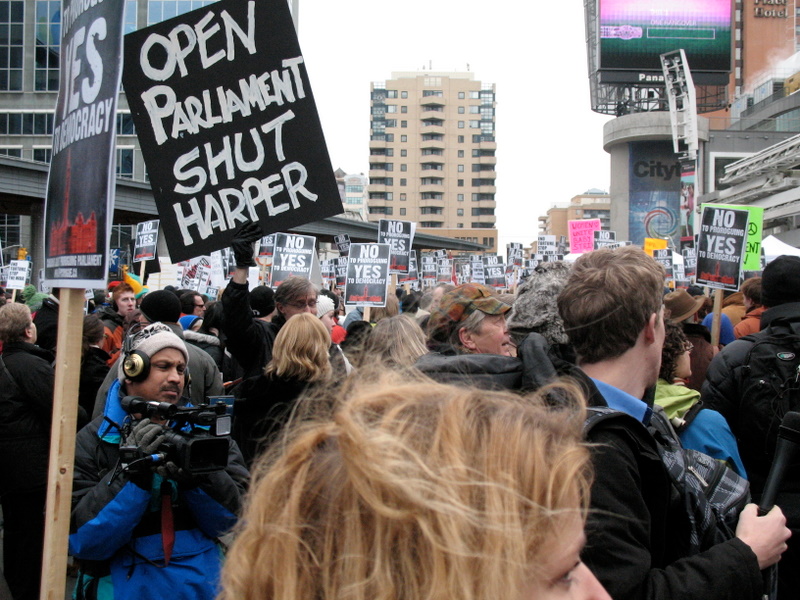 On Saturday 23rd January, up to 20,000 people demonstrated against Stephen Harper’s prorogation of Parliament. Protests spanned the country, from Halifax to Victoria, with crowds numbering 3,500 on Parliament Hill, between 3,000 and 5,000 in Toronto, and over 1,000 in Vancouver. Who would have thought that an issue of arcane parliamentary procedure could bring so many out on the streets? These protests are merely symptomatic of a growing dissatisfaction in society. The question is, who will be able to give voice to this discontent?

For the second time in 12 months, Canadian Prime Minister Stephen Harper has decided to shut down, or prorogue, Parliament. This obscure word has now entered mainstream Canadian political discussion. The first time the Harper Conservatives used this anti-democratic maneuver was actually popular. That was in response to the Liberal-NDP coalition that was widely seen as a sell-out. At the time, we pointed out that shutting down Parliament, with the aid of the Queen’s representative and to avoid a confidence vote, set an undemocratic precedent. If Hugo Chávez or any other opponent of imperialism took a similar action, the protests by the corporate press would be unending. But in Canada, it was seen to be acceptable and not undemocratic, because “there are no rules against it!”

This time, however, the result was quite different. Facing growing pressure from the Afghan torture scandal (see Fightback Issue 35), the Conservatives thought they could sidetrack the discussion while everyone is distracted by the Vancouver Winter Olympics. In the middle of the winter holidays, on the same day as the announcement of Canada’s Olympic hockey team, Harper contacted Governor General Michaëlle Jean to request prorogation. The fact that the representative of the unelected hereditary Queen of England has any say in the democratic life of Canada is indictment enough of the entire system. This year Harper didn’t even bother to get in his car; he phoned it in. Maybe next year he’ll do it by text message. Their plan is to re-open Parliament in March with a new budget containing massive cuts and attacks on workers.

Political pundits predicted that nobody would care and Stephen Harper said as much. However, it appears that they have grossly miscalculated. Over 200,000 people joined an anti-prorogation Facebook group. This was written off until polls came in showing that approximately two-thirds of the population oppose the cynical move and support for the Conservatives plummeted from just above 40% to the low 30’s. The large protests last weekend show that this is an issue that has crystallized opposition in the country.

What was noticeable about the demonstrations was that for many people this was their first time out on the streets. It was not the “usual crowd.” This brings both strengths and weaknesses. It is indicative of a deep malaise in society, but without an organized political outlet this movement is bound to dissipate. This movement also expresses an important contradiction. Voter turnout in elections has been steadily declining to a point barely above 50% in most federal and provincial elections. However, people are prepared to come out to oppose what they see as an attack on “democracy.” That is, “small-d” democracy – the rule of the majority of the people. This contradiction is the beginning of an understanding, long held by Marxists, that the capitalist Parliament does not represent the will of the people. In an instinctual way the mass abstentions show that people understand that no matter who you vote for, the banks and corporations always win. However, these protests and opposition to the blatantly undemocratic actions of Harper and Co. are proof of a growing yearning for genuine majority rule.

The other glaring contradiction of this mobilization is their confused political content and the inability of the NDP and labour movement to take the lead in the defence of democratic rights. The protests were billed as non-party political and neither the NDP or the Liberals have been able to capitalize on the drop in support for the Conservatives. The presence of Liberal leader Michael Ignatieff at the Ottawa rally is actually a point of weakness, and not strength, of the movement. The Liberals, the natural party of Canadian capitalism, are in fact responsible for the Afghan mission and there was just as much torture under their tenure as there has been under the Conservatives. Anybody who believes that they would act any more democratically in government than the Conservatives should really join the Marijuana Party. If the movement continues in its present class collaborationist formation, with demands acceptable to the Liberals, then it will go nowhere.

The NDP and the unions need to put themselves at the head of this movement and extend it beyond the issue of prorogation. It has been said that democracy is great, but you can’t eat it. There need to be concrete demands that would make real change in the lives of people. “Stop the torture; bring the troops home” must be the first slogan of the movement. “No cuts! Bail out the workers and not the bosses” is the key economic demand in response to the planned attacks once Parliament is re-opened. And finally, we need to fight for a society where the majority rules, both politically and economically. Prorogation and the interference of the monarchy are not minor aberrations; they are merely the most glaring symptom of how bourgeois democracy is no democracy at all. Let’s fight against the dictatorship of the bosses and for a genuine socialist workers’ democracy.