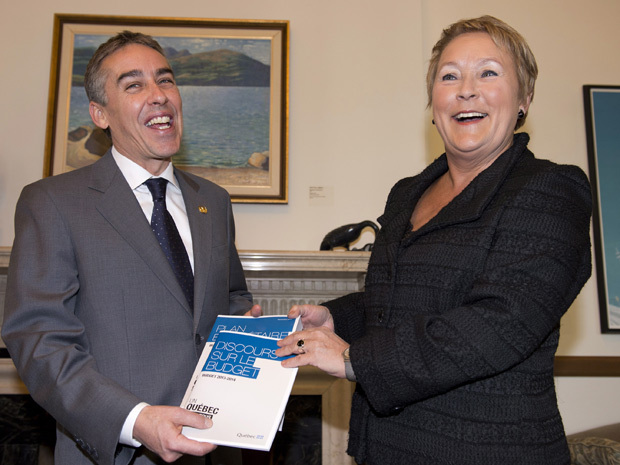 Last week the newly elected Parti Québécois government tabled their first budget since taking power. Finance minister Nicolas Marceau vowed to “balance the books” and “cut spending” in what is a clear austerity budget; new expenditures are being increased by the lowest amount in 14 years and almost no new money has been allocated to education spending. The government is also promising to pass a zero-deficit budget for 2013/14. Within an extremely short period since being elected, the PQ has now shown their true colours as a party subservient to Quebec big business, in line with the general austerity plan of the recently ousted Liberal Party.

The announcement of this budget, which is a complete 180-degree turn from what the PQ campaigned for in the September provincial election, has been applauded by the business community and right-wing political pundits. La Presse columnist Alain Dubuc wrote an article titled, “Tout ça pour ça?” (All of that, for this?), which accurately portrays the feelings of the political establishment in Quebec. Dubuc celebrated the budget for it “appears to announce the return to reality of a party that got carried away during the election campaign.”  He also added that the budget marked a return to the “economic consensus” the PQ has long shared with the Liberals and the even more right-wing Coalition Avenir Québec (CAQ).

The reception of the budget by the business community was just as cheery. Françoise Bertrand of the Quebec Chamber of Commerce stated, “I think our message was heard and that the government took it into account.” Yves-Thomas Dorval of the Quebec Business Council also applauded the government’s commitment to return to a balanced budget by 2013/14. This marks a hard lesson for those students and workers who voted for the PQ in order to kick out the Liberals. What has really changed?

Marois turns on the unions

On several occasions during the provincial election, Pauline Marois was accused of being “in bed with the unions” by the right-wing populist François Legault, the leader of the CAQ. In turn, Marois countered Legault by saying that “these are the workers of Quebec.” As we predicted in our post-election analysis, this was little more than opportunism on the part of the PQ; the party sensed the anger present in Quebec society and tapped into it to win power, but we cannot forget the PQ’s genuine masters — the Quebec bosses.

The PQ’s tone has changed sharply since the election. One such example is the PQ government’s treatment of the province’s doctors. Health minister Réjean Hébert is claiming that the Quebec government “will not change the [new] contract” with the province’s doctors, but at the same time is asking doctors to put in a “little effort” in helping the government to balance the province’s books — a clear example of the doublespeak the PQ has perfected.  The PQ’s plans to balance Quebec’s budget largely depends upon being able to get concessions from the doctors.  Marceau has already suggested that the doctors’ planned pay increase of 9.2% may have to delayed by as much as seven years.  This contract took years to pry from the previous Liberal government was put in place to bring the wages of Quebec doctors up to that of the Canadian average.  The PQ’s “request” to the doctors amounts to little more than a threat — give up your pay raise voluntarily or we will legislate it away from you.

This has caused great anger amongst doctors. Dr. Gaétan Barrette, president of the Fédération des médecins spécialistes du Québec, said that his members have been ringing his phone off the hook since Finance Minister Marceau made the suggestion that their pay increase should be delayed. As well, the head of Quebec’s federation of general practitioners, Louis Godin, said that it has taken Quebec doctors years to reach an agreement and that he considered any attempt to delay the process to be unacceptable.

Included in the budget is also a plan to slash 2,000 employees from the 22,500-strong workforce at Hydro-Québec. These jobs will be lost through attrition in order to pay for limiting the hydro increase imposed by the previous Liberal government. The four unions at Hydro-Quebec have criticized this move for its “lack of vision” and have asked the government to restructure their plan.  The PQ’s response to all of these demands is that there is no new money on the horizon. With these attacks on unionized workers, as well as many public contracts coming up for negotiation, we could see a fierce union struggle in the near future if the labour leaders do not back down.

Will the tuition increase really be abolished?

Perhaps the most notable action committed by the new PQ government after its election was the “abolishing” of the hated tuition increase.  However, it is more accurate to say that the tuition increase has simply been delayed for the moment, at least until the education summit meets at the end of November.  The halting of the tuition increase was the most visible promise made by the PQ during the election campaign and, without hyperbole, won the election for them.  Heading into the summit now, Education minister Pierre Duchesne is cautioning everyone that there is “no way of thinking our position will be predetermined.”

It is becoming increasingly difficult to imagine that Quebec tuition fees will be frozen for any great amount of time.  As mentioned earlier, the budget has the lowest spending increase seen in Quebec in over a decade.  The PQ’s election platform promised $150-million to the province’s universities to compensate them for the lost revenue resulting from the cancellation of the tuition hike. However, the budget contains no concrete funding promises for education — simply a vague statement along the lines that the government “could compensate universities.”  Student leaders are now rightfully wondering how the PQ will pull off the magic trick of keeping tuition at the same level without injecting more money into education.

Obviously this does not bode well for students. If the government backtracks on the tuition freeze, even if it is less of an increase than the Liberals has tried to impose, this could serve to re-ignite the student movement in a short period of time. 60,000 university and CÉGEP students went on a one-day strike on 22nd November, including holding a sizeable demonstration of 5,000 in downtown Montreal.  This is just a small rumbling of what could come if the government does not follow through with their election promise.

The massive strike movement that shook the province during the spring and summer has also drastically politicized students who have moved sharply to the left after getting a firsthand political lesson at the end of a matraque (baton) during the summer.  During the strike, ASSÉ’s membership increased from 45,000 to 70,000 students, with thousands voting to disaffiliate themselves from the more conciliatory FECQ (Quebec Federation of College Students).  This process is continuing; CÉGEP students are pushing through with what is being called “the largest wave of disaffiliation attempts in such as a short period of time in the history of the Federation [FECQ].” (Le Devoir, 24 Nov. 2012)  It does appear that this is the Quebec students’ punishment of the FECQ leadership for their conciliatory attitude during the strike; whether or not this has been accelerated by ex-FECQ leader Léo Bureau-Blouin having been elected as a PQ member of the National Assembly will be left to our readers’ judgement!

Fight back against the budget of the bosses and the austerity agenda!

As if backtracking on social investment and attacking unions wasn’t enough to gain the confidence of big business, the PQ is now offering a 10-year tax holiday for any investment of $300-million or more. This is going hand-in-hand with their general plan to slash social expenditure by $1.5-billion per year over the next five years and to impose severe belt-tightening measures on most ministries, agencies, and Crown corporations. Where will this $1.5 billion be pulled from? As Quebec business gets handouts, it is clear that it will be workers and students who can be expected to foot the bill through the continuation of the same austerity policies pursued by the previous Liberal government.

As a worker or a student, it is clear that this government is not on your side. For all of the posturing during the strike and during the election campaign in order to opportunistically gain the support of the streets, the PQ has once against proven itself to be a reliable agent of Quebec big business.

Austerity capitalism can no longer provide an increase in the standard of living for most people; the ruling class, regardless of whether they are PQ or Liberal, is imposing their solution to the crisis — deep cuts to the social wage, attacks on the unions, and a tax holiday for big capital. It has become more pertinent than ever for us to have our own party, a party of the workers and youth, based on a socialist perspective that exits this destructive capitalist logic which only means misery. The union leaders should learn the lesson that we need to form our own party to fight for our interests which are obviously opposed to the Parti Québecois.  The only party at the moment that is opposed to austerity is Quebec solidaire. With this in mind, the unions, Quebec solidaire, and the labour-backed NDP (who continue to poll high in Quebec) need to come together with the task of forming a united anti-austerity party and become the parliamentary voice of a mass movement to fight the agenda of the bosses, no matter what party represents them.