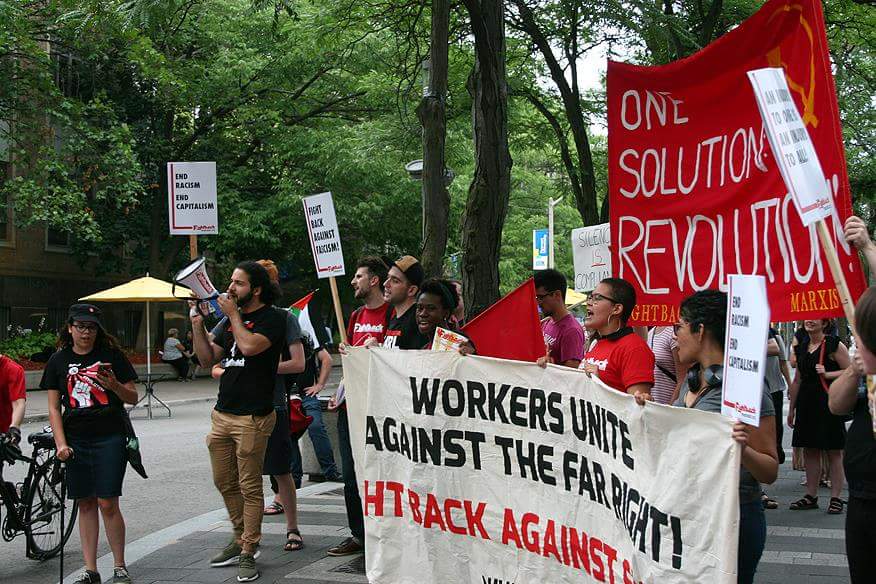 The movement against the alt-right won another victory on Tuesday, August 23 in Toronto. This was the date of a supposed “free speech” event organized by Islamophobic, transphobic, and racist commentators associated with Rebel Media, Canada’s equivalent of Breitbart. Coming just over a week after the killing of Heather Heyer in Charlottesville, the community reaction was predictably explosive. The right wingers also made the mistake of holding their hate-filled event at Ryerson University in downtown Toronto, which has a successful Socialist Fightback Students club. Under pressure from the community, the university administration shut down the alt-right. But the community still organized a successful celebration of this victory.

About 200 people came out to a lively and upbeat rally. Chants of “Whose streets? Our streets!” and “No Trump! No KKK! No racist USA!” echoed off the nearby buildings. Invited speakers were present from ACORN, SAFE, CAWSI, Fightback, and other organizations and communities.

Fightback, supporters of the International Marxist Tendency in Canada, played a prominent role in the protest and had a large contingent present. Marco La Grotta from Socialist Fightback Students at Ryerson attacked the hypocrisy of the alt-right hiding behind the mask of so-called “free speech”. These same people didn’t hesitate to shut down the freedom of speech of the left or of oppressed communities. For example, these were the same people who called in a threat and pulled the fire alarm on over 100 people opposing Trump’s inauguration at Ryerson in January. And what respect did they have for the rights of protesters being attacked in Charlottesville?

Farshad Azadian from Fightback’s editorial board explained that from Charlottesville to Toronto, Vancouver to Boston, people were uniting against the racist far-right. He highlighted the role of the capitalist system, the war on terror, and the fact that racism exists because it is profitable. He ended with an appeal for those present to get organized to counter the right – who are also organized.

Other speakers did an excellent job of highlighting the different aspects of right-wing oppression and the role of the Trump White House. The protest gained widespread media attention.

This celebration was just one victory in a wider struggle against the right wing. Capitalist society in crisis is increasingly polarizing between right and left, while the so-called “middle” that defends the status quo is discredited. However, the balance of forces between the right and left are not equal. For every one sad individual that turns to the far-right, 100 or 1000 turn towards socialism. We saw this with the mass protests in Vancouver and Boston, and this small victory in Toronto. It is also vital that the organized workers movement takes its rightful place in leading the anti-fascist struggle and uniting the workers and oppressed. The Longshoremen in San Francisco recently passed a resolution to shut down the port in the event of fascist marches in the city. This is the way forward! The International Marxist Tendency and Fightback will do our duty in opposing the far right, while explaining that the roots of this cancer lies within the capitalist system itself. Only a socialist alternative to the failed status-quo can defeat the right-wing alternative to the status quo.