“Anybody But Conservative” campaign weakens fight against Liberal austerity 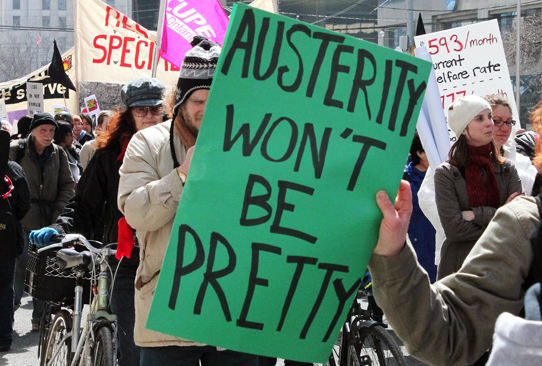 As summer draws to an end, it appears that so is the Liberals’ generosity towards Ontario’s public-sector workers.  In order to maintain their hold on power at Queen’s Park earlier this summer, Kathleen Wynne and the Liberals made all sorts of overtures to the province’s labour movement, promising that the new Liberal government would treat labour with respect and raise workers’ standards of living, unlike Tim Hudak and the Conservatives — and unlike the Liberal governments of the past 11 years.

Unfortunately, many of the province’s labour leaders went along with Wynne’s charade.  Across the province, and especially in the Greater Toronto Area, most of the unions encouraged their members to vote for the Liberal candidate in their riding in order to keep Hudak and his anti-labour agenda out of office.  This “Anybody But Conservative” tactic worked as the Liberals were rewarded with a majority mandate and the Conservatives suffered an embarrassing defeat, dropping nine seats at Queen’s Park and forcing Hudak to resign in disgrace.

But, we warned at the beginning of the campaign that the labour leadership needed to be careful what it wished for.  Certainly, the defeat of Hudak’s so-called Million Jobs Plan, which would have seen 100,000 public-sector workers sacked and billions of dollars handed to businesses through further tax breaks, should be celebrated.  However, the Liberals’ masters on Bay Street will make sure that a Liberal government places the burden of the ongoing economic crisis on the shoulders of the working class, despite the rosy image that Wynne portrayed during the election campaign.  Just weeks into her new mandate, this is exactly what is happening.  Giving any sort of illusion that Kathleen Wynne and the Liberals are different than the Tories will only disorient the labour movement and weaken the province’s workers in their fight back against the austerity agenda.

Now, as many public-sector contracts are set to expire, the reality of a Liberal majority government is beginning to set in.  When the Liberals first presented their budget before the election call, many labour leaders (and even some “lefts”) were hailing it as the “most progressive piece of legislation in 20 years”.  Many of these individuals savaged the NDP for voting down the budget and calling the election.  However, the Liberals’ budget is looking very different these days. After the election, and with the exact same budget being put forward at Queen’s Park, suddenly the nasty aspects of the Liberals’ spending plan began to be noticed.  For instance, the Globe and Mail’s editorial board concluded, “On second thought, this might hurt.” It summarized the budget thusly: “The actual budget, the Liberal government’s multi-year spending plan, is an austerity budget. Or at least that’s what’s promised. The budget calls for no new spending for three years…. If the Liberal government sticks to this budget, there will be pain. There will be hard choices. And there will be disappointed supporters.”  (14 Jul. 2014)  This is certainly a far cry from the riches highlighted by the labour leaders prior to the election!

However, there are certain labour leaders who still appear to have their heads stuck in the sand and are refusing to come to the realization that the next four years of Wynne’s government are set to bring in some of the worst cuts and attacks ever seen in the province.  They continue to deny that the “Anybody But Conservative” campaign ignored the anti-worker policies present within the Liberals’ own platform.  According to analysis from Bloomberg News, the Liberals’ budget is set to cut per capita government spending by the same amount as Mike Harris and the Tories did in the mid-1990s — the same Mike Harris government that prompted the Days of Action and brought the province to the verge of a general strike.

In an op-ed piece on Rabble.ca, Ontario Federation of Labour (OFL) president Sid Ryan proudly trumpets the fact that thanks to labour’s mobilization, Hudak and the Tories were defeated in the provincial election.  Ryan writes, “Just think about it.  Had Hudak won the election Ontario would have suffered the wholesale slashing of 100,000 public sector jobs, which would have triggered 67,000 more job losses in the private sector…. But there was none of this, because we prevented Hudak from winning the election in June.”

Ryan continues, “Hudak’s Conservatives came very close to wiping-out unions in Ontario. Hudak led the polls for months, and almost every day of the election. But 500,000 more votes were cast on election day than back in 2011, and thanks largely to our campaign, they went to parties other than the Conservatives.”

However, the OFL’s campaign pushed many of those votes towards the Liberals — the same Liberals who have plunged workers’ living standards through the ground and are set to impose some of the harshest austerity measures ever seen in Canada.  And despite this, Ryan continues to present a soft tone when it comes to the Liberals’ budget, saying, “There is a lot worth supporting.”

In a similar vein, Sam Hammond, the president of the Elementary Teachers’ Federation of Ontario (ETFO), admonished his members who believed that Wynne and the Liberals “owed” something to the labour movement for defeating the Conservatives.  At the recent ETFO annual convention, Hammond stated, “The premier has made no promises.  The premier owes me nothing or the labour movement nothing per say. We need to, on behalf of my members, build a relationship with this government going forward.”  (Toronto Sun, 11 Aug. 2014)  This is a complete slap in the face to the province’s teachers who, two years ago, had their right to collective bargaining and strike taken away by the Liberal government.  As this article is being written, teachers’ contracts are set to expire and the Wynne government has already indicated that there will again be no new money for teachers at the bargaining table.

Pronouncements such as those by Ryan and Hammond only help to disillusion and disorganize workers who are ready to defend their wages, benefits, and their standard of living.  Ryan was correct in stating that it was workers who defeated Tim Hudak and the Conservatives’ anti-labour agenda.  But through the misleadership of the labour leaders, Ontario workers instead handed power to Wynne and the Liberals, who are just as big an enemy as the Tories.  If the leadership of the labour movement continues to sow illusions in the Liberals, this will only confuse workers and weaken the fight back against the Wynne austerity agenda, allowing the Liberals to push ahead with their cuts and attacks on the province’s workers.

The bosses have two parties, the Conservatives and Liberals. They act just the same as management at the bargaining table. Hard bargaining employers are getting what they want by putting forward incredible concessions, like a 50% wage cut and destruction of the union, at the beginning of negotiations. This terrorizes the workers so much that there is incredible relief at signing a contract with only a 10% wage cut — which is what the boss wanted all along! On the political front, the Conservatives created a panic at the proposal to fire 100,000 workers. This pushed the workers’ leaders behind the Liberals who plan on laying-off at least tens of thousands of workers. We cannot accept this shell game!

Worryingly, labour leaders across the country have taken stock of the “Anybody But Conservative” campaign in Ontario and now hope to apply it in next year’s federal election.  As with Hudak, a defeat of the Harper Conservatives would be a cause for tremendous celebration by working-class people across Canada.  But, would electing Justin Trudeau and the Liberals really resolve the crisis facing workers and youth across the country?  Would Trudeau truly halt the attack on public-sector workers and government services?  Let us not forget that when the hated Brian Mulroney government was kicked out of office in 1993, the Jean Chrétien/Paul Martin Liberals proceeded to devastate the federal public service.  The cuts and attacks of the time continue to afflict workers today.

Sid Ryan has traditionally been seen to be further on the left of the labour movement and during the provincial election campaign, had a justifiably sharp critique of the NDP’s election platform.  Ryan was absolutely correct in criticizing some of the right-wing points in the NDP’s program, such as the promise to establish a government ministry that would be responsible for cutting $600-million worth of spending every year. The program put forward by NDP leader Andrea Horwath did more to cater to Bay Street than the party’s working-class base, and did little to attract workers to the NDP fold.  But, Ryan’s cozying up to the Liberals is little different than the rightward shift by the NDP leadership; both tactics are two sides of the same coin — weakening workers’ morale and making it easier for the bosses’ to put forward their austerity agenda.

The mobilization seen under the “Anybody But Conservative” campaign was, in certain respects, a breath of fresh air and as Ryan states, something that had not been done in Ontario in 20 years.  But, this sort of mobilization would have been a lot more useful and productive if instead of sowing false illusions in the Liberals, Ryan and the OFL leadership had organized workers to take back the Ontario NDP from the right-wing leadership, pushing for pro-worker socialist policies that answer the problems facing young people and workers today.

Now, we are stuck with Wynne and the Liberals, and the austerity agenda that they will be forced to implement by Bay Street. Labour must connect with all workers across the province — both unionized and non-unionized — to inform them of the coming attacks, and to begin building genuine working-class solidarity that can shut down the province once the government begins to attack any sector of the labour movement.

Hudak was defeated, but the job is not yet done.  Let’s begin the organizing to beat back the austerity agenda!