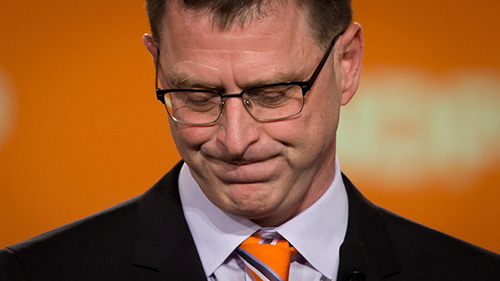 The BC NDP’s loss in May came as a huge surprise to many, both in and out of BC. The party was expected to sweep the election, and many workers hoped that the party would undo much of the damage caused by over a decade of austerity under the Liberals. Instead, the party finished a disappointing second, failing to win over most of the working class that it was supposed to represent. Why did this happen? According to the BCNDP Election Review panel, it was a series of communication errors and poor campaign choices. But we need to dig a little deeper here to see what is really going on.

After the dismal results of the 2013 election the BCNDP appointed an election review panel to find the root causes of their election defeat. The panel produced a 19-page document, which goes into every detail of the campaign and the political structures behind the election. The review said all the mistakes that were made were in terms of communication.  The review mentions that more than half of interviewed voters “could not identify” how the policies would affect their everyday lives. The report blames this on poor communication of the platform. It was too confusing, voters were unwilling to read it, there was no simple “ballot box question”, etc. Everything is blamed — from the focus of the media, to Liberal attack ads, to the “stay positive” promise made at the start of the campaign.

At no point did the review question whether the platform resonated with ordinary working class people. Of course, voters cannot identify what changes will impact their daily lives when none of them will. It doesn’t matter how well the platform is communicated to voters if it is the wrong platform. Even within the NDP, more than half of the membership of the party felt that the platform did not reflect their own politics or beliefs. This shows the great gap between the ordinary membership of the party, who have more left wing ideas, and the party leadership, which represents a much more conservative set of ideals.

In the years leading up to the campaign, the NDP built a platform focused on proving that the NDP could manage capitalism better than the Liberals. Nothing could make this approach clearer than the election motto, “Change for the better, one step at a time.” Workers and youth today are suffering from the burdens of austerity under capitalism; they are not going to mobilize for a party promising change in some distant future. They need real socialist policies now.

The platform made no secret about its lack of leadership and vision. Costs will “be reduced” for post-secondary education, childcare, and prescription medicine. For many workers and youth, these necessities are so far from being affordable that just reducing costs will not change their quality of life. The NDP should be fighting not to simply cut costs but to make these services free of cost. Improving transportation infrastructure is not enough for workers who are spending too much of their income on public transit; the transportation system needs to be made free to ride. Socialist policies such as these would have mobilized real support amongst workers and youth.

The platform very carefully discussed how to pay for small reforms, with the view of being better at running capitalism than the capitalist Liberal Party. The problem with this is that it prevents the discussion of anything other than small reforms. Without a willingness to discuss socialized ownership of production, the NDP cannot promise the policies that would mobilize workers and youth to vote for them. This platform reflected an unwillingness of the party leadership to actually fight for the working class. The bureaucracy thought that they could simply gain power by riding a wave of hatred for the Liberal Party.

The central bureaucracy insisted on controlling every part of the campaign. From southern Vancouver Island to Fort St. John, local organizers and genuine working-class members expressed frustration at their inability to create a campaign that met their local conditions. Instead, they were supposed to be presenting a “well-crafted” message from the central campaign office to their communities. This is exactly backwards. Dictating carefully controlled policy messages, without regard to the actual interests of the people the NDP is supposed to represent, is a sure recipe for defeat. The key issues need to be decided at the local level by ordinary working people and then be communicated to the central party. Locally organized and oriented campaigns would engage huge amounts of workers and youth who might not ordinarily vote at all. The leadership needs to be guided by the membership, not the other way around.

Faulty polling is also taken to be a key reason for the defeat of the NDP. These surveys ended up sampling the opinions of youth disproportionately. The review takes this as a reason for defeat, since youth are so much more unlikely to actually vote on Election Day. Although poor sampling is a problem in a political survey, the bigger issue is the lack of youth voting. It takes more than lip service to engage youth. Youth may respond positively during a survey on the phone, but there is a huge difference between casually agreeing with something and actually caring about it enough to organize and fight for it. The NDP did not inspire this drive in youth. This is the real crisis — not poor polling.

Similarly, the report mentions “non-English speakers” as being sampled very poorly. According to the review panel, the NDP failed to “craft a message” that engaged them, and failed to engage with them in publications in their native language. Superficially this is correct, the NDP did a poor job of reaching out to these communities. However, the question should not be, “Why did we not hire enough translators,” but rather, “Why do we not have more diversity in the party.” The NDP needs to do more than “reach” non-English speaking communities on Election Day; it needs to be involved and engaged with these communities constantly to develop long term, local relationships. It is only through these organic connections that the NDP can begin to bring more diversity into the party. The party needs to become a natural way for these communities to express their voice, not just another group of white politicians pandering for their votes.

Nowhere was the scapegoat of poor communication more clear than in the discussion of the “stay positive” promise during the campaign. At the beginning of the campaign, Dix promised that the NDP would only focus on the positive promises it was making and not focus on the huge number of Liberal scandals. The media leaped at this as an opportunity to criticize every statement as being too negative for their promise. Rather than take a firm stance and explain the difference between criticizing policy and criticizing individuals, the NDP caved into these accusations and ignored much of the Liberal track record of government. This is a track record which includes some of the greatest attacks on the working class, including healthcare, education, and social work cuts, not to mention the repeated scandals and huge corporate tax breaks benefiting only the rich. This is a track record deserving of criticism, and should not be ignored. The NDP needs to present itself as a real alternative to failed Liberal austerity, and differentiate itself on a class basis.

The report notes that this focus by the bourgeois media on the NDP’s stay positive campaign and the likelihood of the NDP winning, made it seem like the NDP was a “government in waiting”, and had to do more to “manage voter expectations”. A workers’ party will always be forced by our current capitalist system to fire up its members and supporters by offering bold policy in line with the working class’ interests. These policies will not be popular with the ruling class and will require the active support of the population to defend them. Youth and workers in BC will not support a party that tries to manage their expectations. A clear policy in clear opposition to those of the bourgeois parties must be central to the NDP if it is to gain electoral success.