Bureaucratic Game of Thrones as Unifor Leaves the CLC 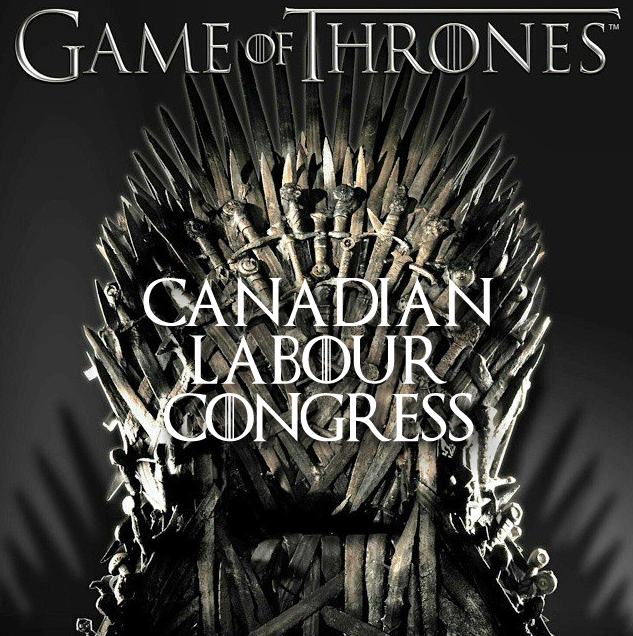 On January 17th, Unifor, the largest private sector union in Canada, representing more than 315,000 workers across the country, disaffiliated from the Canadian Labour Congress (CLC). This move will have serious negative repercussions for the Canadian labour movement, undermining the unity of the working class at a time when major corporations like Tim Hortons are launching significant attacks on workers in an attempt to claw back the recent increase in the Ontario minimum wage. In a letter to CLC President Hassan Yussuff, Jerry Dias, the National President of Unifor, claims that Unifor is disaffiliating from the CLC because of, “an inability of affiliates of the CLC to allow Article 4 [procedure for locals to disaffiliate from parent unions] to be applied as it was intended.” He also claims that “the CLC lacks the ability to ensure U.S.-based unions have legitimate elections of Canadian leadership and as a result American-based unions are able to impose their will on Canadian locals.” This is a clear reference to the attempt of Unifor to orchestrate a raid of ATU local 113 last February. There are also claims circulating that Unifor is signing cards at Unite HERE, local 75, which was recently put under trusteeship by the US based international union. We at Fightback are completely opposed to this anti-democratic and heavy handed trusteeship, which was rejected by members of local 75 at a membership meeting. At the same time, we must recognize that Unifor signing cards to attempt to take over local 75, immediately after leaving the CLC, will do nothing to build workers’ power and will only lead to further divisions in the labour movement. If Unite HERE local 75 wants the autonomy to take the fight to the bosses, it would be a poor decision to side with Jerry Dias, whose record as national President of Unifor involves undermining local democracy and pushing concessions and two tier contracts.

Jerry Dias’ record as President of Unifor has been consistently right-wing, making concessions to the big auto companies while supporting capitalist politicians. Under Jerry Dias, Unifor called for “strategic” voting for the Liberals in the last election, despite the fact that the Liberals are a party of Bay Street and that some of the harshest cuts to social spending in Canadian history have come from Liberal governments. During this same federal election campaign, Jerry Dias put pressure on the NDP not to criticize the Canadian government’s $15 billion Saudi arms deal because of his narrow interest in preserving weapons manufacturing jobs. Rather than insist that the armoured vehicle factories be nationalized and repurposed to produce something Canada desperately needs, like transit vehicles, Dias stood in favor of a weapons deal providing armoured vehicles to the Saudi regime, which is presently engaged in a genocidal slaughter of the people of Yemen. Perhaps most egregiously of all, Jerry Dias donated $300 to Kellie Leitch’s Conservative Party leadership bid, during which she called for screening immigrants for “Canadian values,” a level of overt racism even Conservative Party members were not prepared to stomach.

This right-wing record has also been reflected in bargaining. In the last round of bargaining with General Motors, the leadership of Unifor threw young workers under the bus with a two-tiered agreement on pensions. This meant that while the existing workers would continue with a defined benefit pension plan, new workers would only have a defined contribution pension plan, leaving them at the mercy of the market. This agreement — which faced a low ratification vote of 64.7%, indicating widespread dissatisfaction — was trumpeted by Jerry Dias as “a historic agreement to secure a future for our members.” Cory Weir, a rank and file member of Unifor local 222 at the GM Oshawa plant, called on his fellow members to vote down this contract because “the tiered worker problem is not fixed; we just have a new name.” One local in Oakville that defied this sellout and rejected the deal was accused of breaking solidarity. This turns the meaning of “solidarity” on its head, as the word is meant to level up, not level down!

One of the ironies of this entire spectacle is that, on the major issues facing the Canadian labour movement, there is not all that much difference between Hassan Yussuff and Jerry Dias. Both have pushed union resources to support the Liberal Party. Yussuf even invited Trudeau to speak to young workers, but received a shock when those workers turned their backs on the Liberal leader. The CLC, like Unifor, was pushing strategic voting in the most recent federal election, which in most cases meant support for the Liberals. While Yussuff does deserve criticism for his handling of the CLC’s anti-raiding procedures as CLC President, it certainly cannot be said that he has been unfair to Unifor. On the contrary, he suspended article 4 of the CLC constitution to enable a possible Unifor raid of ATU local 113, a move he was forced to retract after outrage mounted from many other affiliates. Both the CLC under Yussuff and Unifor under Dias played a nefarious role in ousting Sid Ryan as President of the OFL, after an anti-democratic dues strike by OPSEU and ONA succeeded in doing what they were incapable of in elections at the OFL convention.

Throughout the conflict with the ATU and in the present withdrawal from the CLC, Dias has made appeals to Canadian nationalism, claiming to be standing against American interference in the Canadian labour movement. At the same time, however, Dias has been willing to bend to right-wing populism, demonizing Mexico and siding with the Trump regime. While meeting with Wilbur Ross, US Secretary of Commerce and founder of the International Coal Group (a company responsible for robbing the United Mineworkers of America’s pensions through legal loopholes in bankruptcy law) Dias said, “NAFTA will never be fixed unless Canada and the U.S. stop losing good paying manufacturing jobs to Mexico. A united front is needed to pressure Mexico to significantly increase wages or face retalitory (sic) measures.”

Jerry Dias claims to be standing up for local democracy as a pretext for raiding other unions, but for rank and file members in Unifor, there is a different picture. Cory Weir says that, “We are told we are champions of democracy, but as a Unifor member I see an appalling lack of it in my own union. Our membership gave no mandate to leave the CLC; what then of democracy? When our national pursued a raid on ATU 113 where was our democratic input as rank and file members? It was conveniently missing, because these buzzwords are only garbled out when it fits the narrative of our tightly controlled democracy. Intimidation and silencing of dissent only matters when another union is accused of it; internally it is business as usual for the careerists running the Unifor show.” The decision to leave the CLC is one of great magnitude, and yet this decision was made without any input from the Unifor membership. It was not discussed at union local meetings, or voted on at a Unifor convention. That such a significant decision was made by the Unifor National Executive Board without any consideration for rank-and-file members, shows that we cannot trust the crocodile tears Jerry Dias cries for local democracy in the ATU or Unite HERE, whatever the shortcomings of these international unions.

One of the immediate consequences of this decision by the Unifor National Executive Board to disaffiliate from the CLC will be to provoke a line of disunity amongst union activists working in labour councils and common campaigns. Resources will be wasted fighting raiding attempts rather than dedicating them to organizing the unorganized. There are already reports that Unifor activists at the Ottawa District Labour Council have been told they will no longer be welcome even to attend.

It is worth noting here that both Chris Buckley, President of the Ontario Federation of Labour, and Hassan Yussuff, President of the CLC, are members of Unifor. However, while local activists face uncertainty over how this decision will affect their ability to participate in the labour movement, Yussuff’s statement on the Unifor disaffiliation does not suggest either he or Buckley will be stepping down, even though they are no longer members in good standing of CLC affiliates. Unlike the Unifor activists wondering whether or not they will be able to continue playing their present role in the labour movement, Buckley and Yussuff have a record of class collaboration not very different from that of Jerry Dias. Indeed, at the 2016 Toronto Labour Day parade Dias, Buckley, and Yussuff all marched down the street arm-in-arm with the Liberal Ontario Minister of Labour, Kevin Flynn, who was attending as a guest of honor. This same Liberal Minister of Labour recently ended the OPSEU strike of Ontario College faculty by legislating them back to work in an egregious attack on the right to strike. It would seem that there is one standard for rank-and-file members and activists and another for careerist bureaucrats.

While the actions of the Unifor leadership are utterly reactionary, it is wrong to state that the rest of the labour leadership have played a positive role in the recent period. Trusteeship, two-tier contracts, concessions, and a lack of member-driven democracy and organization, are endemic in organized labour. According to Statistics Canada, from 2009 to 2017 the average wage increase in union contracts was 1.56%, while the average rate of inflation was 1.57%. This means that overall, standard of living has stagnated. These numbers actually prettify the crisis, as they do not capture the erosion of pensions and benefits for new hires. Workers understandably feel disenfranchised when their organizations either take them backwards or leave them to stagnate, while violating rank-and-file control and engaging in self-defeating raiding practises. The entire leadership of the movement has failed and needs to be replaced by those who are willing to fight. Mike Palecek, the National President of the Canadian Union of Postal Workers complained that, “It is sometimes difficult to tell if this is the labour movement, or an episode of Game of Thrones. Workers have little interest in pissing-matches between labour leaders. In order to challenge capitalism, we need a broad, united working-class movement.”

The labour bureaucracy has to move away from this sick “Game of Thrones” and unite against the common enemy. As Tim Hortons franchisees attack their workers, taking back benefits and paid breaks, there has never been a better time to organize this sector. Unifor, and all the CLC affiliates, must dedicate a massive increase in resources to organizing the unorganized, rather than fighting over those workers already in unions. There needs to be a cut in the fat bloated salaries and expense accounts of the union executives, who need to live on a worker’s wage to understand the life of real workers. Those freed up resources need to be dedicated to organizing new workers, and campaigning against Liberal and Conservative austerity. The labour movement must reject concessionary and two-tier contracts, and prepare to wage the strikes necessary to do this. We must link economic and political struggles by vowing to defy the removal of the democratic right to strike by “back-to-work” legislation. It is essential that unions be put under workers control, with the right to elect and recall all representatives, so that the old tired misleaders can be replaced by those who are willing to struggle. Above all, we must win the unions to a socialist class-struggle perspective that aims to organize working class people not just against this or that manifestation of capitalist exploitation and oppression, but against the capitalist system itself. Such a perspective will enthuse workers, and show that they can fight back and win, rather than be stuck with the current miserable spectacle that we see in organized labour today.