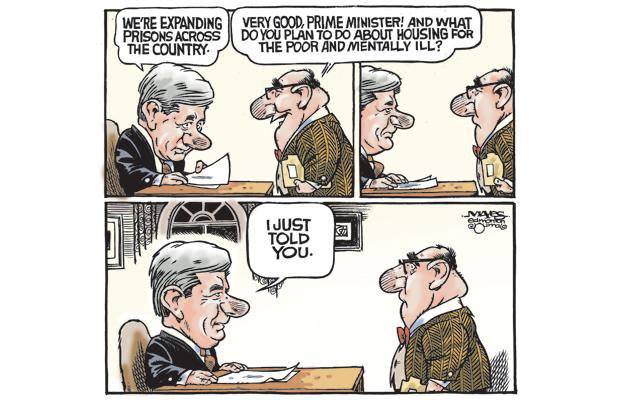 Prison populations are rapidly increasing, far outstripping the capacity of the provincial and federal prison systems in Canada. The Ontario Ministry of Community Safety and Corrections revealed that Ontario prisons had reached 98.5% capacity, representing a six-year high. This meant that on any typical day during 2012 about half of Ontario’s 25 prisons were overcrowded (at over 100% capacity).

Some of the worst overcrowding rates are in Toronto, Windsor, London, and Niagara regions which have been chronically overcrowded for many years. Toronto’s Don Jail was at 117% capacity, the Windsor Jail was reported at 111% capacity, and London Jail at 105% capacity. Typically those detained in provincial jails are awaiting bail or trials, or they are serving shorter sentences (less than two years).

This has created an enormous strain on the prison system, with the practice of overcrowded cells becoming very common. It is has become typical practice for three inmates to be packed into a cell meant for two inmates. Often, inmates are forced to sleep and even eat on the cell floor. A lawyer, presenting a lawsuit on behalf of inmates, reported incidents where cells with a single bunk bed would be shared by as many as five inmates in London.

This practice has been linked to increased conflicts and violence within the prisons. According to the Ministry, it is expected that the number of inmates in Ontario provincial prisons will increase by 1,500 by next year due to the tough-on-crime laws passed by the Harper federal government.

The situation in federal penitentiaries, where longer sentences (greater than two years) are served, is similarly facing a crisis of overcrowding and is at an all-time high. From 2003 to 2013, the federal prison population went from below 12,000 to over 15,000. The practice of “double-bunking”, where two (or more) inmates share a cell meant for a single inmate, has rapidly increased. This has been a glaring problem in Ontario and the Prairie regions, where 26% of offenders were “double-bunked” from 2012-2013.

The federal Conservative government has overseen this rise of prison population with its tough-on-crime agenda. This has been a coupled with a rapid increase in spending for federal prisons, with $2.6-billion being spent annually by the Correctional Service of Canada (CSC). This represents an increase of 40% over five years, which includes significant spending on 2,700 new cell spaces.

Despite the construction and expansion of prisons, which will provide new cell spaces in the federal penitentiary system and is set to be complete by 2015, Auditor General Michael Ferguson reported that the problem of over-crowding would only be solved in the “short-term”.

Ferguson said that within a few years of completing construction, the federal system “will again be at, or over, capacity”. The practice of “double-bunking”, which was supposed to be a temporary measure, has now become accepted by prison officials and politicians as a permanent fixture.

Violence and safety in the prisons

The lack of proper prison facilities, the reduction of resources for programming and services, and the highly restricted living spaces are creating extremely unsafe conditions. This is increasing the level of inmate-on-inmate violence. It also serves to increase the likelihood of abuses by prison guards, as well as violence inflicted by inmates on prison guards and other prison workers.

Howard Sapers, the federal Correctional Investigator, tabled a parliamentary report in 2013 warning of looming prison riots. He drew a parallel to the 1971 Kingston Penitentiary riot where the prison was largely destroyed, two inmates were killed, and six guards were taken hostage but eventually released unharmed. Lack of work, recreational time, poor conditions of living, ineffective complaints processes, and lengthy cell confinement were the main grievances that gave rise to the Kingston riot.

Sapers highlighted that those same problems exist today. He explained that the problems of overcrowding, lack of support, and opportunities had taken Canadian prisons backwards to 40 years ago where prison riots were a common occurrence.

This criticism is also being raised by the Ontario Public Services Employees Union (OPSEU), which has organized many prison guards and other prison staff. OPSEU union locals in Thunder Bay have publicly condemned the situation in the prisons. They criticized the emptiness of the term “corrections”, while conditions are “inhuman”, where rehabilitation programs are non-existent, and where over-crowding creates violence and safety problems in the jails.

It is worth noting that it was precisely a dispute over the lack of safety in prisons which led to an illegal wildcat strike of prison guards in Edmonton, which rapidly spread across Alberta prisons, with even health and social workers in the prisons joining the walk-out. The defiance of these workers, who were prepared to break the law, shook Alison Redford’s Tory regime.

Prisons: a magnifying glass into class and racial inequality

In the parliamentary report, Sapers also gave scathing criticism to the claim of a “just society” by examining the demographics behind this record level prison population. He highlighted what he saw as a critical situation for black and aboriginal inmates in the federal system. He explained how the number of visible minority and aboriginal population in Canadian prisons had increased by 75% and 46%, respectively, during the last decade. In contrast, the number and proportion of Caucasian inmates declined.

Furthermore, minorities were over-represented in maximum security and segregation units, faced disproportionate charges during their prison sentences, and faced more “use of force” incidents.

Additionally, it was found that 80% of offenders suffered from addiction, nearly 50% required mental health care, and in the women prison population, approximately 80% had suffered from sexual abuse. The prisons are literally being packed with the most vulnerable and oppressed sections of Canadian society.

Many of the population groups (aboriginal, visible minorities, and the poor) and regions (such as southwestern Ontario) that are seeing skyrocketing imprisonment rates are those that face increasing unemployment, poverty, and lack of opportunity. These are the social and economic roots or origins of crime.

Those social problems are constantly worsening instead of being addressed. The destruction of the manufacturing sector and public sector austerity has resulted in the loss of good-paying jobs with benefits. These jobs are replaced by welfare cheques or with low-wage and part-time work. Cuts to social services, the skyrocketing cost of housing and rents, and the record-high cost of post-secondary education has the result of destroying the social safety net and the possibilities for economic advancement.

These problems have all been caused or antagonized by the ongoing crisis in capitalism. As more and more people fall through the ever-widening cracks in capitalist society, the tendency towards crime inevitably rises. Those in desperate and insecure situations will increasingly view crime as a practical or less-undesirable option to the miserable status quo of poverty. This is particularly apparent among working-class youth, who have far less opportunity then their parents had in the past.

Instead of addressing poverty and unemployment, all that capitalism offers is to sweep the problem under the rug. The same pro-capitalist politicians pushing forward layoffs and public service cuts, hypocritically offer increasing policing, expansion of prisons, and harsher sentencing as “solutions”.

The myth of rehabilitation

The Criminal Code and the entire rhetoric surrounding the criminal justice system emphasizes that the purpose of punitive measures is public safety, rehabilitation, and re-integration. The idea that increasing policing and punitive measures contributes to reducing crime is, however, incorrect.

Inmates finishing their prison terms return to a social context that is deteriorating, with even less economic opportunities than before while facing the stigma associated with conviction. How can one expect successful rehabilitation and re-integration into society in such a situation?

Furthermore, the degradation of prison life and the cutting of educational and work opportunities, as well as other services, reduce the possibility of returning to a healthy life. The increasing violence, abuse, and overcrowding in prisons encourage anti-social behaviour instead of rehabilitation.

Many commentators are correctly calling the prison system a “school of crime” for these reasons. This is particularly apparent in the youth criminal justice system, where re-offending rates continue to be extremely high. It is a sad lie that rehabilitation is a priority in our society.

In reality, the criminal “justice” system uses harsh sentences and even harsher prison conditions as a means to discipline working people into accepting the meagre wages and miserable opportunities under the status quo. Its purpose is not rehabilitative, as it claims to be; rather, it is punitive and coercive. Its real intention is to force working people to keep their heads down and to accept the crumbs that capitalism has to offer.

Even from this cynical standpoint these tough-on-crime policies are ineffective at reducing crime, as they serve to increase the oppression, alienation, and desperation of those at the bottom rungs of society.

The solution to crime is socialism

The only future for working-class communities and for youth under capitalism is poverty, unemployment, crime, and overcrowded prisons. A socialist society would reduce crime and the rate of imprisonment by addressing poverty and by providing decent employment for all. Rehabilitation, which today is an empty word, will be made a reality when the sources of desperation are addressed.

Socialist policies mean that instead of spending billions on prisons and on police budgets, these funds would be spent on education, healthcare, and recreational services. Instead of bailing out and giving corporate tax breaks to Bay Street, that money would be used to build quality public housing and fund childcare. Instead of allowing 86 individual Canadian oligarchs to control the same amount of wealth as 11.6-million Canadians, such assets would be seized in order to provide good jobs and pensions for all.

Socialist measures, by addressing the root causes, can also create the basis for a truly rehabilitative justice system. Punishment need no longer be the priority, as is necessary today to maintain the unjust capitalist status quo. Instead of coercion, counselling, education, and job opportunities would be prioritized. Where isolation from society becomes necessary, humane living conditions along with adequate support programs would be provided, such as mental health services.

It is the capitalist system of class inequality which is truly criminal for creating desperation and hopelessness. That aboriginal youth in Canada are more likely to go to prison than to graduate from high school exemplifies this brutal reality. It is this same system that endangers the safety of inmates, prison guards, and other prison workers due to overcrowding and deteriorating conditions in the prisons.

Instead of such barbarism and hypocritical lip-service to “rehabilitation”, let’s begin truly eradicating crime by using the enormous wealth of our society for the advancement of all.

Provide funding for a truly rehabilitative and humane justice system!