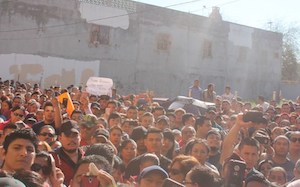 At an April membership meeting of Unifor Local 222, the union representing 21,000 GM workers in Canada, a motion was passed to send a letter of solidarity to Mexican workers engaged in mass strikes.

In the letter (pictured below), Local 222 President Colin James wrote to congratulate 45,000 workers in Matamoros, Mexico after they won a wage increase and bonus following a month-long strike. The main demands of the strike were for “20/32”: a 20 per cent wage increase and 32,000 peso bonus. Now the movement they led is spreading to other regions in Mexico. “The goal of corporations is to try to keep workers isolated and weak,” James says in his letter. “Our response must be to become more united so we are stronger.” 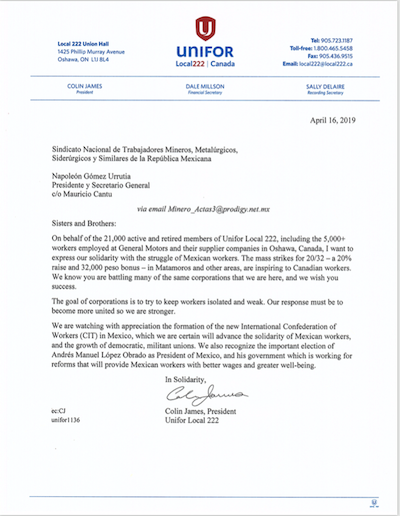 Fightback enthusiastically welcomes this development. In February, we wrote about how the “Boycott Mexico” campaign initiated by the Unifor national executive was misguided and argued that GM workers should take inspiration from the Matamoros strikes and factory occupations to save jobs in Oshawa. This letter demonstrates the potential of cross-border alliances of workers in Canada, the U.S. and Mexico in their struggle against GM’s factory closures and the race to the bottom in terms of wages.

What started in Matamoros in early January, when 45,000 workers in 48 manufacturing factories, including auto parts, electric, and metallurgical industries began a month-long strike, has led to waves of strikes in other sectors across Mexico. This includes more than 1,000 separate calls for “industrial action” since the beginning of 2019. Steven Lockart, chief executive of the manufacturing company TPI Composites, responded to the Matamoros victory by saying: “There is a risk that similar wage demands could be made by employees at most, if not all, businesses along the U.S. and Mexican border.” The bosses are clearly trembling after this enormous display of power by the working class. 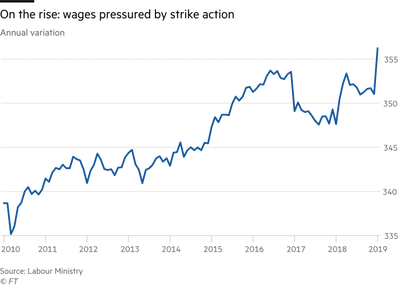 A sharp spike in strike activity in Mexico and the resultant rise in wages since the beginning of 2019. From the Financial Times, March 28, 2019: Mexico’s wages push leads to wave of strikes

The power of the working people resides in the fact that we create all the wealth in society. However, if the workers are disorganized and disunited, that power dissipates. By withholding our labour during strike action, workers become more conscious of our strength and learn who really makes things run. This must eventually lead to democratic control of our workplaces in order to run production on our own terms, not the terms of the bosses whose only interest is in churning out profits.

The crisis of capitalism is now pushing workers to their limits and new battles are on the way. The successful, militant strike in Matamoros and the ongoing strike waves across Mexico provide an inspiring example, marking the beginning of a new period for the class struggle in Mexico after 30 years of utter exploitation and poverty wages. What better time to take the example of these workers and put it in practice here in Canada: to spread the movement of strikes and factory occupations from Matamoros to GM Oshawa. That is, unity not only in words, but in action.

(More on the victory of the Matamoros workers can be read about in an article written by Fightback’s sister group, Socialist Revolution, in the U.S., entitled: How Mexican Workers Fought Back and Won.)