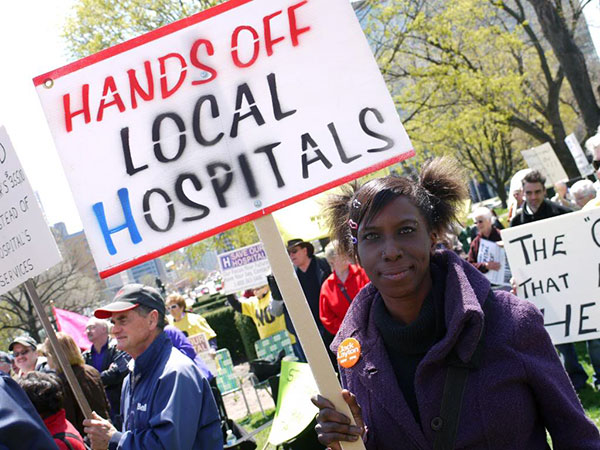 One of the most important reforms won by Canadian workers, public medicare, is coming under relentless attack by government austerity programs.  Recent provincial budget decisions in Ontario, for example, have cut $3-billion from health spending, which is putting the health of Canadians at extreme risk — especially those from the most marginalized sectors of society.  For the sake of our own health, we need to put a halt to the austerity agenda.

The Ontario government’s cuts to health care are wide-ranging, affecting everything from annual health checkups, to surgeries, to therapy, to hospital beds.  The government has masked these austerity measure as “transformations” rather than cuts.

Despite this attempt at re-branding, Natalie Mehra, the director of the Ontario Health Coalition, has called the Ontario Liberals’ actions as “now exceed[ing] the previous extreme cuts to, and privatization of, clinical services” that occurred during the notorious Mike Harris years.

It is not hard to see the result of these “transformations” and their effect on ordinary people.  One of the hospitals targeted by the government’s cuts includes the Rouge Valley Hospital, which as of the beginning of April stopped offering cataract surgeries. This translates into 1,000 less spots available to patients every year.  Rouge Valley citizens will now have to travel far distances in order to receive this type of care, particularly those who are the most oppressed in society and who may not have reliable private transportation.  All three campuses of the Ottawa City Hospital have also undergone extreme cuts: 290 staff members, including doctors and nurses, have been laid off; their endoscopy unit is to be closed; 1,600 cataract surgeries will be eliminated; and thousands of surgeries that were offered by the hospital are now being handed over to private clinics.

According to a formal complaint filed by the Ontario Health Coalition (OHC) and the Ontario Pubic Service Employees Union (OPSEU), these private clinics are not only more costly but fail to meet the same standards that public health facilities enforce.  Due to their profit-driven nature, they exploit people’s health concerns in order to over-charge and prescribe “unnecessary procedures”. To make matters worse, in order to advance their profit margins, it has been discovered that many cut back on necessary sanitation protocols.  In 2011, 6,000 patients of a private Ottawa clinic were warned by Ottawa Public Health officials that they may have contracted HIV or hepatitis through “gross cross-contamination” due to the clinic’s failure to use sterile equipment.

All these recent health reforms are described as “a strong plan that makes the right choices”, however there is still a lot of uncertainly as to whether the access to, and quality of, healthcare services will remain the same.  Under the Local Health Integration Networks Act (2006), a neutral body of health organizations — which collectively form an LHIN — is responsible for approving the government’s healthcare reforms.  However, these responsibilities seem to have been abrogated according to the formal complaint filed by OPSEU and OHC.  In spite of the Act’s provisions, the public was not provided with notice about the reduction of services at the three campuses of the Ottawa Hospital.  The public was also not informed, by the LHIN, that they could oppose the latter’s approval of the Ottawa Hospital service reductions.  This is a lack of transparency and complete dismissal of people’s guaranteed democratic rights.  The push for austerity by the government is literally jeopardizing the health of ordinary Canadians.

The effects of these austerity measures are most pronounced on minority and marginalized groups such as women, aboriginal people, students, and working-class families. Up until December 31, 2012, every doctor and medical publication on the topic advised an annual papanicolaou smear (pap test) for anyone who is at risk of cervical cancer.  Beginning on 1st January of this year, Ontario’s Cervical Cancer Screening guidelines were revised to only recommend a pap test every three years.  Despite the fact that individuals can contract the HPV virus — which can lead to cervical cancer — at any time, a patient wishing to properly prevent this unpleasant and life-threatening medical condition will have to pay out of pocket for more frequent checkups. Some sex workers (i.e. erotic massage attendants) also require this test for their annual licence renewal, as well as to keep their health in check as part of engaging in sexual labour. These health cuts are putting a dollar value on people’s health, and essentially their lives.

Living in the 21st century, we pride ourselves on the scientific and technological advancements made possible through research and innovation. However, knowledge is restricted in some circumstances due to economic downturns caused by capitalism. The recent health reforms have also limited funding for research. The Native Women’s Association of Canada, Prairie Women’s Health Centre of Excellence, le Réseau québecois d’action pour la santé des femmes, and the Assisted Human Reproduction Canada have all had their research funding cut. Medical schools have also experienced cuts to funding which not only limits student grants (which further limits the ability of working-class students to be able to afford an education in medicine), but also restricts research potential.

Access to free quality health care in this country is one of the most cherished social programs for people, and often held as a defining difference with the United States.  However, this vital reform, which was fought hard for by the workers’ movement in the postwar period, is under incredible danger by capitalist governments across Canada.  Medicare, along with every other social gain, will be sacrificed so that the financial crisis can be paid for.  We need to mobilize and organize against capitalist austerity, in order to protect our health and our lives.