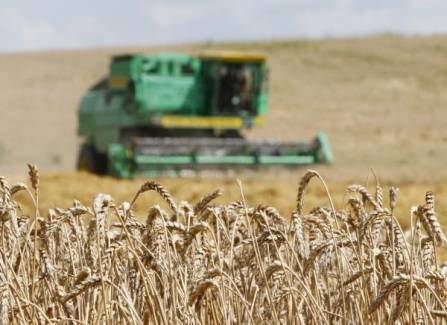 The federal Conservative government has announced that it will dismantle the Canadian Wheat Board.  This is an attack on the viability of family farming in Canada and will only benefit the large multi-national agro-corporations. By extension, it is also an attack on all who work for a living: the youth, workers, and even small business owners. We must save the Wheat Board from this attack.

The Canadian Wheat Board buys almost all wheat, barley, and durum produced by farmers in the Prairie provinces, along with some product from British Columbia farmers.  By being the single buyer for much of Canadian grain, it is able to exert a certain degree of power over world grain prices and helps to secure higher prices for small farmers than if they individually sold grain on the market.  By being a single-buyer, the Wheat Board is also able to co-ordinate and lessen the costs of transportation and distribution for grain farmers.  In essence, the Canadian Wheat Board has given greater security for small grain farmers over the fluctuations and instability of the world capitalist market.  For this, the Wheat Board has incurred the wrath of the large agro-bosses and their representatives in government.

A brief history of the formation of the Wheat Board

The origins of the Wheat Board go back to the 1920s and the movement of voluntary farmers’ cooperatives. Farmers formed these cooperatives to protect themselves against drops in market prices. However, farmers were not enthusiastic about being part of the cooperatives when prices were high; in these instances, the cooperatives would go into deficit and not have enough to provide for farmers. In time, with rise of the workers’ movement following the Great Depression, cooperatives were able to win subsidies from the government in 1935. However, because participation in the cooperatives was still voluntary, the bigger farmers maintained their advantage over the smaller ones by remaining outside the cooperatives.

The workers’ movement became further radicalized at the end of the Second World War.  With the upward turn in the world economy, the governments of the advanced capitalist countries were able to afford concessions and reforms to the growing workers’ movement.  In 1944, the federal government created the Canadian Wheat Board, a single-desk system, which meant that all Prairie grain farmers had to market their product through it.  It also created greater price guarantees for farmers, giving them the security and viability they so desperately sought in the previous several decades marred by major wars and depressions.

The creation of the Wheat Board was a great improvement to small farmers’ lives, but they have continued to be attacked from all sides by the general capitalist system.  Increased input costs, tighter control by the banks, and increased competition by factory farms and large agro-corporations have seen the number of family farms in Canada dwindle over the past half-century.  In analyzing these trends, Statistics Canada commented, “With increasing production costs and generally decreasing commodity prices, successful farming increasingly requires a niche market or a large operation with significant capital investments to remain viable. Indicators of this are the decreasing farm numbers and the increasing number of farms reporting large areas or gross farm receipts of a million dollars or more.”

The Wheat Board was designed to protect small famers from the volatility of the market. But as corporate multinationals have grown over the years at the expense of small farmers, they have an advantage that is disproportionate to their size.  In many cases, as has been infamously proven with agro-giant Monsanto, these corporations can manipulate and control the costs of seeds, pesticides, etc.  There has been a trend towards monopolization at the consumption end, too, as supermarket giants refuse to grant a market to farmers if they do not reduce their prices.  It is much easier to purchase produce and food imported from half-a-world away than it is to purchase locally-produced food.

There is also the pernicious role of the banks that continues to threaten small farmers.  The market continuously demands farmers adopt technological upgrades, whether it is in new machinery, new pesticides, or new seed. It is a major burden for farmers; most are forced to take on onerous loans — and all of the risks that come with them.  Small farmers often find themselves at a disadvantage to the large corporations that produce these technologies. These agro-firms lock-in their innovations through intellectual property rights and use them to hound small farmers for profit instead of sharing them for the public good. Based on this system, the farmer is ambushed from all corners — prices, interest rates, and technology. With the growing pressures on small farmers, it is becoming ever harder for farms to repay the banks.  If the farmer is unable to pay the bank back, they will usually end up losing their entire farm.

Every year, more small farmers are run out of business.  Between 2001 and 2006, the number of farms valued at over $250,000 increased by 13.8%; meanwhile, the number of farms valued at under $250,000 fell by 10.5%, with most of those losses occurring on the Prairies and acreage remaining static.  Although large factory farms only make up 17% of all farms in Canada, they account for 74.9% of total income.

As large farms have gained a much bigger influence in agricultural production, their financial weight is what counts in Parliament.  With the federal Conservative majority, the agro-corporations are licking their chops at the prospect of the elimination of the Wheat Board.  Despite over 61% of farmers voting to keep the Canadian Wheat Board, the Tories are intent on ramming legislation ahead to end the Wheat Board on 1 August 2012.

How capitalism is starving us

There is little free about the free-market system; it lies at the whim of the large corporations and banks.  Capitalism is unable to provide a sustainable food production system, neither in Canada nor anywhere else around the world.  It is unable to provide enough for either farmers or consumers.

As farmers continue to be squeezed at the farm, consumers are increasingly being squeezed at the grocery store. According to Food Banks Canada’s 2011 HungerCounter, over 851,000 Canadians are using food banks every month, a 26% increase from 2008.  A study out of the US revealed that the average person would need to spend an extra $500 per year if they were to eat the proper amount of fresh fruits and vegetables. Millions of people worldwide starve to death.  Meanwhile, food is regularly destroyed around the world in order to manipulate world food prices.

Nationalize the banks and the agro-corporations!

Loans are one of the biggest burdens and obstacles to small producers, be they farms or other operations.  Access to cheap loans will allow small farmers to make their production more efficient and allow them to thrive. The nationalization of the banks will allow small farmers access to low-interest rates to either make their current loans more affordable, or make it easier to expand and modernize operations.

We need to nationalize, under democratic workers’ control, all of the large agro-businesses that exploit both farmers and consumers — the large seed and fertilizer corporations, the transportation industry, the large supermarkets, and the factory farms.
Only in this way can we guarantee a livable wage for farmers, and food at an affordable price for working-class people and the poor. It is also the only way we can ensure sustainable production and productive development of the agricultural system.

For example, the large corporate farms, through nationalization, can be entered into a system of socialized production. This can be placed under the control of its workers. Small farmers would voluntarily be able to enter this system if its viability is demonstrated in practice.  Aging farmers would also benefit as they could continue to farm, but be aided in physically demanding chores, for instance.

The nationalization of the biochemical corporations would allow farmers to gain access to cheap chemicals, seeds, and machinery, reducing one of the greatest expenses for farmers.  Furthermore, any developments in biotechnology could be put into the benefits of producing more plentiful and more healthy crops, and not just into what can be patented and owned by a corporation.

A socialist system of agriculture would be designed to benefit the majority of the population.  Only a socialist system will be able to ensure an adequate level of living for ordinary farmers, while providing affordable nutritious food for consumers.  For decades, the current system of “free-market” food production has increasingly hurt everyone.  Small farmers have now been eroded to a minority of food production income, while high food prices are impoverishing (both financially and nutritionally) working-class people and the poor.  The Tories’ attack on the Wheat Board will only continue this trend.

The Great Recession and the capitalist austerity have laid bare all of the inadequacies of the so-called “free-market”.  More than ever, we need to have youth, workers, farmers, and small-businesspeople to unite to fight for a socialist system of production.  The defence of the Canadian Wheat Board can be a first step in that struggle.