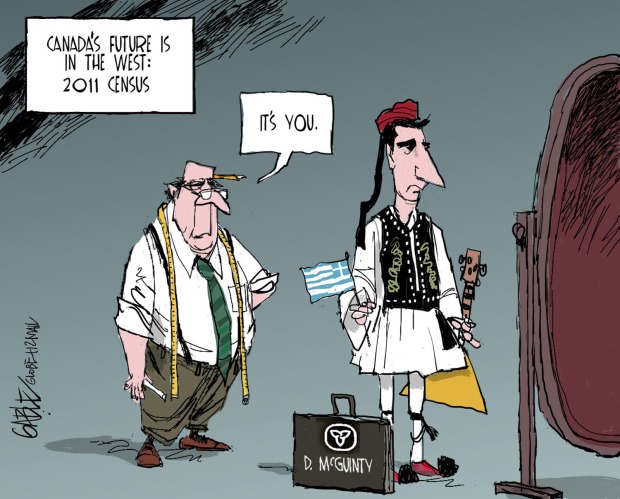 “Doctor” Drummond has issued his prescription for Ontario’s economy.  The patient is deeply sick and will not recover his vitality without a prolonged period of painful and debilitating treatment.  Drummond’s bloodletting shows that not even the capitalists have any faith in the viability of their system moving forward.  Workers and their organizations need to come to the realization that, under capitalism, good times are not ahead and this austerity is the only possible future unless we do away with the present system.

No other province has been harder hit by the capitalist crisis as Ontario.  Once the economic engine for Canada, Ontario’s economy has been battered, even before the so-called “Great Recession” struck in 2008.  The heart of Ontario’s economy was manufacturing, but over half of the sector has disappeared since 2003.  Ontario has even been christened as an “honourable member” of the US Rust Belt.  Ontario’s unemployment rate continues to be well over the Canadian national average, a historical first; in many cities in the manufacturing belt, such as Windsor, the unemployment rate has risen to double digits.  The province has even been downgraded to a “have-not” status within Confederation, now receiving equalization payments from the federal government.

As we wrote back in October in our analysis of the last provincial election, the ruling class was very dissatisfied with the results, namely that neither the Liberals (who ended up winning a minority government) nor the Conservatives appeared prepared to enact the tough measures they feel are necessary to restore the financial balance in the province.  The right-wing Toronto Sun even failed to endorse anyone in the election for the first time in its history.

Following Dalton McGuinty’s victory, the new government was put on notice by bankers around the world.  As they had done with Greece, Spain, France, and the USA, Moody’s threatened to downgrade Ontario’s credit rating if the province didn’t start to seriously attack the $15-billion deficit and to implement austerity measures.  Partially as a response to the threat, McGuinty commissioned Don Drummond, the former chief economist of TD Bank, to look at how the government could eliminate the provincial deficit by 2018. The irony that a government crying poor would pay Drummond $1,500 per day to find ways of cutting costs was not lost to most.

The report emphasizes the need for cuts, but is vague on where the cuts should come from.  Many times, Drummond emphasizes that there should be no sacred cows and that everything, including health care, should be on the table.

Among the most notable cuts, Drummond is pushing to cap the increase in healthcare spending to 2.5%, less than half of what it is now.  Although Drummond does not recommend privatization of Ontario’s medical system, he does propose “streamlining” it, including amalgamation of services.  This could potentially have a catastrophic effect on healthcare in rural and isolated portions of the province.  Moreover, Drummond’s commission wants to put pressure on doctors and nurses to accept “reasonable” wage freezes as it feels that they are too highly paid in comparison to their counterparts in other provinces.

The squeeze would also be put on all other public sector workers.  The wage freeze for public employees would be continued indefinitely, and any future raises would have to come from savings resulting from “increased efficiency” by workers.  Drummond has also proposed overall spending cuts of at least 2.5% per year for every government department outside of health and education.  The Ontario Public Service Employees’ Union (OPSEU) suggests that this could lead to tens of thousands of public sector workers being sacked.

Drummond also recommends scrapping full-day kindergarten (the only recommendation  that the Liberal government has promised to rule-out so far).  Furthermore, the size of classrooms in primary school would once again increase.

The Ontario Drug Benefit program, which provides free prescription medication to seniors, would be scaled back; only the poorest of seniors would now qualify for the program.

Drummond also recommends that wherever possible, the government should look into privatizing public services, except for the four public giants — the Liquor Control Board of Ontario (LCBO), Ontario Lotteries and Gaming (OLG), Hydro One, and Ontario Power Generation (OPG).  The provincial government has already begun to implement this recommendation, promising to immediately sell off over 400 Service Ontario centres across the province.

This is just a small taste of the over 400 recommendations coming out of the Drummond commission.

The cuts will be devastating; it has largely been public spending that has kept the situation from being much worse for the majority of Ontario workers.  But, it is not the cuts themselves that are notable — it is Don Drummond’s pessimism about capitalism’s ability to recover from the current crisis.

Drummond’s insistence on cuts is interesting because they are not meant to be a short-term thing.  Indeed, Drummond emphasizes the fact that the austerity he is recommending is not a temporary belt-buckling but a fundamental shift for what workers should expect from government.  According to him, the current downturn of the Ontario economy is not a short-lived recession like that of the early 1980s or 1990s — indeed, Ontario should not expect to see growth rates higher than two per cent for the foreseeable future!  Therefore, Drummond is warning Ontarians that the austerity will not be lifted after an economic boom.  In a column penned for the Globe and Mail, Drummond explained:

“This reality frames the fiscal problem. The province can’t simply adjust its fiscal parameters for a few years to eliminate a deficit caused by the recession and associated stimulus. Even with the restraint measures already taken, the provincial deficit would continue to rise in an environment of modest economic growth. The fiscal response must not only be strong and sustained, it must reform the way the government delivers virtually every service.”

Drummond sounds the warning alarm that if government spending continues at the present rate, the province’s deficit will rise to $30-billion by 2018.

Contrary to what all three parties were saying in the last provincial election, governments can no longer expect a booming economy to return to eliminate debts or deficits:

“Governments got out of similar fiscal holes in the 1990s, notably the federal government and provinces such as Alberta, Saskatchewan and Ontario itself. But they had strong economic growth to lend a helping hand; that, and a period of spending restraint brought them back to balance in relatively short order. Ontario even managed this feat while cutting taxes….

So we have to keep in mind two things. First, economic growth will not be a huge help this time around, either in the next few years or further down the road. Everything must be done to bolster the economy, but we can’t count on the type of growth to which Ontario has been so accustomed. Second, the government must focus on reforming programs, not on simple (even simple-minded) cost cutting.”

In many respects, to hear this type of honesty from one of Canada’s top bankers is astonishing.  We fully agree with Mr. Drummond’s pessimism about capitalism’s future.  Unfortunately, the leaders of the workers’ movements have yet to awaken to this new reality and are desperately trying to pretend the situation isn’t this bleak.

In an interview with CBC Radio, Ontario NDP leader Andrea Horwath criticized the draconian cuts suggested in the Drummond Report, but criticized them as unnecessary because Drummond was too negative on the future of the economy.  Similar critiques have been levelled because no one wants to believe that the future, under capitalism, could be so grim.  Jim Stanford, an economist with the Canadian Centre for Policy Alternatives and the Canadian Autoworkers (CAW), wrote, “Ontario is not remotely Greece. A good way to make us more like Greece would be to throw tens of thousands of broader public sector workers out of their jobs in a misguided effort to dig our way out of a hole.”

Stanford is correct that Drummond’s cuts would exacerbate the slump. However, the sorry fact is that Ontario is much closer to Greece, Italy, and Spain, than the politicians and reformists would like to admit.  In the space of two years, Ontario’s debt-to-GDP ratio has risen from 37% to 50%.  However, when one factors in Ontario’s share of the federal debt, as well as debt carried at the municipal level, it is expected that Ontario’s ratio will be near 100% by 2018.  As Drummond notes, Ontario’s current financial health is similar to that of Spain in 2007.  And we only need to look at where Spain is now.

The fact is that capitalism’s progressive epoch is far behind us; the worldwide crisis of overproduction means that to restore financial equilibrium to the system will necessitate massive austerity, wage cuts, and job losses.  The measures being implemented by the Greek and Italian governments will need to be imposed in North America, too, sooner or later.  The Drummond Report was Bay Street’s demand that the Ontario government finally take the austerity pill that capitalism demands. The irony is that the only people who have faith in the continued health of capitalism are the reformist leaders!

This does not mean that austerity is pre-determined and that the working class has no other option.  From Egypt to Greece to the anti-Rob Ford fight in Toronto, the right-wing austerity agenda is being resisted fiercely by the working class.  The only limit to our ability to beat back the bosses’ agenda has been the timidity of the leaders of the working-class organizations (as can be evidenced by the capitulation of the leadership of CUPE 416 in Toronto).  Workers and youth are prepared to fight for a better future.

In the upcoming Ontario budget debate, it is absolutely vital that the NDP oppose all of the cuts coming out of the Drummond Report.  Horwath and the NDP leadership can have no part in making any deals or concessions with the minority Liberals, becoming responsible for the austerity that will further attack workers’ living standards.

To Mr. Drummond, we only need to say this — yes, you are correct that capitalism is broken and only extreme measures will work now.  But, we are not prepared to accept the austerity you propose and which will only return us to 19th-century working conditions.  If the system is broken, let us build a new one.  Let us move forward to building socialism.