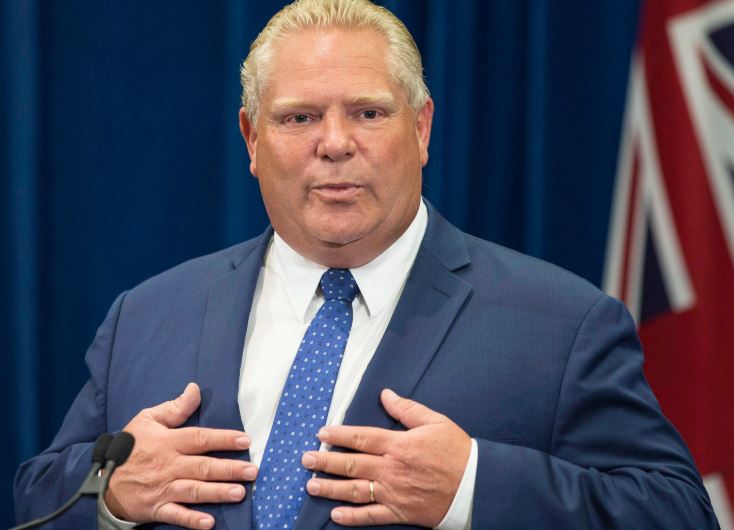 Premier Doug Ford has announced that he will go ahead with his plan to slash the Toronto City Council from 47 members to 25, defying the recent court ruling which declared his move unconstitutional by invoking the “notwithstanding” clause in the Canadian Charter of Rights and Freedoms. Ford’s move marks the first time in Ontario’s history that this clause has been used. While it should come as a surprise to no one that Doug Ford has little respect for democratic rights or procedural niceties, the degree to which he is willing to tear up the Charter for petty, personal vendettas against his former colleagues at city council is almost stunning. This gives us a clear glimpse into what we can expect from Ford’s attacks on the working class in the coming years: ruthless slash and burn, while running roughshod over democratic rights.

The current saga began when Ford put forward Bill 5, the “Better Local Government Act,” which would cut the Toronto city council in half. The size of city council was set to increase from 44 to 47 wards in the upcoming municipal election. The planned expansion followed a four-year consultation that was designed to rebalance the city council as downtown residents had become underrepresented. Over the years, downtown wards had grown significantly larger due to population growth, leaving downtown Toronto underrepresented relative to the suburbs. The new 47-ward electoral map was meant to rectify this.

Ford’s plan to have Toronto’s wards based on the city’s 25 provincial ridings was intended to bring back the underrepresentation of the downtown. As former councillor Ford is well aware, downtown ridings tend to be more left-wing, making this proposal a shameless attempt to rig the Toronto municipal elections in favor of right-wing city councillors. As Giorgio Mammoliti, a Ford ally on the city council, admitted openly: “There is going to be less left-leaning politicians in the City of Toronto. That means this is a great thing.” Mammoliti is the same far-right city councillor who referred to people living in public housing as “cockroaches”, so it is clear that this attempt to gerrymander Toronto City Council will further enable racist politicians in their attacks on the working class and the poor.

Justice Edward Belobaba ruled that Bill 5 was unconstitutional, violating Charter rights to freedom of expression and association, both of the candidates and of Toronto voters. He also ruled that the legislation in question violated the constitutional principles of the rule of law and democracy. The ruling emphasized the fact that this legislation was put forward in the middle of Toronto municipal elections and therefore “Bill 5 substantially interfered with the candidate’s ability to effectively communicate his or her political message to the relevant voters. This is not a situation where a provincial law changing the number and size of the City’s electoral districts was enacted say six months before the start of the City’s election period. Had this happened, the law would not have interfered with any candidate’s freedom of expression and no candidate could have alleged otherwise.” Here we can already see the limits of bourgeois legality in protecting democratic rights. It was not a violation of the Charter to gerrymander Toronto’s wards in order to favor right-wing candidates and disenfranchise left-wing voters; it is only unconstitutional because it was done at the last minute and in such a haphazard way as to throw the election into chaos.

Any possibility of relying on the judiciary to defend against Ford’s attacks was made patently absurd shortly after the ruling, when Ford announced he would be invoking the “notwithstanding” clause in the Charter of Freedoms in order to pass Bill 5 despite the violation of constitutional rights. The notwithstanding clause allows provincial or federal governments to pass legislation “notwithstanding” violations of Charter rights, giving them the power to overturn court rulings by effectively suspending sections of the Charter. It contains a five-year sunset clause, but otherwise allows governments to flout many of the most basic democratic rights with a simple majority. This clause is rarely used, especially outside of Quebec, and has never been used before in Ontario. It has often been used for reactionary purposes. It has been used to pass back-to-work legislation in Saskatchewan that was found to violate the Charter-protected right to strike, and to pass legislation against gay marriage in Alberta—although the latter was overruled by the Supreme Court on jurisdictional grounds. When a left-wing government is in power, it is often claimed that this or that reform cannot be put through because of any number of technicalities, or checks and balances. But as soon as a right-wing government is in power, all of these technicalities and checks on power are suddenly powerless to prevent attacks on the working class. For instance, the NDP correctly campaigned to bring Hydro One back into public ownership, but insisted on buying it back, rather than simply taking back control “notwithstanding” the “property rights” of the Bay Street capitalists profiteering off public infrastructure.

We cannot have any faith in the courts to beat back Doug Ford’s attacks, nor can we have any faith in Mayor John Tory, himself the former provincial leader of the Conservative Party. To beat back this attack on Toronto’s democracy will require mass mobilizations. Andrea Horwath, leader of the Ontario NDP, blasted Doug Ford saying “Doug Ford is not the king of this province. Ontario is not a dictatorship.” It will take much more than critical statements, however, to beat back an attack like this. We need to build a movement capable of challenging Doug Ford in the streets.

There is an immense amount of anger in Toronto at such egregious attacks on our democracy. Torontonians are a month and a half away from an election, at the height of campaign season, and are unsure of which district they will end up in. Even candidates are left up in the air as to in what ward they will be running for election. Yet this anger is as of yet mostly unharnessed. The fight against Ford’s attack on Toronto’s democracy cannot simply be opposed because it has caused chaos for the candidates; masses of workers are not going to be mobilized into struggle if the fight is only against a technicality. Many councillors are widely, and correctly, viewed as careerists, so there won’t be mass support if the issue remains focused on how unfair this is to their careers. Bill 5 is designed so that right-wingers like Mammoliti will have more influence at city council, and passing it in the middle of an election undermines the political influence of working class organizations whose mobilization efforts are thrown into shambles. It is an attack on the working class and the poor, and must be opposed on that basis.

The ONDP, the labour movement, and left-wing candidates must begin mass mobilizations to stop this legislation. Queen’s Park is, after all, in Toronto. Sufficient mobilizations would be capable of preventing the legislature from being recalled. For example, the mass movement and occupation of the legislature in Madison, Wisconsin prevented the legislature from functioning for months. Similar mobilization here in Toronto could effectively derail Doug Ford’s attacks on Toronto’s democracy, and begin a generalized struggle against his wider agenda of reactionary austerity.