Doug Ford – What he is and how to fight him 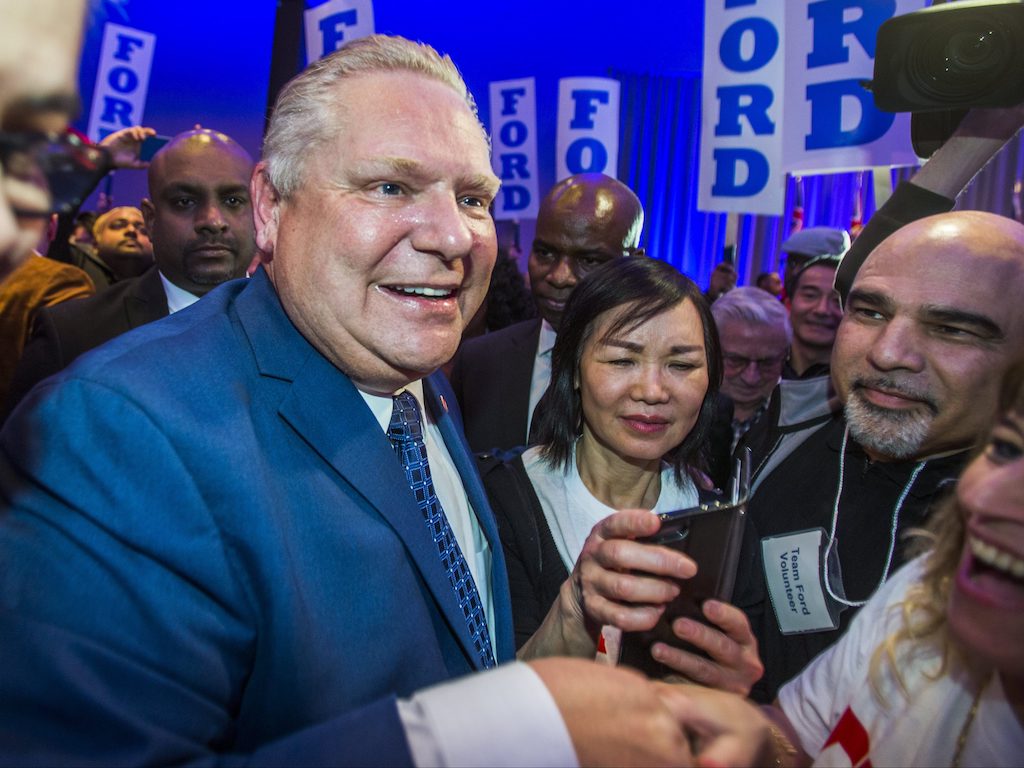 Late in the evening of Saturday March 10th, Doug Ford was declared victor of the Ontario Progressive Conservative leadership race. In a complicated weighted ranked ballot system, Ford garnered just over 50 per cent of the points, narrowly surpassing establishment candidate Christine Elliott, who actually won the support of more members. Almost immediately, the results were challenged by Elliott’s campaign, delaying the announcement by over three hours. A recount was held at Elliott’s request, but the results remained the same. The PC establishment is no doubt in a state of denial. Many have drawn comparisons with the surprise election of Trump as the Republican Party candidate. Their party will now be led by a demagogue who has openly derided the party tops as “elites,” and who gained almost no support from them during the campaign. All things being equal, it is possible that Ford will be elected Premier in the upcoming June election. Only one thing is certain: a dramatic realignment of Ontario politics is about to take place.

The PC leadership race was triggered by the resignation of former leader Patrick Brown in late January. This came after allegations of sexual misconduct were levelled against Brown by two young women. Brown vowed to stay on as leader, but was quickly abandoned by his own party caucus and forced to resign the following morning. It is well known that Brown, who had taken the Ontario PCs to the left as leader, was reviled by the party’s more reactionary layers. They no doubt rejoiced at being given the opportunity to remove him from power.

After this, the leadership of the party was assumed by PC veteran Vic Fedeli. The interim leader admitted that “rot” had festered in the Ontario PC party under Brown’s leadership, citing not only the allegations against Brown, but also rigged nominations, overstated membership figures and the corruption of party officials. Fedeli vowed he would “make the trains run on time,” even if that included holding off on a leadership race before the June election. Most of the party establishment agreed with him.

The establishment feared a takeover by Trump imitators who were hostile to the PC old boys club and would take advantage of the crisis in the party. Their fears were confirmed when Doug Ford announced his candidacy, which he declared even before the leadership race had been announced.

Ford, a millionaire and brother of late Toronto Mayor Rob Ford, was no doubt hoping to replicate the achievements of Donald Trump south of the border. Ford believed he could capitalize on working class anger in Ontario and disillusionment with establishment politics – including that in his own party. He launched his campaign in his mother’s basement, likely as an attempt to court working class voters. While his focus was on defeating Kathleen Wynne, he also took aim at the Ontario PC establishment. At his campaign launch, he said,

“I can’t watch the party I love fall into the hands of the elites. The elites have shut the door on the grassroots, the foundation of our party… The elites of this party, the ones who have shut out the grassroots, do not want me in this race. But I’m here to give a voice… to give a voice to the hardworking taxpayers of this province, people who have been ignored for far too long.”

Despite their attempts, the Ontario PC establishment were unable to prevent a leadership race from taking place, nor were they able to prevent the renegade Ford from running. Ford was soon joined in the race by Caroline Mulroney, a former investment banker and daughter of former Prime Minister Brian Mulroney, as well as Christine Elliott, a PC veteran and member of the party establishment.

Slick Bay Street professionalism found little support in the race. Instead, Ford’s path to victory was assured by his appeals to many of the ugliest, most reactionary elements within the party.

Ford’s open opposition to Ontario’s sex ed program and support for restricting abortion rights may have been met with guffaws from the media and establishment figures in the party, ready to push the Liberals from power through moderation. However, it only emboldened Ford’s support base. The National Post, for example, carried video of Ford receiving the endorsement of Prayer Palace, a Toronto mega-church. There, Ford was anointed by Charles McVety and another pastor, both eager to see him eviscerate protections for transgender children and abortion rights. The same pastor, Paul Melnichuk, was previously caught on tape in describing, “the old crooked Jew, as soon as he sees you he’s wondering how much money he can make on you, and how he can gyp you.”

“As the anointing ceremony ended, the giant screen filled with the words FordforLeader.com, the website where the former city councillor had earlier urged the congregation to sign up as Tory members. ‘Go online … register, register your family and friends, because that’s the only way we can make a change in this province,’ Ford told them. ‘And we will make sure — I can guarantee you we’ll make sure — the church has a voice. All the time.’ The event four weeks ago underlined Ford’s determined outreach to social conservatives.”

Here, we see the polarization of politics creeping up to Canada, and it may very well foreshadow further polarization to come. Kelly McParland wrote for the Post, “Ontarians may be angered enough at Liberal excesses to give the Tories a chance, Ford or no Ford. They’ve appeared to pay little heed to the tumult in the PC ranks to date. Rural Ontario offers a solid base of support. Toronto, usually the backbone of Liberal success, is home to Ford Nation.” That worries the ruling class, in the same way Donald Trump did and does worry them, and as Rob Ford did as Toronto’s mayor.

Karl Bélanger, president of the Douglas-Coldwell Foundation, told CBC News “If Ford is elected premier, Ontario will enter a state of flux…‘You will enter an era of unpredictability,’ he said, comparing it to the election of both Trump and the late Rob Ford,” and that “could begin to swell in other parts of Canada.” It could threaten the Liberals next federal election as well, CBC said, “If Ford is elected the next premier of Ontario, he could cause headaches for the federal government, given his opposition to a carbon tax, his unpredictability and his capacity to influence Toronto ridings in next year’s federal election.”

In the PC leadership race, bland middle-of-the-road politics, chiefly those offered by Elliott and Mulroney, crashed and burned. The shift to a more aggressive right-wing politics which, in word if not in action, targets the “elites” won the day.

If not defeated, this right-wing trend poses serious risks to the working class. Asked in one debate how he would govern, Ford pointed to his brother’s decision to privatize garbage disposal in Toronto’s west end as the sort of model he’s looking to expand. He said, “we will leave no stone unturned.” When asked, in a follow up question, to specify what else he would like to privatize, Ford listed the Ministry of Energy and doubled down on his proposal to slash taxes for the wealthy.

Ford’s reactionary agenda of cuts and privatization must be fought. But how?

Ford’s victory and the rejection of a party establishment preaching moderation and slick austerity reflects a rejection of the status quo by Ford’s base, much of it in Northern Ontario and in Toronto’s poorer suburbs. These are people who were attracted to anti-establishment politics after the “moderates” failed to represent them and their interests.

Though promising tax cuts, Ford was the only candidate, Maclean’s notes, promising to “somehow bolster public health care and housing.” In the TVO debate he attacked the “Bay Street” elites getting rich off Ontario’s “green energy” subsidies with a firmer tone than that adopted by any NDP leader in quite some time.

Ford’s right-wing anti-establishment politics cannot be defeated by the politics of the establishment. This is the lesson of the US election and the Toronto mayoral election that brought Doug’s little brother to power. Some union leaders have advocated a “strategic” vote for the Liberals. This approach is guaranteed to bring Ford to power. Uniting with the main establishment party will merely prove that Ford is the only anti-establishment candidate against the combined forces of the status quo. The labour movement must unequivalently reject the corrupt Wynne Liberals, who legislate striking unions back to work and are tied hand-and-foot to Bay Street. They are currently 3rd in the polls; they deserve to be there, and nobody should throw them a life-line.

The question remains whether Andrea Horwath’s NDP can offer an alternative to the Ford Conservatives. To do so Horwath needs to confront Ford’s right wing populism with an even more strident anti-establishment politics of the left. Clear working class politics like real free education, card-check union certification, real pharmacare that covers all drugs, universal childcare now, and a socialist rejection of the capitalist status quo.

Unfortunately the first signs from the Ontario NDP do not look good. Upon his victory, Horwath tweeted congratulations to Ford Nation, rather than facing up to the threat. This is the language of comfortable bureaucrats who will still enjoy their paycheque win or lose, without recognizing that this is a life or death question for working class people. The press release from the ONDP was not much better, talking about “hope,” the “middle class,” and platitudes about uniting Ontarians.

This is a clear mistake. The NDP needs to put clear water between it and the Bay Street Liberal politics voters are rejecting in droves. It needs to put forward a socialist platform that will dismantle the establishment and the status quo, to make a province that works for working-class people. In an increasingly polarized city, province and world, clinging to the middle is suicidal. The way to fight Ford is to organize on working class lines against austerity and provide a reason for people to support the left.

If Ford cannot be stopped at the ballot box he must be fought on the streets and in the workplaces. His victory is sure to set off a wave of privatizations and attacks on workers. It will likely be a repeat of the Mike Harris 1990s. Back then the labour movement responded with the “Metro Days of Action” city-wide general strikes and protests. Sadly that movement was betrayed by the union bureaucracy. This time must be different. We need a mass fight back movement against Ford’s attacks.

No support for the Bay Street Liberals!

Only anti-establishment politics of the left can defeat Ford’s right-wing populism!

Fight Ford at the ballot, on the streets, and in the workplace!