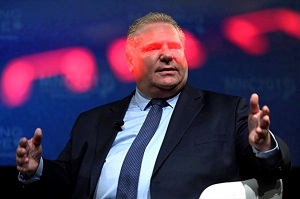 Bringing down the regime of Ontario Premier Doug Ford has quite literally become a matter of life and death for the people of Toronto.

On April 18, the Government of Ontario announced that it would be cutting $1 billion to Toronto Public Health over the next 10 years. The slash in funding is part of a larger shift that would see municipalities shouldering more of the burden of health-care costs. Funding for many Toronto Public Health programs, which currently receive 75 per cent of their funding from the province and 25 per cent from the City of Toronto, will now be split 50-50. Cost-sharing based on a 60-40 split will take place in Toronto effective immediately.

The announcement, which occurred late in the afternoon immediately before a long weekend, came as a shock to many city officials. Coun. Joe Cressy, chair of the Toronto Board of Health, minced no words in describing the impact of the cuts. “People will die,” he said. “People are going to die.” Cressy said the cuts would leave an instant $86 million hole in the board of health’s operating budget, which currently totals more than $250 million. He pointed to numerous programs that would suffer as a result of the funding cuts, including disease prevention, food safety, water quality, immunization programs, and sexual health promotion.

At a special meeting of the city’s board of health numerous public health advocates shared their concerns. Many invoked incidents such as the 2000 contamination of the water supply in Walkerton, Ont. with E. coli bacteria, which resulted in the death of seven people and hundreds of others becoming ill, or the 2003 SARS (severe acute respiratory syndrome) outbreak that killed dozens of people in Toronto. Joe Mihevc, former chair of the Toronto Board of Health during the SARS crisis, noted that the funding model before the outbreak had been a 50-50 split between the city and the province, but that the province had funded a larger share afterwards as a public health measure. Now reversion to the previous model threatens severe health consequences for Toronto once more.

In a manner befitting his status as a cowardly bully, Ford’s attacks threaten the most vulnerable, including the poor and young children. Maria Rizzo, chair of Toronto’s Catholic District School Board, warned that school nutrition programs might not survive the slash in provincial health care funding. Toronto Public Health currently provides $14 million to  fund breakfast, snack, and lunch options for at least 200,000 children that rely on the program for a morning meal. In a 2012 survey of the program, 82 per cent of students who responded said it kept them from feeling hungry, while 74 per cent said the program improved their well-being. The report noted that students who eat morning meals most days consistently reported better results in school. Combined with the Ford government’s attacks on public education and move to larger class sizes, these cuts portends a bleak future for many Toronto schoolchildren.

Ontario Health Minister Christine Elliott defended the changes with the blatant lies we have come to expect from this government. Via Twitter, she described Cressy as “fear mongering” with “misleading accusations”. Choosing her words carefully, Elliott made it clear that the government expects the City of Toronto to make up the difference in terms of slashed provincial funding: “Our government will continue to meet our financial commitments as we slowly shift the cost-sharing funding model over the next three years,” she wrote. “So long as the City of Toronto does the same, there will be no impact to local programs or on local patients.” [our emphasis] Elliott’s claim that there will be no impact to local programs has as much validity as Education Minister Lisa Thompson’s claim that “not one teacher will lose their job because of our class size strategy,” immediately before mass layoffs of teachers were announced.

Mayor John Tory called the cuts to Toronto Public Health “a targeted attack on the health of our entire city,” one hidden within the provincial budget and imposed without any consultation whatsoever. These criticisms are correct in and of themselves. However, Tory’s policies bear some responsibility for the vulnerable state in which Ford’s cuts leaves Toronto Public Health. Municipal budgets in recent years have seen net cutbacks for city social services, a stark contrast to the generous spending lavished on police and surveillance. These budget cuts stem partly from Tory’s refusal to increase property taxes above inflation for Toronto’s most affluent property owners. But they are also the result of chronic underfunding, going back to the Liberal government of Jean Chretien — which cut provincial and municipal funding in the mid-’90s — and the Conservative provincial government of Mike Harris, which offloaded programs onto municipalities in a manner similar to Doug Ford today.

Ford’s goal is to starve social programs to free up more money for his wealthy friends, who feed at the public trough through corporate subsidies, tax cuts for the rich, and moves towards privatization. Bourgeois politicians such as John Tory may publicly bemoan cuts to health care at the municipal level. But when push comes to shove, they will ensure any cuts are directed at the poor and working class, while the rich are protected. Workers cannot look to anyone other than themselves to fight austerity.

Yet there are already signs of an organized fightback to Ford’s attacks on health care. In October 2018, the Ontario Health Coalition, an alliance of more than 400 organizations that included unions and other community groups, organized a rally demanding expanded public health care services and opposing cuts. Thousands of people descended on Queen’s Park for the rally, including union members from the Canadian Union of Public Employees (CUPE), Ontario Public Sector Employees Union (OPESU), and the Ontario Secondary School Teachers’ Federation (OSSTF). This mass mobilization was sparked by a provincial review that anticipated cuts to health care. Now those cuts have arrived, and only a mass movement led by workers can stop them.

A rally to stop the privatization of health care has been organized by the Ontario Health Coalition and London Health Coalition to take place on April 30 at Queen’s Park, which is an excellent start. Workers through their unions must begin escalating actions building up to strike action with the aim to reverse the cuts and bring down the government. Cuts to health care are just the latest attack in the Ford regime’s war against working people in Ontario, and the most urgent yet. This is a government that cannot be reasoned or bargained with. It only understands force, and there is no force stronger than the organized working class. A general strike can bring down this wretched government and save lives. There is not a moment to lose.

Strike to bring down Ford!