Egypt: The masses rise against the army generals 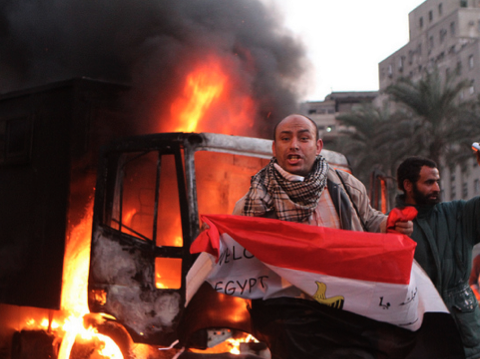 Events in Egypt are developing at lightning speed. Similarly to the last days of Mubarak in February this year, we see daily battles on the streets of Cairo and elsewhere. The Egyptian masses are determined to see the revolution carried through to the end. The clash between revolution and counter-revolution is provoking a crisis inside all political forces, as the rank and file instinctively move towards revolution and the leaderships vacillate and try to hold the masses back.

The latest protests, which are now entering their fifth day, are the largest and longest since the beginning of the revolution and the fall of Mubarak. According to Ahram online, the “million-man march” on Tuesday 22nd November succeeded in mobilising a million people in Tahrir Square, and 100,000 in Alexandria. In addition, there were protests of many thousands in Suez, Port Said, Gharbiya, Fayoum, Damietta, and Minya. Such numbers are all the more impressive given the brutality that protestors are facing from the state. The streets around Tahrir Square have become open battlegrounds, with police firing round upon round of tear gas and rubber-coated metal bullets at the crowds and protestors defending themselves with stones and Molotov cocktails.

The violence and brutality on display by the state forces – the armed bodies of men – cannot be overstated. Dozens have been killed and thousands injured. Reports indicate that the Central Security Forces are using a new potent type of tear gas that causes extreme suffocation and epileptic shocks. In Qena, the firing of tear gas into apartment blocks has left a nine-month old baby girl dead. Elsewhere, tear gas has been fired into hospitals and even mosques.

This brutality, instead of scaring protestors away and diminishing the crowds, has simply served to enrage the masses even further, leading to a swelling of the numbers on the streets. The revolutionary masses – primarily lead by the youth, who have been the most determined fighters since the beginning of the 25th January movement – have lost all fear. As is so often the case, the whip of counter-revolution has merely propelled the revolution further forwards.

As we reported previously (http://www.marxist.com/egypt-revolution-moving-into-a-new-phase.htm), these latest protests are directed against the military regime – the Supreme Council of Armed Forces (SCAF) – which filled the power vacuum left after the departure of Hosni Mubarak on 11th February, and which has refused to leave ever since, despite repeated calls and protestors on behalf of the masses.

The current protest, which began with a demonstration in Tahrir Square last Friday, was organised by an array of the different political groupings that put down their banners in order to unite against the electoral and constitutional process that the SCAF have put in place. The parliamentary elections scheduled for the 28th November are rightly considered to be a sham, with the SCAF suggesting that it remain as a super-constitutional body after the elections, and with presidential elections not scheduled (originally) until late 2012 or early 2013.

In response to the protests, Field Marshal Mohamed Hussein Tantawi, head of the SCAF, gave a public statement in which he announced the resignation of the Cabinet and the moving forward of presidential elections to June 2012 (at the latest). Such concessions, however, like the meagre reforms offered by Ben-Ali, Mubarak, and Gaddafi in their final days, are too little, too late for the revolutionary masses in Tahrir Square, who were quick to reject Tantawi’s offers. The crowds responded to the Field Marshal’s calls for protestors to disperse with defiant chants of “leave, leave; Tantawi must leave”.

Events are moving forward quickly; the confidence of the masses is growing and consciousness is rising; the SCAF is unable to keep up with the situation. The similarity to events in February earlier this year is clear, with the ruling elite, detached from the real situation and mood on the streets, trying to maintain power at all costs. Like the dying days of Hosni Mubarak, we see appeals from the SCAF for calm and order accompanied simultaneously by the deployment of state violence. Indeed, within two hours of Tantawi’s speech, security forces had already returned and the street battles had recommenced.

The Egyptian news website Al Masry Al Youm comments on the similarity between the February days and the current situation:

“Shortly after he finished his speech, thousands of protesters in Tahrir chanted slogans reminiscent of those used during the protests that brought down President Hosni Mubarak.

The growing similarities between these protests and unrest early this year are not limited to slogans. Political activist and analyst Samer Soliman compared Tantawi’s speech to the ones Mubarak made early in the revolution, saying it came too late and offered solutions that were no longer acceptable after the recent escalation.

‘It’s obvious that time has passed him by, and he doesn’t realize what’s happening around him, just like Mubarak’ Soliman said.

Activist Ahmed Maher, coordinator of 6 April Youth Movement, agreed with Zahran, saying, ‘the speech doesn’t respond to the demands raised by protesters in Tahrir and other governorates. The speech is the same as the speeches of Mubarak in his final days.’”

Both the tone and the content of Tantawi’s speech was similar to those of Mubarak’s, with conciliatory appeals to the crowds for order and calm. Tantawi’s speech suggested that he may have been living on another planet for the past ten months, with proclamations that the SCAF represented the will of the Egyptian people and was protecting the “national interest”, has never shot bullets at any Egyptian citizen, and has been patient with “attempts to smear the reputation” of the SCAF. It beggars belief to think that anyone is expected to buy such hypocritical nonsense that is spouted forth simultaneously alongside brutal state repression on the streets.

But neither violence nor concessions, similarly to the last days of Mubarak, will be enough to keep the SCAF in power. The military regime’s days are numbered, and it is increasingly looking like a case of not if the SCAF will choose to leave, but when it will be forced to leave.

There are further similarities between the beginning of the revolution and current events, with the defection of certain high-ranking state officials to the side of the protestors. Ahmed Shoman, a popular army captain who was amongst the first of the army officials to defect to the revolution in January, has once again joined the masses in Tahrir Square, condemning the SCAF for attempting to stay in power and telling reporters that the army “should never be above the people”. Shoman is seen to represent the more revolutionary elements within the army, and such a defection indicates the potential for greater splits in the state apparatus.

Alongside defections in the military, there are also divisions forming in the Muslim Brotherhood. Since the beginning of the revolution, the Muslim Brotherhood has kept at arms’ length from the revolutionary movement, refusing to attend a number of protests and tail-ending the movement when it has been involved. Instead, the Brotherhood has concentrated on gaining electoral success in the upcoming parliamentary elections, which it is widely expected to dominate due to its large national organisational network, which, unlike other political groups, pre-dates the revolution.

Now divisions are beginning to occur within the Muslim Brotherhood between the old, elitist, opportunist leadership and the younger members, who, like the rest of the Egyptian youth, are the most revolutionary layer of the movement. The Brotherhood leadership, which is more concerned with its own interests than that of the revolution, and which is scared of the size of the latest protests, has advised its members to avoid the demonstrations. This has led to the resignation of many younger members from the Brotherhood.

What this highlights is that the old (and new) political divisions in Egypt are breaking down and polarising into two camps: revolutionaries and counter-revolutionaries. What is also clear is the complete absence of any mass organisation that is able to represent the desires and needs of these revolutionary youth. It is this lack of leadership – the missing subjective factor – that is one of the most striking features of the Egyptian revolution and that is, in the final analysis, the main barrier standing between the Egyptian masses and the potential of taking power.

In the February days, it was the impact of the workers on the revolution, through a wave of mass strikes, that ultimately led to the toppling of Mubarak. Indeed, this September was characterised by a further wave of strikes throughout the country (http://www.marxist.com/egyptian-working-class-organising-and-on-the-move.htm). The latest protests have seen the youth at the forefront, as was the case in the first wave of revolution. This will inevitably be followed by movements of the working class. Already workers from Suez and other parts of the country have called for an indefinite general strike, but because of the lack of organisation on a national scale, this is yet to materialise.

What is needed now is for the Federation of Independent Trade Unions, which has been newly formed since February, to mobilise all its forces, not simply by joining in the protests in Tahrir Square, but by calling for a general strike. Such a move would hold a fire to the backsides of the SCAF and ensure a speedy departure of the military regime.

The important question regarding the possible fall of the SCAF is: who would fill the void? As is often said, nature abhors a vacuum, and this is even more the case in politics. Regarding the most commonly cited possibilities, the leadership of the Muslim Brotherhood have consistently revealed themselves to be against the revolution, and it is clear that a liberal bourgeois government, perhaps with a presidential figure such as Mohamed El Baradei, would be able to solve none of the social and economic issues that have been posed by workers and youth throughout the revolution. One must not forget that the demand for “social justice” has been consistently made since the beginning of the movement; despite some suggestions, the Egyptian revolution is clearly about more than just establishing a democratic civilian government.

Any new government will, in the end, be faced with the task of solving the problems facing the Egyptian people; the task of providing jobs, increasing wages, and improving public services. But none of these issues can be solved on a capitalist basis. Despite consistent economic growth in Egypt, inequality has grown; youth unemployment, like the rest of the Arab world, is extremely high, with official estimates (which are very likely to be underestimates) of around 25%; inflation is biting into already pitiful wages.

The tasks facing Egyptian workers and youth, therefore, is to take power into their own hands – both politically and economically – and not to place their trust in any of the fair weather friends of the revolution. Once again, this raising the question of the need for the independent trade unions and the labour movement as a whole to assert itself, and for the need to build a revolutionary organisation in Egypt that can unite the various struggles and lead the movement forward – forward to socialism.