On the weekend of June 29-30, Fightback held its first-ever Marxist Summer School in Edmonton, Alberta. Mirroring our annual Marxist Winter School in Montreal, close to 60 people attended the school, making this the largest Marxist gathering in Alberta in recent memory. People attended not just from Alberta, but many came all the way from Ontario, Quebec, Nova Scotia, British Columbia, and the United States. The resounding success of this inaugural Marxist school proves that there’s a genuine thirst for revolutionary ideas in Alberta.

Setting the stage: What is Marxism? 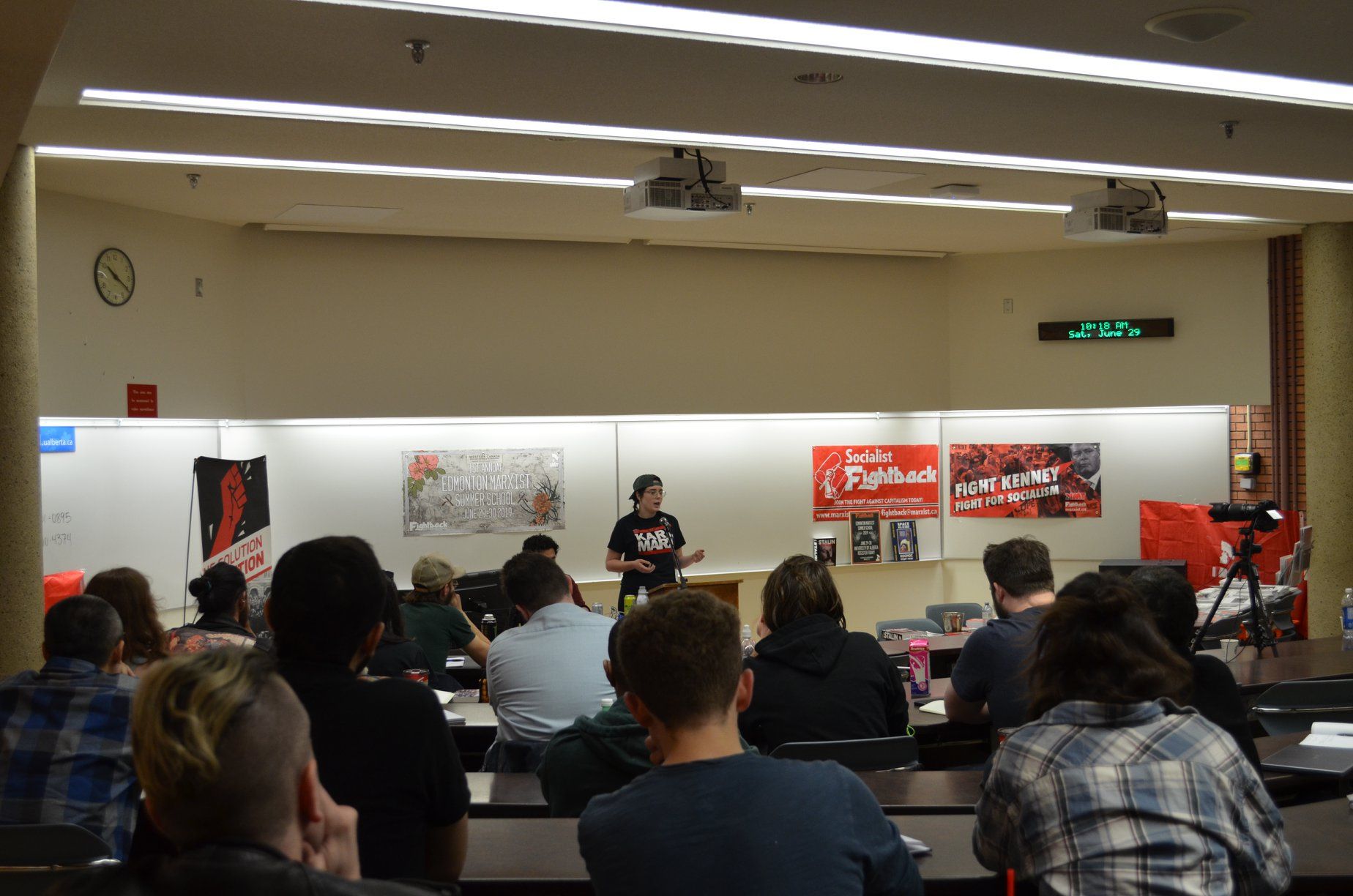 The school kicked off with a presentation on the main principles of Marxist theory. With rampant misconceptions and slanders against the ideas of Marx, it is important to give a clear overview of what he truly stood for.

The body of ideas worked out by first by Marx and Engels and contributed to by many other great Marxists over the years constitute a fully worked out theoretical basis for the struggle of the working class for a higher form of society: socialism. Beginning by developing the philosophical method of dialectical materialism, Marx used this method to uncover a general understanding of the history of the human race—of which the development of the productive forces is the motor force—as well as the inner workings of the capitalist system itself. These ideas are absolutely essential for working class militants and youth today to understand our society so that we can fight to transform it. It is for this reason that the ruling classes are constantly trying to prove that Marxism is false and no longer relevant. They cannot defeat an idea whose time has come, as is witnessed by the fact that more and more youth and workers are searching for Marxist ideas to help them fight against the capitalist system.

The presentation was followed by a lively discussion period, with many great questions and explanations brought forward by the attendees.

Capitalism and the ecological crisis

The second presentation of the day was on capitalism and the ecological crisis. Climate change is now an indisputable threat to humanity. Under capitalism, the worsening of the environmental crisis will mean—and has meant—catastrophe and death for many working class people, primarily the poorest in society. 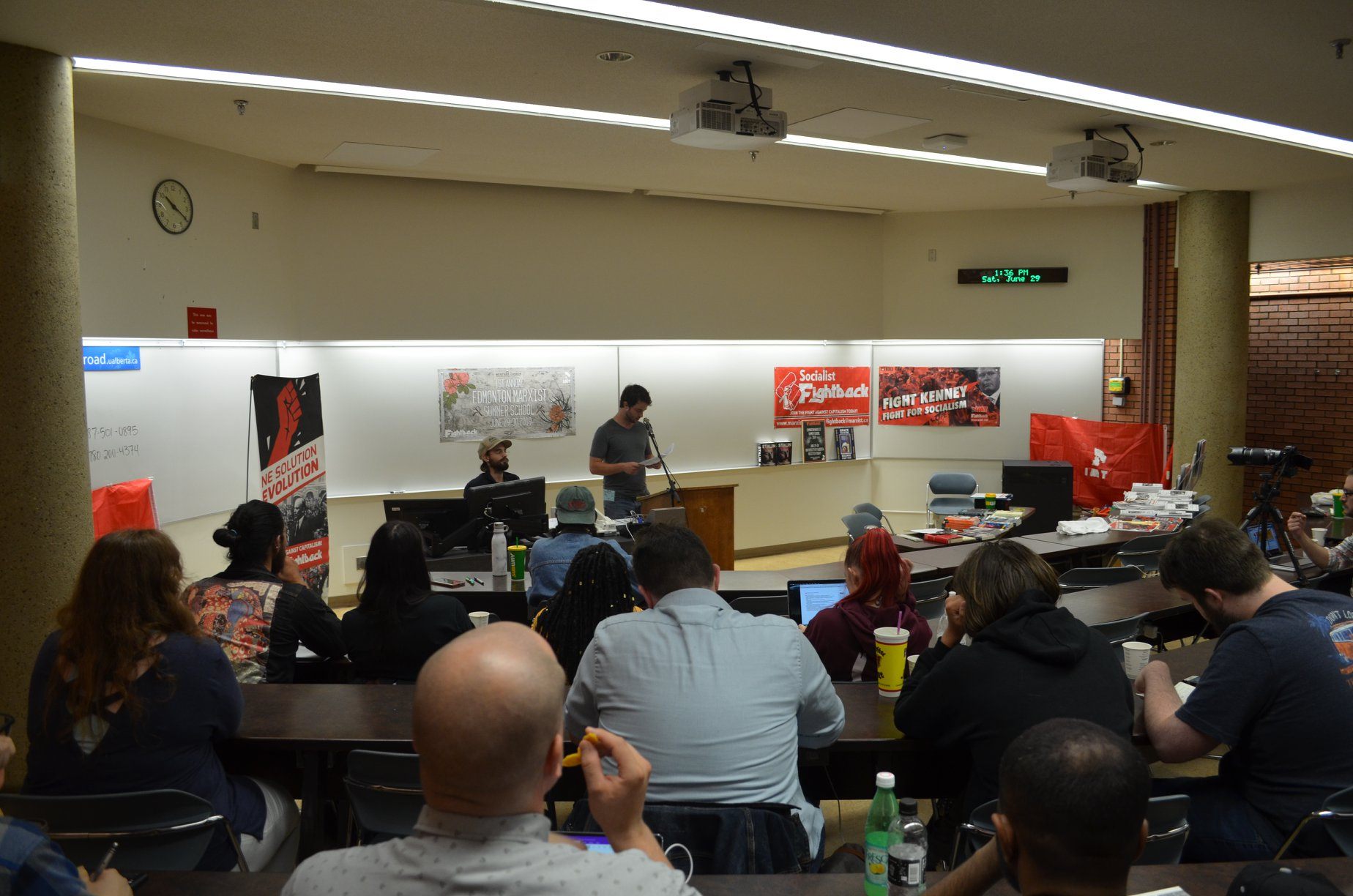 The environmental crisis that we are facing today is a direct consequence of the capitalist system that seeks profit above everything else. We are often told that the best way to confront the climate crisis is to “vote with your dollar.” However, in a world run by billionaires, the tiny minority at the top of society clearly has significantly more dollars to vote with than we do. If capitalism is at fault, the solution lies not in tinkering with capitalism with the false hope of achieving some sort of green capitalism, but to do away with the system altogether in order to save the planet and humanity.

The Winnipeg General Strike of 1919

Day one of the Marxist summer school wrapped up with a presentation on the Winnipeg General Strike. Bourgeois pundits, journalists, and politicians often portray Western Canada as inherently right-wing. But to do so is to erase the region’s long history of militant class struggle, and the Winnipeg General Strike of 1919 was part of that proud history of class struggle in the Prairies. 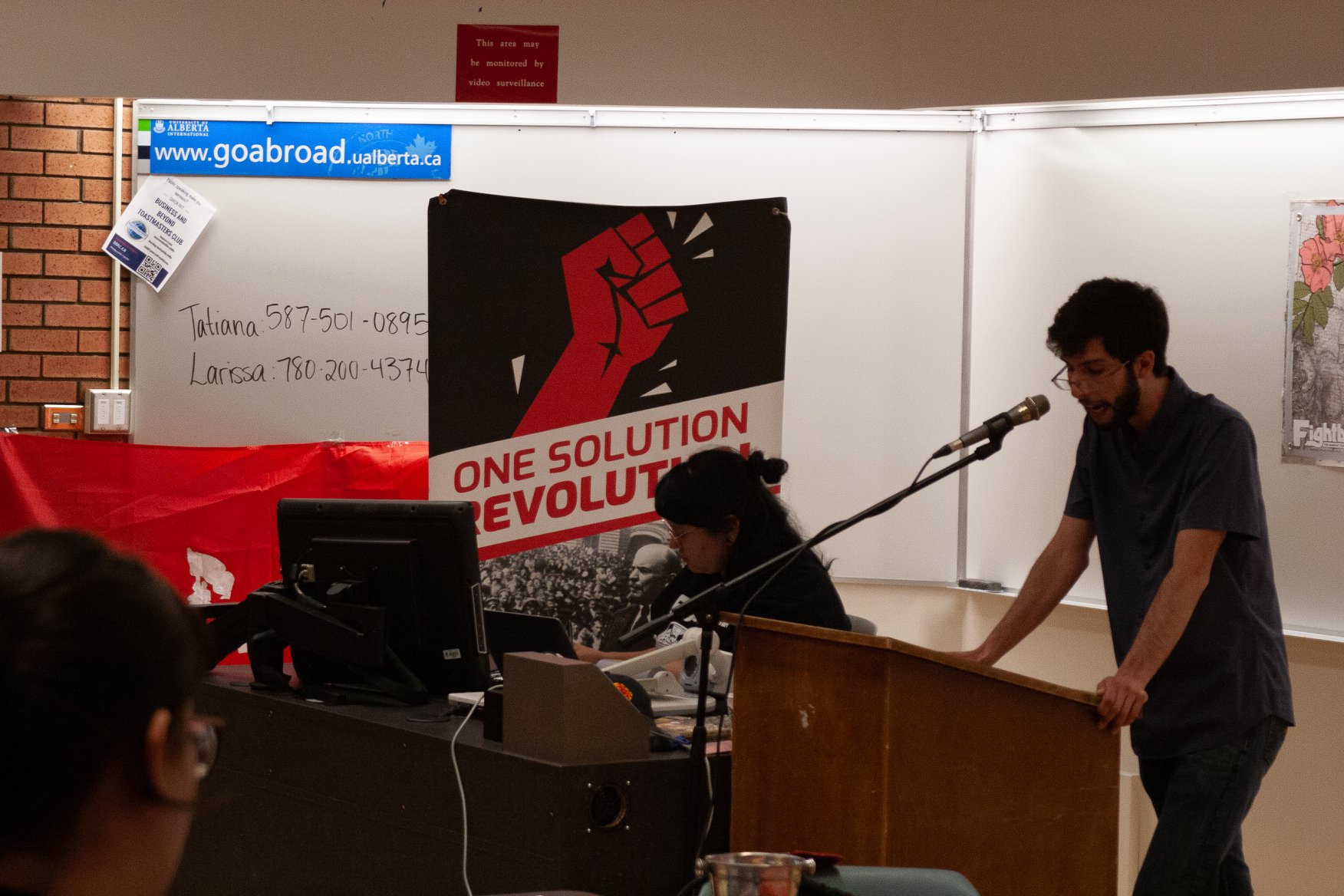 The strength of our movement lies in the fact that we have more than 100 years of lessons that we can draw from. The Winnipeg General Strike remains such an inspiration to workers today that even the National Post, that right-wing mouthpiece of the ruling class, had to write an op-ed telling people “Let’s not romanticize the 1919 Winnipeg General Strike.” On that note, we can agree with the National Post that our task is not to romanticize the general strike—our task is to learn its lessons so that the next general strike in Canada can lead to workers to victory.

The main lesson from the general strike is a common one: that of the need for revolutionary leadership. The heroism of the working class militants and the leaders of the strike in the end was not enough to win. What was missing was the general understanding that on its own, a simple trade union struggle on the economic plane is not enough to defeat the capitalist class. The need for revolutionary leadership was a central lesson drawn by many labour militants who went on to form the Communist Party of Canada just two years later in 1921. We need to re-learn this lesson today and build a revolutionary leadership capable of leading the workers to victory against the bosses.

Marxism and the Indigenous struggle

Day 2 of the Edmonton Marxist school was opened with a presentation on “Marxism and the Indigenous Struggle.” The brutal oppression against Indigenous peoples is woven deeply into the fabric of Canadian capitalism, and any revolutionary organization worthy of their name has to have a thorough understanding of this question.

There often exists a notion that the ideas of Marxism are somehow foreign to the Indigenous struggle. This could not be further from the truth. From the time of Marx and Engels, Marxism has analyzed colonialism and paid specific attention to the settling of North America. Marxism is not a specifically European ideology, but a living, breathing philosophy of struggle that can be and has been used as a method for not only understanding modern struggles, but also as a tool for revolutionary change.

Indigenous and non-Indigenous workers alike have a common interest in uniting to overthrow their common oppressors: the capitalist class and their state. The poison of racism only serves to weaken the struggle of the working class and can only be overcome through a united struggle for socialism. A united, revolutionary struggle against capitalism provides the only path forward for the liberation of Indigenous people.

Fightback is in the process of publishing a booklet on the question of Indigenous struggle, based on the document that was discussed at the Fightback congress earlier this summer. We hope to publish this work by the end of 2019, if not sooner, and expect it to be an important contribution to the theoretical arsenal of working class struggle.

Fight back against Kenney!

The final session of the school was dedicated to a discussion on how we can fight back against Jason Kenney and the United Conservative Party. The presentation looked into how the economic crisis and the fall in the price of oil transformed the political landscape of Alberta. From the emergence of the Wildrose Party, the end of the Conservatives’ political hegemony and the victory of the ANDP, to the recent return of the Conservatives to power, politics in Alberta are following the same trend we have seen around the world with the establishment being punished by the masses.

The newly elected UCP have wasted no time and austerity measures are being rolled out at an increasing pace by the UCP government. The only way that Alberta workers can confront these attacks is to revive the militant traditions of the past with mass actions which stop this government in its tracks. With his cuts, and the arrogant manner in which he pushes them, Jason Kenney is preparing a social explosion. Radicalization of youth and workers is on the order of the day, and the success of our Marxist school is proof of that.

Building the forces of Marxism in Western Canada

The attendees did not showing any signs of fatigue after two days of intense discussions. In fact, the opposite was the case with the energy being palpable in the room. The dedication to study Marxist theory and revolutionary history was evident by the fact that attendees swarmed the literature table, purchasing more than $1200 worth of Marxist literature, books, booklets, and magazines.

The forces of Marxism are on the march in Canada. While Fightback has traditionally been based mostly in Montreal and Toronto, we are now breaking into the west of the country. Alberta is often portrayed as a right-wing province where no one is interested in socialist politics, but this couldn’t be further from the truth and we are proving this in action. We hope to build the Edmonton Marxist Summer School into a yearly rallying point for anyone interested in revolutionary Marxism in the west of the country!