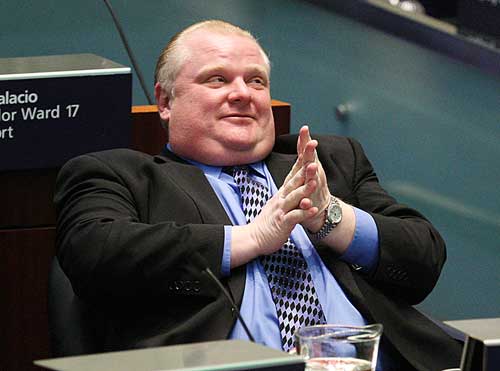 In very quick succession, the bad news continues to rain down from the different layers of government in Ontario.  The Rob Ford municipal government in Toronto is making no effort to hide the fact that they are preparing a long lockout of city workers in January 2012.  Meanwhile, the provincial Liberals’ throne speech outlined historic cuts in provincial spending — even greater than those seen in the Mike Harris days. As 2011 comes to a close, it is appearing that Ontario workers will have the fight of their lives on hand in 2012.

As this article is being written, Toronto mayor Rob Ford is presenting the city’s budget, which will be debated and voted upon in January.  As predicted, the budget slashes city services, especially those that are most used by working-class and poor people, as well as cutting a huge swath in Toronto’s public service.  2,338 city jobs are to be eliminated right away.  Considering Ford’s previous comments that city employees are “gravy”, this is surely only the first blow in a series of cuts to jobs in Canada’s largest city.

The service cuts appear to be Grinch-like in their vindictiveness, considering the paltry savings they will achieve.  For instance, the city is eliminating 138 arts projects and programs, which will only end up saving a total of $1.94-million (out of a total budget of nearly $9.4-billion).  Ford must believe that the AIDS crisis has been solved as the city’s budget also eliminates three HIV/AIDS programs, the Global AIDS initiative, and three drug prevention projects.  Ford refuses to even think of the children, as the city is preparing to cut 58 student nutrition programs that help to feed over 14,000 needy children!

Day-to-day services used by all Torontonians are also to be cut, or have large user fees introduced.  Seven wading and swimming pools are to be permanently closed; often, these are the only sources of relief for people who don’t have access to air conditioning in Toronto’s muggy summers, raising the possibility of heat-related injuries during the summer months.  As well, the city will be able to save $1.72-million by cutting scores of community services and programs in “vulnerable communities” — ones that the Toronto Star identifies as primarily helping at-risk children and youth.

On top of the cuts outlined in the city budget are the service cuts aimed at the Toronto Transit Commission (TTC), announced a few days earlier.  TTC chair Karen Stintz announced cuts and “efficiencies” on 62 bus and streetcar routes throughout the city.  Even though transit ridership across Toronto has hit record-highs, these cuts will reduce service back to 2004 levels!  Toronto’s commute times are already the worst in the world, and Ford’s government will only make them worse.

But, the real axe is aimed at public-sector workers.  As mentioned, over 2,300 city jobs will be chopped in 2012 alone.  However, as drastic as this may appear, this is only the tip of the iceberg in Ford’s attacks on working people.

As we previously outlined in August (“For a one-day general strike to reverse the Rob Ford cuts”), the civic unions have known that Ford & Co. were preparing to lock-out city workers as soon as their contract expires at the end of December.  But, we now are getting a full sense of what the city is preparing to do to ensure they get what they want.

In an article titled, “Expect Armageddon at City Hall,” the Toronto Star’s Royson James outlined the city’s preparations in confronting the civic workers’ unions in January 2012:

“City managers are learning how to operate heavy equipment. Senior bureaucrats have put in place contingency plans to run operations minus 29,000 employees. And the civic unions are telling their members to expect a long, tough winter without a regular paycheque….  Mayor Rob Ford has been spoiling for this epic showdown since he arrived at Toronto city hall almost 11 years ago as a councillor from Etobicoke. Ford Nation is rubbing its digits in glee, champing for a bite out of the hide of those lazy, no-good, overpaid city workers.”

As it turns out, internal city memos are warning city departments that they should be ready for a six-month lockout!  Repeatedly, the unions have been warning the press that the city’s negotiators have no interest in bargaining with municipal workers — that their bargaining has been little more than a 20-page document detailing cuts and concessions that they are seeking from city workers.

In other words, Rob Ford’s government is going to try to starve and break the union.  This is his real goal — to destroy the union’s ability to organize any sort of resistance to the corporate agenda in the future.  It is vital that all workers realize that this is not an isolated attack, but part of the larger attack on workers across the country and around the world.  What the bosses are seeking in this age of austerity is not just a more business-friendly contract, but a destruction of workers’ ability to organize and resist.  We saw this in the year-long lockouts at US Steel in Hamilton and at Vale-Inco in Sudbury; we also witnessed this in the federal Conservatives’ back-to-work legislation against Canada Post and Air Canada workers.

When workers’ ability to even organize is at stake, the resistance cannot simply be economic.  Previously, unions would work at mobilizing their members to fight for a better contract.  However, now, the fight back needs to be political and one that includes the whole of the working class, not just one union’s members.

Members of CUPE locals 79 and 416 (which represent Toronto’s inside and outside workers, respectively) saw what happened with the old style of bargaining in 2009.  Then, the city government and the business press was successfully able to demonize the city workers in front of the general public.  Although the unions were able to fight back against many of the concessions being demanded by the municipal government, the struggle could have been much easier (and perhaps more successful) if they had been able to rally other workers, including the unorganized, to their defence.  (More of our analysis on the 2009 strike can be found in our article, “Workers win Toronto civic strike”).

Looking closely at the upcoming municipal attacks is Liberal premier Dalton McGuinty.  Just days before Ford outlined Toronto’s city budget, McGuinty’s minority government outlined their throne speech, warning Ontarians of tough times ahead.  There was little of the optimism that McGuinty displayed during the provincial election campaign less than two months ago which saw the Liberals re-elected for a third consecutive term.

In his throne speech, McGuinty committed the Ontario government to balancing its budget by 2018 on the backs of public-sector workers.  The Liberals promised to cut the provincial civil service by five per cent by March 2012, and by an additional two per cent by 2014.  There will also be a further $200-million worth of “workforce reductions” at other government agencies, also by 2014.  Promising to maintain healthcare and education spending, other government agencies and ministries could see cuts of up to one-third!

Mobilizing the resistance to austerity

This time around, the union leaders seem to have learned some very important lessons from previous strikes and have taken a proactive approach in building a class-wide resistance to the Ford agenda.  CUPE 416 president Mark Ferguson has been wise in telling people that if city services are suspended or cut, it is not because of union workers; instead, the blame lies with Ford’s planned lockout.  The two CUPE locals have also been canvassing all different types of community groups, advising them of the city’s plans to eliminate service and how this will affect Toronto as a whole, not just unionized workers.

It appears that the unions’ efforts have been working so far.  A large anti-Ford rally organized by the Toronto & York District Labour Council attracted 7,000 on a Monday evening as the city council met to discuss the KPMG core services review.  Rob Ford’s support has plummeted across the city, even in the inner suburbs where much of his support was centred in the city elections last year.

The CUPE locals, along with the Labour Council and the Ontario Federation of Labour (OFL), must continue to mobilize everyone who is going to be affected by Rob Ford’s cuts — union workers, unorganized workers, students, immigrants, artists, the poor, etc.  The attack on public sector workers is meant as an attack against the most organized out there.  Undoubtedly, Ford and his allies are hoping to break the union, which would make attacks on other groups much easier.

The living conditions of the vast majority of the population are only continuing to get worse, particularly in Ontario.  New figures from Statistics Canada show that the average wage in Ontario continues to drop at a much higher rate than the national average.  In September, the provincial average wage dropped by 1.3% over the previous year, dropping Ontario’s workers behind their Saskatchewan counterparts for the first time in history — a long cry from when Ontario workers formed the bedrock of Canada’s middle-income workforce.

The large degree of support and participation, especially among youth, for Occupy Toronto shows that there is a great deal of anger and discontent in society, and that people are desperate to change the status-quo.  Unfortunately, the Occupy movement was unable to provide the needed leadership or direction that could have really challenged the existing capitalist system. But, the labour movement could step into this void and lead a mass movement against cuts, attacks, and austerity.

The labour movement needs to lead the charge.  The labour movement’s leadership needs to go out into neighbourhoods, workplaces, and other communities to mobilize the unorganized, and inform people that Ford and McGuinty’s efforts to break the unions will only lead to a lower standard of living for all people.  The labour movement needs to organize education sessions, townhalls, rallies, and acts of civil disobedience — up to and including a one-day general strike to reverse the cuts. Ford will not back down in the face of partial actions – he must be shown the full force of the working class.

What the working-class lacks, at this moment, is a sense of its own power.  Many of us who are unorganized at the moment can feel quite hopeless in the face of an enemy like Rob Ford and his Bay Street cronies.  The unions, with their collective strength, can give the rest of us a sense of our true power — not one wheel turns, not one light shines without the permission of the working class.  A united movement of all workers, youth, students, immigrants — the 99% — can defeat this program of cuts and austerity.