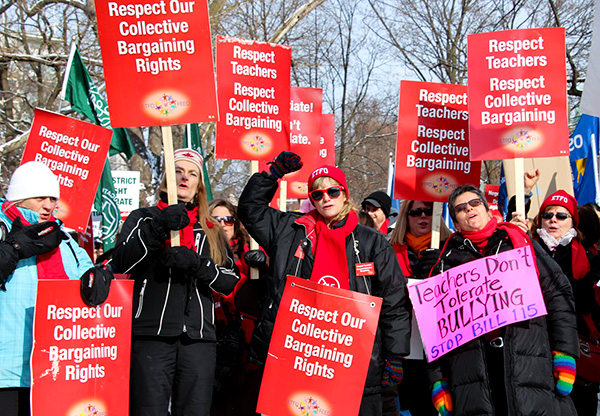 As many as 25,000 people, wrapped up in winter coats and scarves bearing the logo of the Ontario Federation of Labour (OFL), braved the frigid conditions to protest the Ontario Liberal leadership convention and the Liberals’ trampling of workers’ rights.  The demo was one of the largest in Ontario since the Days of Action protests of the 1990s and hopefully marks the beginning of labour’s fight back against austerity.

Concerned unions showed up in force, including CUPE, Steelworkers, the Elementary Teachers Federation of Ontario (ETFO), and the Ontario Secondary School Teachers’ Federation (OSSTF). The latter two have been waging a fight for months against the Liberal government taking Ontario teachers’ right to strike and right to collective bargaining away.

Ontario unions have faced a variety of cuts to wages and services lately, from mandatory wage freezes to legislation making it illegal for some public sector workers to go on strike.

The most publicized point of contention is Bill 115, known as the so-called Putting Students First Act, which takes away teachers’ right to strike and imposes a two-year austerity contract upon them — essentially, taking away the teachers’ rights to collective bargaining. Although the protest at the Liberals’ leadership convention was focused on the teachers’ fight against Bill 115, it also represented all of the cuts forced upon workers by the Liberal government.

The Globe and Mail quotes outgoing Finance Minister Dwight Duncan as saying that “everyone needs to do their part to balance the budget.” But, who is Duncan truly referring to? Is he referring to the Bay Street banks, which recently reported record profits? Is he referring to the industrial bosses who have pocketed billions of dollars in subsidies, handouts, and corporate tax breaks?

In contrast, the Ontario Public Service Employees Union (OPSEU) have quoted a study by the Mowat Centre’s Matthew Mendelsohn which argues that “[Ontario] already runs the least expensive, most efficient programs in the country.”

These policies and similar ones to other sectors of labour were the focal point to the day’s rally. CUPE Ontario president Fred Hahn said, “We will never forget when they stripped people’s democratic rights to free collective bargaining.” Hahn made clear that he was referring to both the Liberals and Conservatives, the two parties of Bay Street, “We must never forget that this is not a debate about who is more evil, the Liberals or the Tories; they’re all evil!” This message was echoed in the speech given by the president of the Public Service Alliance of Canada (PSAC).

The massive rally was organized by the OFL, and although it was held in downtown Toronto, it attracted workers from London, Hamilton, Kingston, Kitchener, and Oshawa. And, the demonstration didn’t just attract organized labour, as evidenced by the many different groups present.

After three hours at Allan Gardens the protesters marched to nearby Maple Leaf Gardens, where the Liberal leadership convention was taking place. The crowd blocked the intersection at Carlton and Church Streets, shouting slogans in anger at the politicians. The message, displayed on placards and in voices, was simple: workers will not stand down while the government takes away benefits, cuts jobs, and ends the right to collectively bargain.

Ken Coran, president of the OSSTF, said, “We’re going to teach the Liberal Party, all politicians, and any government a lesson. And here’s what that lesson is … three things: be fair, be respectful, and be democratic.”

As admirable as this sentiment may be, in the current epoch of austerity capitalism, the bourgeois and their representatives in government have made it very clear that they will make the working class pay for the crisis, regardless of the consequences.  If it means the trampling of democratic rights, then so be it.  Thus, the leaders of the workers’ movement must be prepared to defy illegitimate laws if workers are to preserve their rights and their standard of living.

In January, it was apparent that both elementary and secondary school teachers were prepared to defy Bill 115 en masse and go out on one-day strikes, only to have the union leadership buckle under a court injunction and call off the strike at the (literal) last minute.  At the time, the teachers’ union leadership had said that unlike the government, teachers would continue to obey the law.

All this does is effectively handicap their members in their fight for a better standard of living.  Across the country, governments and the courts are regularly involving themselves in labour disputes and siding with the bosses.  At Air Canada, CP Rail, Rio Tinto Alcan, Canada Post, the Toronto Transit Commission — the list goes on and on.

A couple of weeks after the mass demonstration at the Liberals’ convention, the Toronto Star revealed that an OSSTF local in Toronto had donated $30,000 to four Liberal leadership candidates.  The donations included Kathleen Wynne, who emerged victorious in the campaign and is now Ontario’s new premier.  What sort of message can this send to rank-and-file teachers, who have been doing their utmost to fight the draconian attacks by the Liberals, when their leaders are continuing to cozy up to this anti-worker government?

To stop the attacks by Bay Street and the government, at some point, one union will have to defy the law.  The ruling class may appear to be all-powerful, but the working class does possess an even greater power — the ability to shut down the economy and bring everything to a halt.  Without the working class, nothing in society would function.

If one union dared to defy the law today, it would certainly bring the whole of the workers‘ movement out with it.  There is great turmoil and anger within society today, but up until now, it has had no outlet.  As last year’s student strike in Quebec revealed, all it would take in this epoch is for one challenge to austerity to be made and the rest of the working class and youth would follow.

In such an environment, all of the antidemocratic laws passed by government would become utterly unenforceable.  Despite draconian laws and vicious police repression, the Quebec provincial government was forced to back down in the face of a mass movement.  This was possible, not because of back-room deal-making with the Quebec Liberals, but because of the hundreds of thousands on the streets who were willing to defy anti-democratic laws.

The financial crisis that Ontario finds itself is very real.  Last year’s Drummond Report made it very clear that the Ontario government must use every means at its disposal to restore the financial equilibrium, and that the working class and youth of this province will be the ones who pay for the crisis.

The labour movement must re-discover its fighting traditions.  If it had not been for workers defying the laws in the 19th and early 20th centuries, we would not enjoy the benefits and rights (including the right to organize) that we have now.  However, if the labour movement is not prepared, or not willing, to defy illegitimate laws, then all of these gains will disappear.

Going forward, the unions will need to fight even harder than before. In Fred Hahn’s words, “We must never forget, my friends, that there are more of us than there are of them.” Workers are the majority, and are the backbone of the economy; if this power is leveraged to defy back-to-work legislation and block unfair contracts, then workers can win.

The unity of the working class must not end on the snow-covered streets but be carried into the next fight, to end austerity and defend collective bargaining rights!