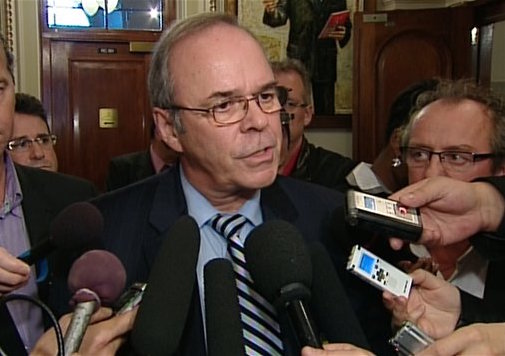 It has recently come to light that Quebec police have been spying on journalists. At least six different journalists have had their phone calls and text messages monitored for years, in addition to their locations being tracked by GPS. This comes immediately on the heels of police seizing Journal de Montreal reporter Michael Nguyen’s computer. These events have shocked many people and are just another example of how our democratic rights are being trampled on in Canada.

Interestingly, they were spied on for five years spanning 2008 to 2013 which corresponds to the years of the corruption scandal revealed by Enquête. During the scandal, it had come to the surface that there were links between the mafia and the leadership of the biggest union in the province, the FTQ (Fédération des travailleurs et travailleuses du Québec). There were several articles which were published in the papers uncovering this story and in particular how then FTQ president Michel Arsenault knew about this, but turned a blind eye.

According to Isabelle Richer of Enquête, “Michel Arsensault was under scrutiny at the time. He was upset, so he complained to the SQ, which forced police to do an inquiry … So they decided to ask for this warrant to spy on our cellular phones.”

When asked to comment on this case in particular, Public Safety Minister Martin Coiteux had to admit that, “It is very peculiar. The head of the FTQ calls the SQ first thing in the morning, and that night an investigation is launched.”

Another journalist who has been spied on at least three times is Patrick Lagacé of La Presse. It all began when Montreal Mayor Denis Coderre contacted then SPVM Police Chief Marc Parent about Patrick Lagacé, who had been digging into rumours about an expired licence plate ticket that he allegedly did not pay before he was elected mayor in 2013. Police officers met with Lagacé and demanded that he reveal his sources to them, which he refused. Following this, they obtained a warrant to monitor his cellular activity. At the time, Coderre was embroiled in a rather intense labour dispute with the police union and a series of stories had been published in the papers about it. Coderre had become worried that individual police officers were leaking information to the press about him.

While Coderre laughably claims to have spoken to Parent “as a private citizen,” it is clear that political pressure came to bear as the SPVM immediately began monitoring Lagacé’s cellphone. According to Lagacé, “Political pressure made its way down the hierarchy, and people did dumb things, which [includes] spying on journalists.”

According to Lagacé, this is an issue of political intimidation where “for a long time, the [Montreal police force] has been irritated by the fact that articles are being written about its internal affairs, on police operations or internal dysfunction.” He continued to say that, “I have done a few of those articles over the years. I’m convinced this is an attempt to intimidate everyone inside the police force who may want to talk to a journalist.” He later added that, “The leaks made them look bad, that’s why they decided to go after me in the way they did.”

More recently this year, Costa Labos who, as the head of the Montreal police’s internal affairs department, approved yet another operation to spy on Lagacé. According to Labos, this was done as part of an internal investigation into a number of officers who were suspected of leaking information to the press. Labos, who gave the green light to the latest investigation, claimed that “to his knowledge” no other journalist was being spied on by police in recent years but that he could not “guarantee” this.

The day after this story broke, Labos was removed as the head of internal affairs for the SPVM. This has also led to the Montreal police union to call for police Chief Philippe Pichet’s resignation and as Police Brotherhood president Yves Francoeur said, “What worries me, is to see that director Pichet is not capable of certifying whether or not there are other journalists who are under investigation.”

In what is probably an even more flagrant abuse of power, in September, the SQ physically seized Journal de Montreal reporter Michael Nguyen’s laptop on suspicion that he had illegally hacked a private website to obtain his information. The Journal de Montreal has denied that anything illegal was done by their reporter and it has been noted that this information is in fact available online through a simple Google search.

Legally taking away our rights

Upon learning of this clear breach of the freedom of the press and elementary privacy rights, most people would assume that this sort of thing could not be legal. However, in all cases, the SQ and the SPVM obtained warrants from judges which allowed them to legally spy on these journalists. In addition to this, according to criminal defence lawyer Jeffery Boro, in Lagacé’s case, “it was particularly easy.”

There were 24 warrants issued to authorize spying on journalists in 2016 alone. These were obtained within the framework of Project Escouade, which is an investigation that has the supposed purpose to root out police officers who have been fabricating evidence. Most of these surveillance warrants were authorized by Judge Josée Carufel of Montreal. Carufel previously worked as a lawyer for an association of construction contractors, many of whom were implicated in the corruption scandal. These facts have contributed to a perception of bias.

The shocking thing for many people is that this is coming not long after the aforementioned corruption scandal which was supposedly dealt with. Now not only are the elected officials corrupt, but the police forces are spying on and trying to intimidate journalists! For many, it has become clear is that this sort of thing is endemic to the state in Quebec and cannot be fixed by throwing this or that person under the bus. As Marie-Maude Denis of Enquête stated, “It’s a widespread practice. With the facts we have now, it was a widespread practice.“

While this is news for these journalists, infringing on basic democratic rights and freedoms has actually been the norm for activists for a long time. From Bill C-51, to CSIS illegally spying on Canadian citizens for a decade, democratic rights are being trampled underfoot. Governments all over the globe have been shedding their democratic veneer and have massively expanded surveillance capabilities and increased the powers of police forces.

But this should not come as a surprise at all. In fact, this is just another example of how our democratic rights are being taken away under capitalism. As the crisis of capitalism gets worse, the pressure mounts in society and different sectors seek shady ways to guarantee their profits and private interests. This isn’t the product of ‘a few bad apples’ but is the product of a system and a society in decline. To truly fight against this violation of fundamental rights and freedoms, we need to fight for a new society – a socialist society.