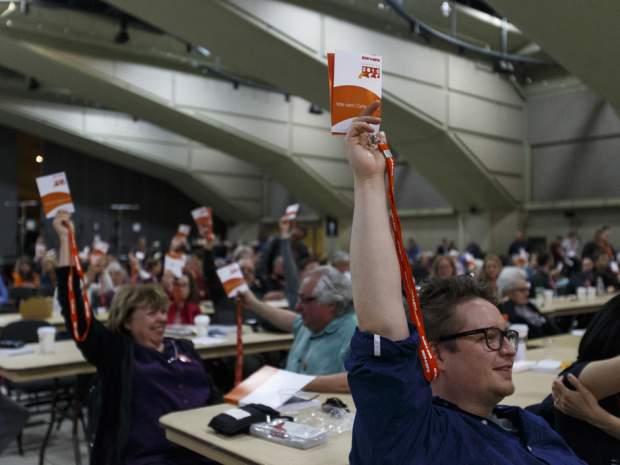 Federal NDP leader Thomas Mulcair suffered an historic defeat as 52% of the 1800 delegates who attended the April 8-10 convention voted for a new leadership. It is the first time any major party leader in Canada failed to win the confidence of the membership in a leadership vote and actually lost a leadership review. As the CBC pointed out, “To put this into context the last time a major federal party leader lost a leadership review was Joe Clark in 1983. Joe Clark got 67 per cent support.” This is a solid defeat for the bureaucracy, visited upon them by a rank-and-file revolt against the failed rightward turn of the party.

The mood at the convention was the most left-wing it has been in decades. Just a few short years after the crowning of Mulcair as leader and the removal of references of socialism and social ownership from the party constitution, things have turned around entirely. Many members were frankly livid at the dismal moderate campaign the party ran during the last election and the clamping down on any genuine left voices. This, combined with the rise of figures like Jeremy Corbyn in the UK and Bernie Sanders in the US, has shattered the belief that left-wing socialist politics cannot be popular.

Sensing the anger from the ranks and the desire for socialist politics, Mulcair had tried to bend to the left. At the youth convention on the Thursday before the main convention, Mulcair accepted nearly all of the flurry of harsh critiques from youth delegates and claimed that he agreed with all of the points in the statement issued by the youth executive just a couple of days earlier calling for him to resign. Apparently he was “feeling the Bern” as he referenced Bernie Sanders and spoke hard against “a rigged economy.” These cheap gestures were, however, too little too late and the word “socialist” on the lips of Mulcair dripped with insincerity and hypocrisy.

Even party president Rebecca Blaikie in her last speech in the position tried to claim that “I would be remiss if I didn’t take the opportunity to correct the record a bit, which is the impression that the word socialism was somehow taken out of our constitution at the last convention. Far from it, our democratic socialist and social democratic principals were affirmed…” For delegates who were present at the last convention, this ridiculous statement didn’t help the party leadership but only served to expose their insincere pandering.

As the convention approached, the party bureaucracy pulled out all the stops to try and save Mulcair. Endorsements rolled in from NDP MPs and labour leaders. Many union tops undemocratically rallied to Mulcair’s aid, without any consultation of their members who were obviously yearning for change. Unions bussed in hundreds of trade unionists in order to back Mulcair but not even this could save him. At convention, a labour caucus meeting of over 280 delegates, was split on whether or not to support Mulcair, in spite of the insistence of many labour leaders and therefore remained neutral on this question.

Other than the question of leadership, the only real contentious point of debate at the convention was that of the Leap Manifesto. When the debate hit the convention floor, it became a rallying point for the anti-establishment mood in the party and it passed by over 60%. This was mostly because there was no other significant left-wing policy for people to rally behind. Unfortunately, the Leap Manifesto is very vague and contradictory at times. It does not mention capitalism, does not say the word socialist, and simply speaks of putting pressure on the Liberals. It would be extremely unfortunate if this is as left as the current mood in the party goes, as this is far too confused to inspire and mobilize masses as Bernie Sanders has clearly done with his “revolution against the billionaire class.”

One interesting thing is that the Leap Manifesto caused serious problems for Mulcair and was one of the aspects that led to his downfall. While he was tacking to the left prior to the convention he seemed open to the manifesto and called it “an aspirational document.” This seemed to have provoked a backlash from the 300+ delegates from Alberta with environment minister Shannon Phillips calling the document “ungenerous, short-sighted.” Alberta NDP Premiere Rachel Notley gave a rousing speech on Saturday which included a section against Leap and pleaded for the party to advocate in favour of a new pipeline to provide much needed jobs for the Albertan economy. This put Mulcair in a tough spot. Trying to bend left to save himself, he only succeeded in alienating the pro-pipeline Albertans. In the middle-of-the-road, Mulcair was hit by traffic in both directions.

By all estimates, the amount of delegates in favour of a new leadership was much greater than anyone expected. The reaction to the announcement of the vote results was at first more one of shock than anything else as delegates didn’t even realize their own strength. When we take into consideration that this opposition had no real focal point, this is all the more significant. If there had been a central figure, especially one prepared to challenge capitalism and austerity, to lead the charge against Mulcair and the bureaucracy, this vote would have been much greater.

For years, the constant refrain from small left groups and sectarians has been that “the bureaucracy is too strong,” or “The NDP will never change,” or even “The NDP is bourgeois,” etc. This convention is a clear refutation of this idea. The bureaucracy is not all powerful and the ranks of the party are starting to flex their muscles. This has confirmed the perspective of the Marxists as we explained that the NDP, in spite of the presence of Mulcair as leader, still has deep roots in the working class and therefore the pressure of the masses can reflect itself there.

Will there be a Canadian Sanders?

With Mulcair defeated, it is currently up in the air who will be the next leader of the party. The party changed the rules so the leadership vote may be up to two years away, with Mulcair staying on in a caretaker role. One thing however is certain – given the mood at convention, if Bernie Sanders were to get a Canadian passport, he would win this leadership contest by a landslide. If there were a candidate who put themselves forward and was at least as left-wing as Bernie Sanders, the election would be theirs to lose. As the more right-wing elements of the party are opportunistically tacking left, what is necessary is a bold critique of capitalism and an openly socialist program in order to enthuse and mobilize workers and youth, win the leadership of the party, and build a mass movement against the Liberal government.

Unfortunately, no one of significance has so far come out with anything like this so far. Various groups came out in opposition to the top brass, most notably Renew NDP which had about 100 at its pub night. Renew supported former Quebec MP Elaine Michaud as party president, who was a co- signer of a critical letter from party activists which stopped short of calling for Mulcair to go. The establishment candidate was Toronto school board trustee Marit Stiles. But Michaud’s platform was so vague as to be indistinguishable from Stiles’. The vote was therefore Stiles 65%, Michaud 30%, with Barry Weisleder of the Socialist Caucus bringing up the rear with 5% of the vote. There was much to commend in the Socialist Caucus platform, but the support for those ideas is not reflected in the low 5% vote for their candidate. Weisleder is not well liked in the NDP and has even managed to alienate many who support socialism. Michaud would have likely swept the election had she made clear socialist statements. Those who consider themselves left must learn the lesson of Corbyn and Sanders – you must be clearly socialist and anti-establishment to win. Vagueness means defeat!

Many people in the party have mentioned 33-year old northern Manitoba MP Niki Ashton as a potential candidate. Niki ran in the last leadership race on a soft-left platform and she refused to endorse Mulcair ahead of the leadership review vote. She was a vocal supporter of Bernie Sanders way before it was cool to do so and has been active on his campaign. Nevertheless, during the last leadership race her platform was very vague and she failed to become a rallying point against Mulcair. What Niki, or any other honest left candidate, would need to do is to openly put socialism at the centre of their campaign, with a firm critique of the capitalist system, calling for a revolution against the billionaire class like Sanders is doing in the United States. Bold policies like free education could mobilize hundreds of thousands of workers and youth. A call to nationalize oil, gas, and pipelines, under workers’ control and following the best environmental practices, could unite both oil workers afraid of losing their jobs, and those fighting to save the planet. These two goals need not be mutually exclusive.

Above all, a genuine socialist candidate must decry the injustice of capitalism, where the rich cheat the system and make the rest of us pay the bill. The New Democratic Party, Canada’s labour party, has just turned the corner from a generation-long slide to the right. Now there is an opportunity for the left to come forward, and the Marxists of Fightback will play their role in the fight for clear and unapologetic socialist policies.