One year after the Quebec City shooting: the fight against Islamophobia continues! 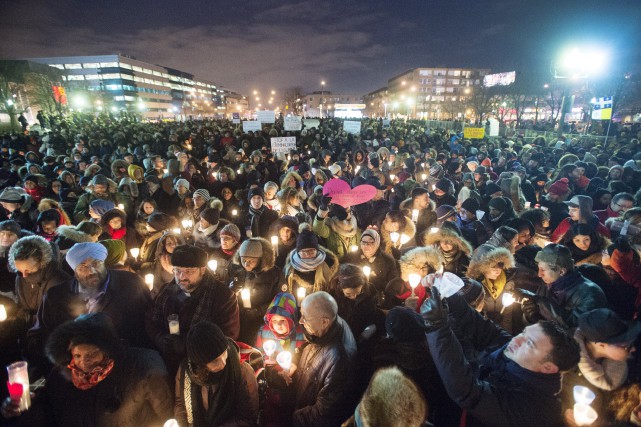 2017 in Quebec ended with a made-up, racist fake news story from TVA about alleged unreasonable demands by the leaders of a mosque in Côte-des-Neiges. The network reported that the mosque asked that there be no women on a construction site located nearby. This was subsequently denied by all involved, thus proven to be a complete fabrication. This incident reminds us that one year after the January 29th Quebec City mosque shooting, the fight against Islamophobia is far from over.

Several recent studies show that Quebec is witnessing a significant rise in hate crime, and that it is increasingly targeting the Muslim community. Hate crimes increased by 20% between 2015 and 2016. In Montreal in 2017, 125 reports of hate crimes were reported in just six months, compared with 137 for the whole of 2016. In Quebec City, hate crimes targeting Muslims doubled that year. This summer, even the president of the mosque where the January shooting took place was targeted by a hate crime, in which his car was burned.

2017 also saw far-right groups like La Meute, Storm Alliance, and Atalante come out of the woodwork. In the aftermath of the fascist murder in Charlottesville in August, and with the influx of Haitian asylum-seekers seeking refuge in the country this summer, these groups took the opportunity to come out into the open. We must be prepared to once again fight against these attempts to use racism and Islamophobia to divide us!

Islamophobia is not over

“So you finally thought that, in 2017, you were rid of the controversies surrounding the burka and the niqab, the halal menu at the hospital and the banning of ham at the sugar shack, thanks to the new law on religious neutrality of the State? Don’t fool yourself.” read an article published on January 2nd on the websites of Le Devoir and La Presse.

Already, the CAQ and the PQ have indicated that they oppose the modest request by dozens of Muslim groups to make January 29th a national day against Islamophobia and they were followed by the Liberals the week after. As well, the Liberals must also explain the “guidelines” for reasonable accommodations for their Bill 62 by June, which will be another opportunity to ignite the “debate” on religious symbols. In addition, the PQ promises a tougher law than the one passed by the Liberals if elected in 2018, while the CAQ promises to repeal Bill 62 once in power. This is likely to be an issue for the 2018 October elections.

It’s a safe bet that the major parties will do everything to keep these ridiculous “debates” erupting again and again, with the aid of the mainstream media. And why would they stop? These are very useful distractions for the Liberals, to make us forget the years of austerity they have made us suffer through, and for the CAQ and the PQ, to make us forget that their economic program is not much different from that of the Liberals.

No confidence in the establishment

In 2018, we can expect the far right to continue to show its ugly face. However, these far-right groups did not come out of nowhere. For over ten years, “debates” of all kinds about “reasonable accommodations” and religious symbols in the public service, debates systematically putting the Muslim minority on trial, have been used extensively by the major parties. This past year was no exception, especially with the Liberal’s Bill 62. These distractions only serve to divide the workers by entertaining the idea that the enemy is “Islam,” and thereby feed the far-right groups and justify their racist and Islamophobic rhetoric.

It is therefore not surprising to see the growth of far right-wing groups in this context. The normalized Islamophobic discourse is a fertile ground for them. Without denying the danger they represent or the need to fight against them, we must not panic or exaggerate the size and influence of these groups. Their demonstrations have attracted a few hundred people at most, and 2017 also ended with the split of La Meute, with two of the three main leaders jumping ship. This is a symptom of the weakness of this kind of group.

That being said, we cannot sit on the sidelines while our brothers and sisters are openly attacked by far-right groups, and by mainstream political parties in barely veiled ways. We must fight against all attempts to divide the working class on national, ethnic, religious, or other lines. We have reiterated several times in recent months that the only way to overcome racism and the groups that promote it is through the mass action of the working class and the oppressed. We had several examples of this last summer, following the events in Charlottesville, where mass demonstrations silenced the far right.

One of the main lessons from 2017 is that we can have no confidence in the major parties and institutions to fight against racism and the extreme right. We saw this when the Liberals opportunistically proposed a consultation on systemic racism, before dropping it in the hope of gaining additional electoral support. We also saw this when the Quebec police openly collaborated with La Meute and Storm Alliance at the demonstration on November 25th. Finally, we saw this again last October when it was announced that Alexandre Bissonnette, the Quebec City mosque shooter, would not be charged with terrorism. On top of this, the justice system is not immune to the racist prejudices prevalent in capitalist society. An attack involving a foreign killer or one whose name sounds foreign is systematically labelled as a terrorist, sometimes even before the details of the case are disclosed. But when one of “ours” attacks Muslims, no terrorism there! This double standard is enough to show that nothing can be expected from the establishment.

There is however, another side of the coin. If some people see the demagoguery of the far right as a solution to their problems, millions of workers and young people are seeking a solution to the left. While La Meute and their friends attract only a few hundred people, thousands protested in Montreal on November 12 against racism, in spite of the fact that the unions did not mobilize at all for this. Rather than simply a rise of the right, what we are witnessing is a polarization of society, to the left and to the right, a growing rejection of the entire establishment and a collapse of the political “centre.”

This polarization of Quebec society, which we also see elsewhere in the world, is a reflection of the crisis of the capitalist system at a world level. In every country, establishment politicians and traditional parties have been unable to improve the standard of living of people since the Great Recession of 2008. Quite the contrary: austerity measures have hit the working class and young people and nothing has been resolved. The result is a well-deserved rejection of the parties and politicians which have implemented these measures.

The rejection of the establishment is palpable in Quebec as well: the two main parties, the Liberals and the PQ, have never been so low in the polls. According to a recent Léger-L’État du Québec-L’actualité poll, 69% of Quebecers say that “Quebec is going badly and we need to make significant changes.” Also, 78% of Quebecers say that “things are the same as or worse than 10 years ago”!

This is why more and more people are rejecting the so-called political “centre,” in favour of solutions on the left and right. To stay in the race, parties like the PQ and the PLQ have no choice but to try to channel the anger of the masses one way or another, and the way they have found is to redirect it against immigrants and Muslims.

While the major parties are trying to steer the growing anger of workers and youth in Quebec against a minority of the population for electoral purposes and to divide the workers, we must seriously ask ourselves a question: what alternatives can we propose to these distractions of the establishment? Resisting the far right, and attempts to divide us, with mass action is a step forward, but it can only be a first step. A majority of Quebecers criticize the status quo and want change. But what kind of change is needed?

The right and far right understand that there is a crisis and demagogically blame minorities. They cannot be defeated by moderate policies, that is by proposing to maintain the status quo. We must respond by blaming the real people responsible for this misery, the capitalists. Ultimately, as long as capitalism exists, the need to divide workers with racism and the creation of scapegoats will also exist. What we need is a program that radically breaks with capitalism and the racist policies that accompany it.

All around the world, the ideas of socialism are back. There is no reason to think that Quebec is immune to the radicalization on the left that we see growing everywhere. According to the magazine L’Actualité which published the aforementioned poll, “[t]he political pot is boiling. […] Dissatisfaction is growing for men and for women, in all regions of Quebec, and all age groups.” Our task is to channel this anger, and direct it towards a socialist solution!