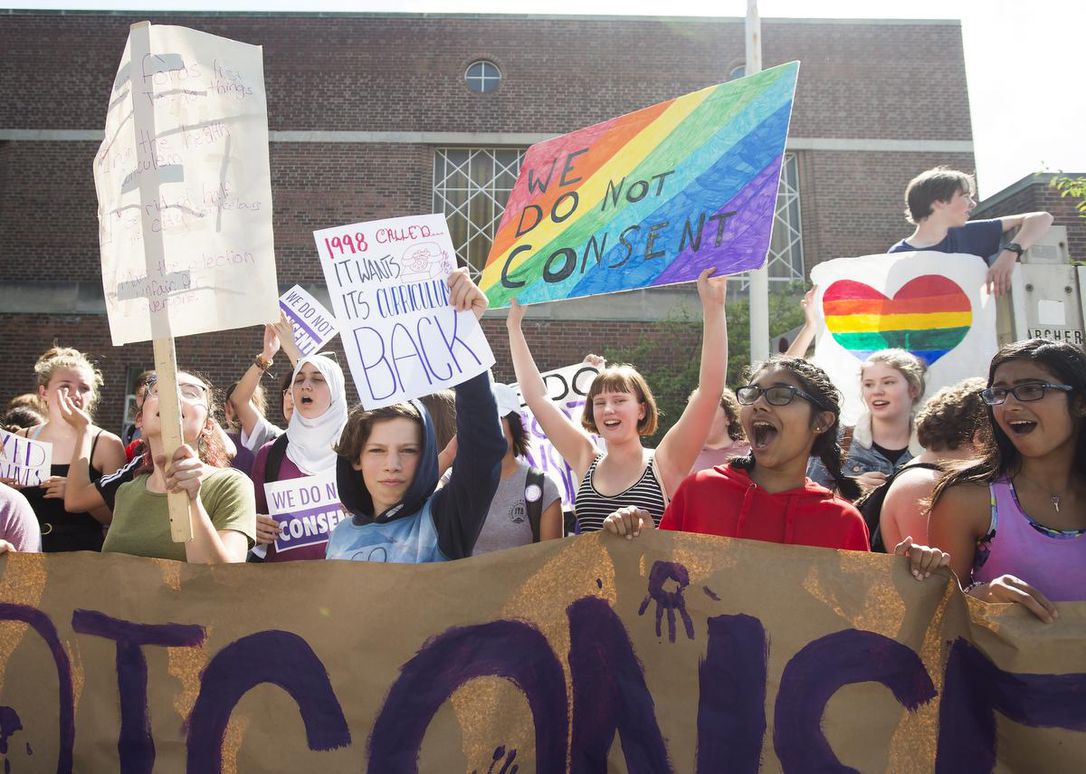 On Friday, Sept. 21, more than 38,000 high school students from at least 75 schools across Ontario walked out of classes in the largest such demonstration that Canada has ever seen. The walkout was staged over the Doug Ford government’s repeal of the 2015 sex-ed curriculum, as well as his rejection of the Truth and Reconciliation Commission’s recommendations regarding Indigenous education. In the wake of the curriculum repeal, schools will be forced to use the entirely inadequate 1998 curriculum, which omits topics such as consent, bullying, gender identity and sexual orientation, and the proper medical names of genitalia.

Many teachers, and even entire school boards, have refused to go back to the old curriculum. Ontario’s two largest teachers’ unions have condemned the move. There have been petitions and rallies against the repeal, as well as a human rights challenge. However, Friday’s walkout was the first of what could truly be called a mass action on this issue, and indeed the largest action that has been organized against Doug Ford since he came into office.

On the Sunday following the walkout, students held a demonstration at Queen’s Park, where Fightback activists were able to talk to them about their experiences. It became clear that the walkout provided students with a more valuable education than any that the Tories could imagine, both on the issues at hand, and on the power of solidarity.

“We had over 400 at our school, which was way more than we expected. We expected maybe 100 to show up,” said Victoria, who organized the walkout at her school and spoke at the demonstration on Sunday. “There were some that weren’t so supportive, so we did our best to educate students. We answered all of their questions, and we got 400 people—it was amazing. We made sure people had a space to ask us these questions, even if they thought they were dumb. We wanted to answer all of them.”

Victoria’s experience of her peers, of their willingness to stand together and learn from each other, was echoed by others. Tamara, who was an organizer at another school, said, “It was very energetic. Even though people didn’t understand at first what the walkout was about, by the end of it they learned a lot, and they felt it could extend their advocacy in different ways. I think a lot of people were inspired.”

While the goal of the walkout was for students to make their voices heard and take a stand against the government, that was not all that they accomplished. As Tamara said, “There was so much love, so many people felt like they were finally being represented, and they were proud of their fellow students that were standing up.” Ford may press ahead with the curriculum changes, but the solidarity and confidence that is built through protest is in itself an achievement that will carry over into future struggles.

Another student, Frank, said, “Everyone felt empowered. Some people have never felt this way before. They didn’t know that they have the power to go over the government’s head. I think that I feel a lot more confident right now because of that and because of this whole organization. I feel confident that we’ll be able to get through this and get kids the education that they deserve.”

Since coming to office, Doug Ford has attacked Ontarians on one front after another. Thus far, while there have been small rallies and a multitude of legal challenges, there has been no organized mass mobilization against Ford from either the left or the labour movement—and in the case of some leaders, such as OPSEU President Smokey Thomas, outright calls for passivity. However, the youth are showing the way, and labour leaders need to follow. Indygo Arscott, one of the lead organizers of the walkout, said, “We’re not looking for 15 minutes. We’re hoping that students, now that they know that their voices can have an impact, and that they are capable of these big things, I’m hoping that there’s going to be other days of action, other protests, other demonstrations.” Every opportunity exists to link up the struggle of students with that of the workers, and to extend mass actions across the province.

Indygo concluded her speech on Sunday by saying, “Our generation is going to be the one that saves the world.” As true as this may be, the current generation of workers need not let them go it alone.