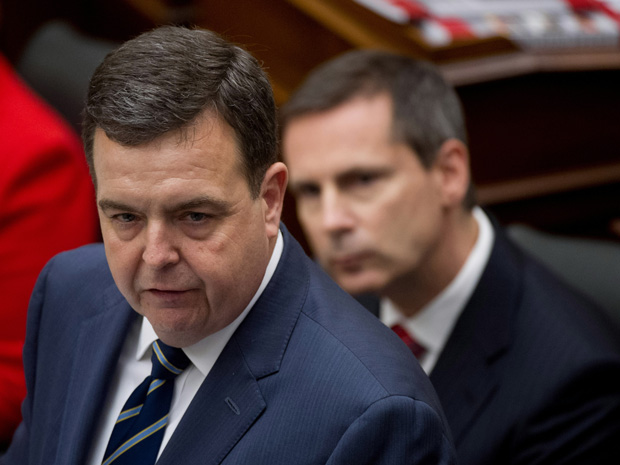 With the recent Ontario provincial budget, many of the illusions surrounding the Ontario Liberals have finally been dashed.  When it comes down to it, they serve the interests of Bay Street, not the interests of workers in the province.  Despite relying heavily on several unions to get themselves elected in the past three elections, Dalton McGuinty and the Liberals have turned their backs on their union support and have declared open class warfare.  Now, the main question has to be whether the Ontario NDP will give a lead to the province’s workers fighting austerity, or whether they will capitulate and support the Liberals in passing this bosses’ budget.

The backdrop to the budget was the Drummond Report, which we outlined in a previous article, “Dr. Drummond’s bad medicine: Top banker sees bleak capitalist future for Ontario”.  As we stated in that article, the financial situation in Ontario is very poor with little prospects of improvement “in the foreseeable future”.  According to Drummond’s own numbers, without serious cuts to the provincial budget, Ontario’s budget deficit is expected to reach $30-billion by 2018, and Ontario’s debt to reach nearly 100% of GDP in that timeframe.  In December, Moody’s, the leading international credit agency, threatened to downgrade the province’s credit rating if the government didn’t begin to tackle its financial crisis.  Drummond’s report put forward over 400 recommendations that aimed to fundamentally shift how the Ontario government would provide services in the future.

Although Dalton left many of Drummond’s recommendations on the table (at least, for now), he certainly did not ignore cuts to public-sector workers, and the full brunt of the austerity is going to have to be borne by them.

The most notable provision of this year’s budget is the government’s insistence in imposing wage freezes for Ontario’s 1.2-million public-sector workers.  In 2010, McGuinty and the Liberals put forward a two-year wage freeze for all non-unionized public employees, and “asked” unionized workers to respect the wage freeze, too.  However, the Liberals have accused labour arbitrators of ignoring the government’s wishes and continuing wage increases in negotiations with the public-sector unions.

Thus, in this year’s budget, the Liberals emphasized that they will achieve their target of a two-year wage freeze for the public sector, or else.  Finance minister Dwight Duncan stated, “Where agreements cannot be reached that are consistent with the government’s plan to balance the budget . . . we are prepared to propose necessary administrative and legislative measures to protect the public from service disruptions — and also to protect jobs for teachers, education staff, and health-care workers.”  The Liberals claim that this will be done “in good faith”, but they also leave no doubt that if the unions are not amenable to the government’s requests, they will legislate contracts and break up strikes to get their way.

The Ontario Liberals are headed down the same path as the federal Harper Tories — imposing contracts and taking away workers’ rights to collective bargaining and strikes, returning labour relations to the 1930s. These are fundamental democratic rights that were fought for long and hard by Ontario’s working class and which the Liberals hope to take away with the stroke of a pen!

And it isn’t just the usual suspects who are being targeted by the provincial government this time around.  Following from the Drummond Report, the province is demanding a wage freeze to Ontario’s doctors who are currently in contract negotiations with the province.  The Liberals are also bargaining hard with the province’s nurses and teachers, whose unions have been some of the Liberals’ strongest supporters since 2003.  Already, the union representing elementary school teachers has walked out of negotiations with the government.  One Globe and Mail columnist darkly warned McGuinty that once a government loses the Ontario teachers’ support, that it tends to mark the downfall of the government in power.

The Liberals also targeted public pensions, demanding that public-sector workers pay “their fair share” of pension costs.  The provincial budget would now push for workers to cover 50% of their pension costs; furthermore, in cases where pensions were underfunded, pension payouts would be reduced instead of the government helping to pay the missing balance.  Duncan announced, “When we address pensions, we are looking to make them affordable for taxpayers and sustainable for public sector workers….  We do not think it is fair to ask a single mother who earns $14 an hour and who has no pension plan to pay even more of her hard-earned tax dollars into the pension funds of others.”  What Duncan doesn’t say (and what makes his comment disgustingly hypocritical) is that it has been his government’s actions that have made pensions inaccessible for single mothers (and many others). As with wages, the government is threatening to legislate their pension plans if they cannot get it at the bargaining table.

The attacks on pensions and wages is in addition to the elimination of at least 1,000 public-sector jobs; a number of others would also be eliminated through retirement and attrition.  And this number is only the beginning; the job losses are expected to continue in future years.

The Liberals even attacked the poorest sectors in Ontario by freezing social assistance rates, which are still 55% below what they were in 1995 once inflation is factored in.

In fact, these “freezes” that the Liberals put forward are, in fact, cuts — significant ones, too.  Just this week, CBC News pointed out that Ontario and Quebec continue to lead Canada with the highest rates of inflation in the country.  Ontario’s rate sat at 2.9%, but that number is artificially deflated because of lower costs for consumer goods, especially electronics.  Inflation for food, electricity, and gasoline (which disproportionately affect working-class people) was over 4% for the sixth straight month in Ontario.

Even right-wing columnist Andrew Coyne had to question the wisdom of the Liberals’ budget.  In a column penned for the National Post, Coyne asked, “Is that what the province is in for? Five years of trench warfare with its own employees?”

What will the response from the NDP be?

This is the most blatant attack on working-class people put forward by the Ontario Liberal government in its eight-plus years of power, and that is really saying something.  (For an overview of the Liberals’ constant attacks on Ontario workers, check our “Ontario” archive on our website.)

The response by the NDP leadership should be one of complete condemnation of the Liberals’ austerity budget, but this is not what has come out from Ontario NDP leader Andrea Horwath so far.

In the last provincial election, the Liberals won a minority government, one seat short of a majority.  This means that Dalton and the Liberals need at least some support from either the NDP or the Tories at Queen’s Park to get the budget passed — otherwise, the government is defeated and a new election called.

Ontario Conservative leader Tim Hudak has already announced that the Tories will not support the budget, and that every Conservative MPP will be whipped to attend the budget votes.

Therefore, all of the pressure on whether the budget will pass or fail falls on the NDP.

In a letter to Dalton McGuinty prior to the presentation of the provincial budget, Andrea Horwath outlined three conditions that the NDP parliamentary caucus was demanding from the budget, but none of them cover the latest attacks on Ontario’s working class:

During the budget debate at Queen’s Park, the party posted a video of Horwath speaking towards these three points.  Again, there was no mention or criticism over the government’s planned attacks on public-sector workers or welfare recipients.

To be very frank, these demands are wholly insufficient.  Aside from the fact that the NDP leadership’s demands will have very little effect in ameliorating the day-to-day lives of working-class people, none of these demands criticize or get at the Liberals’ wholesale attack on labour in the province.

The NDP leadership has organized to collect feedback from ordinary party members on what the party’s response to the budget should be.  This, in of itself, is an abrogation of leadership, as they should know how to respond.  But, we encourage everyone to contact the party and let them know that workers and youth want no part of this budget.  The party brass has said that the response so far has largely been against an election, but we sincerely doubt that this is the case and ask them to release the numbers collected so far.

If the party’s parliamentary caucus sides with the Liberals’ austerity budget, then the entire NDP will be seen as part and parcel of the bosses’ attack on the working people of Ontario.  All of the memories of Rae Days and the Social Contract will come flooding back and once again alienate the NDP from workers and youth in this province who are looking for a way to fight capitalist austerity.  This will also erode the party’s current base of support; we only need to look at the federal Liberals and what happened to them after they continuously propped up Stephen Harper’s budgets over the past five years.

Already, labour leaders across Ontario have come out strongly against the budget.  Ontario Federation of Labour (OFL) president, Sid Ryan, has endorsed a resolution by the Toronto Young New Democrats calling for the NDP to not support Dalton’s budget.  CUPE Ontario president Fred Hahn, too, has come out vocally in opposition to the cuts and attacks.  It is time for the NDP leadership to join their brothers and sisters in the labour movement in condemning the Liberals’ budget, too.

The NDP establishment will say that no one in Ontario wants another election so soon after the last one.  We can say with certainty that there are many more Ontario workers that don’t want to have their wages cut, or their pensions threatened, or their jobs cut, all for the benefit of bankers on Bay Street and Wall Street.  If it came down to a choice between two austerity parties and one firm anti-austerity party, not only would these workers bear another election, they would vote for and get involved with an NDP that actively organized the fight back against austerity.

Thousands upon thousands of workers in Ontario and across the country — from Toronto municipal workers, to Air Canada workers, to Caterpillar workers, to US Steel workers — have risen up and tried to fight the austerity being thrust upon them.  The NDP needs to be their political voice at Queen’s Park and help to provide a lead.  We have already seen in Toronto the recent set-backs for Rob Ford how an organized and mobilized opposition from the streets can partially defeat the right-wing agenda.  This is what is needed across Ontario.

The NDP can have no part of this austerity budget!  There is no way the NDP can help aid in passing the Liberals’ budget, either through voting for it or by having their MPPs missing from Queen’s Park when the budget vote comes to pass.

As we have stated on numerous occasions, we have entered a new period and the old rules no longer apply.  To pay for the financial crisis, the ruling class wants to claw back everything won over the previous period.  Workers and youth will need to organize and mobilize to the fullest degree if we are going to be able to preserve our standard of living.  The NDP must be vociferous in opposing the Liberals’ austerity budget and help lead the fight back against Bay Street’s attacks on the workers and youth of Ontario.

No support for Dalton’s austerity budget!

Organize and lead the fight back against capitalist austerity!