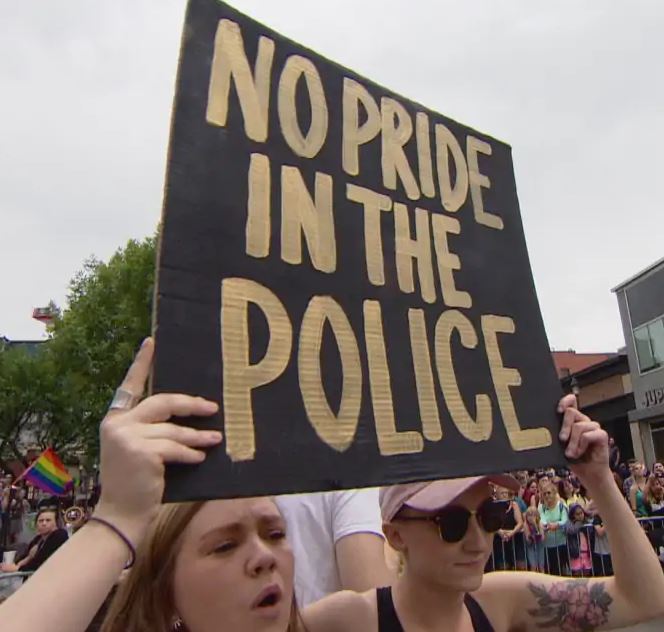 On the morning of Saturday, June 9, Edmonton’s Pride parade was brought to a halt after 30 to 40 protesters formed a blockade on the parade’s route. The protesters carried signs with messages such as “No pride on stolen land”, “Racism is a Queer issue” and “No pride for some of us without the liberation for all of us”. In a stunning show of civil disobedience, protesters then issued the following four demands:

When the protesters first came out there was a lot of confusion from the crowd. Some even thought it was a part of the parade itself. After about five minutes of speeches, people in the crowd began to understand what was happening and immediately started taking sides. Younger sections of the crowd started chanting slogans and cheering the protesters on. Other sections, comprised of a mix of young, middle-aged and older people, quickly became upset that the parade they and their children had come to see had been interrupted by these audacious protesters. 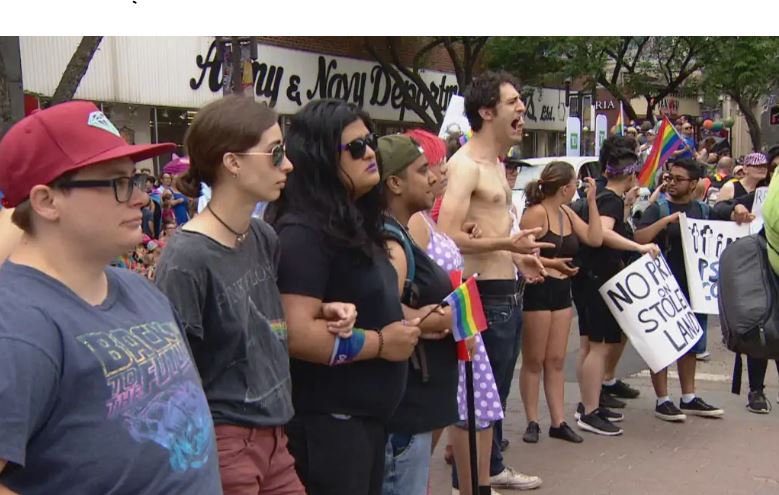 Tension and conflict reached new heights as members of the crowd started shouting at the protesters to move out of the way. Pro-police counter-protesters soon came in to challenge the protesters, and heated arguments erupted on both sides. One section of the counter-protesters formed a human chain and attempted to physically shove the protesters away, knocking down an elderly woman in the process. This continued until one of the protest organizers announced that negotiations with the Pride committee were being held. Someone started taking down the barricades so people could leave; however, their action only resulted in more confusion. Some members of the crowd started joining the counter-protesters in shoving the protesters to one side so people could leave. The protesters, unphased, began yelling “We will win!”, and indeed they did…for the moment. Soon after, all four demands were accepted by the Pride Society of Edmonton. However, the acceptance was not binding, and the Pride Society is not obliged to carry out the demands.

There are some who argue that excluding cops defeats the purpose of Pride being an inclusive event. However, there are many people from the LGBT community, particularly people of colour, who avoid Pride because of the presence of the police, RCMP, and military. How is it inclusive to ignore the concerns of these people in the community, but to allow the presence of state institutions which have historically oppressed us and still do to this day? When we compare the origins of Pride to what it is now, the event has become unrecognizable. Today, Pride has become not only a massive street party, but a giant advertisement for large corporations which have co-opted and sterilized the original meaning of Pride: to fight against state discrimination, police brutality, and the oppression of minority groups. The actions of these protesters are an important reminder of how Pride started, and also what it has become.

The fight is far from over. The liberal organizers of Pride have made a retreat to appease radical voices in the community, but there are no guarantees that they will keep their promises. This movement against police brutality now needs to continue beyond the June 9th action to ensure these promises are kept.

Importantly, the fight against police brutality must extend beyond the LGBTQ community and the Pride parade. It must spread to the broader working class and other oppressed groups that are targeted by the police. Only by extending the movement can we stomp out police brutality and tackle the rotten capitalist system that gives rise to discrimination.