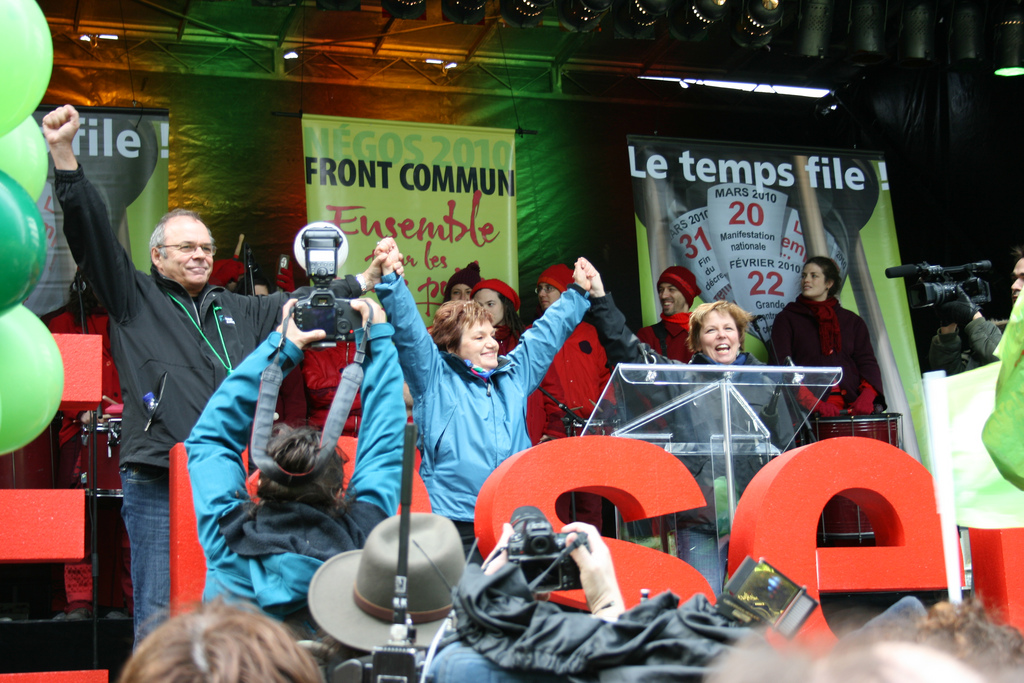 On Saturday 20th March, 75,000 workers from all over Quebec filled the streets of Montreal to show their strength, 10 days before the end of the collective agreement for nearly half a million Quebec public and para-public sector workers. For the Charest government, the end of the contract couldn’t come at a worse time, since it is faced with a $4.7 billion deficit for this year’s budget.

Having well over the 50,000 people that were projected by the Common Front leaders, the demonstration was by far the biggest that Quebec has seen since the massive student demos in 2005. It was at noon when workers from all over the province, and their families, congregated at Dorchester Square. At around 1pm, they marched to Premier Jean Charest’s office, where a stage was set for the union leaders to address the workers. The workers stood shoulder-to-shoulder all the way back to Saint Catherine Street, the main street in downtown Montreal, and were so numerous that the tail of the march was stuck a block away. The three leaders of the Common Front: Claudette Carbonneau of the Confédération des syndicats nationaux (CSN – the Quebec national union federation); Michel Arsenault of the Fédération des travailleurs et travailleuses du Québec (FTQ – linked with the Canada-wide CLC); and Dominique Verreault of the Secrétariat intersyndicale des services publics (SISP – organizing teachers and public sector workers), took turn addressing the crowd.

The mood was festive but beneath that was a seething anger and a readiness to fight. Martine Molière, a nurse present at the demonstration who works at Gatineau Hospital, said that the negotiations are certain to fail. “When the negotiations fail, we will go on strike. Everyone knows this,” she said.

The year-long negotiations between the public sector workers and the government have come to a deadlock: the workers are seeking a 11.25% wage increase over a three-year period while the government is offering a contemptible increase of 7% in workers’ wages and benefits over a five-year period. The negotiations started last year, when the three biggest union federations in Quebec – CSN, FTQ, and SISP – formed a Common Front that unites 475,000 out of the province’s total 550,000 public sector workers. This Common Front is even larger that the 1972 Common Front that brought together 210,000 public sector employees and shook Quebec society with a general strike of revolutionary proportions.

The 31st March will mark the expiry of the collective agreement for the public sector workers – but this was not a regular collective agreement. There was nothing collective nor agreeable in this contract; it was imposed in 2005 by the Charest government through the oppressive Bill 142 (Law C-43). The legislation imposed a two-year wage freeze and a meager wage increase of 2% for four years. It also brought about an end to pay equity, which was supposed to end gender discrimination by raising the wages of workers in predominately female job classifications. In addition, the most significant clause of the bill was the anti-strike provision. C-43 also stipulated punishment for any worker defying its provisions. Any striking public sector worker would face the loss of two day’s pay for every day off the job, and fines of up to $500. When this bill was passed, it was without any significant resistance from the unions. There is nothing more disheartening than a battle lost without a fight. The massive demoralization was evident when there was hardly any support coming from the public sector workers for the 60,000 students who went on strike in November of 2007 with one of their demands being the abolition of the law C-43. 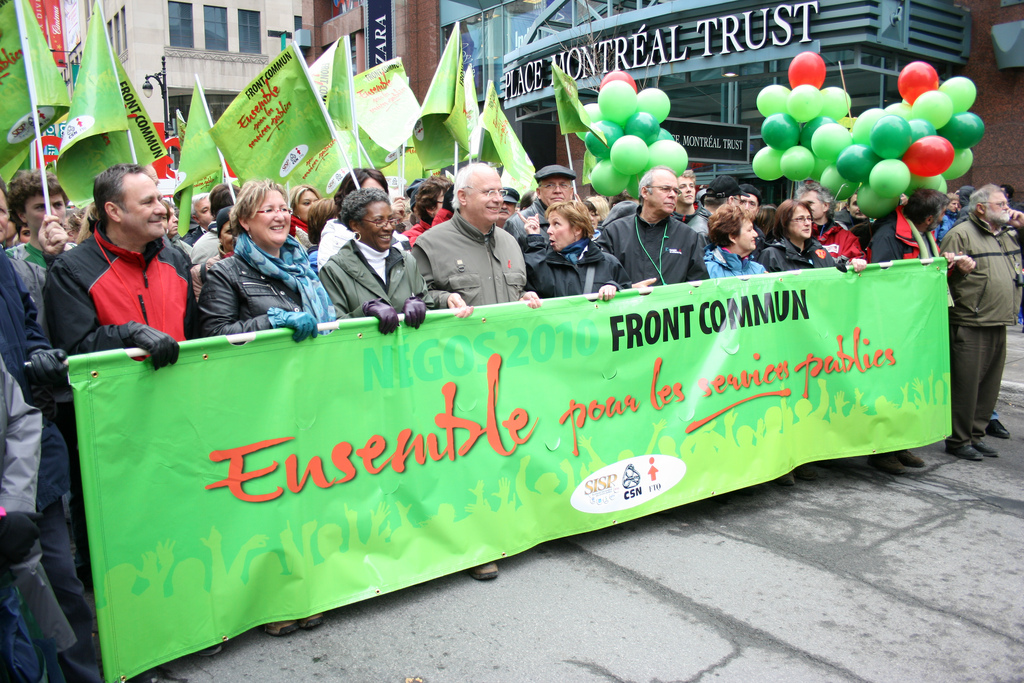 For five years, public sector workers have kept their head down. Now that the law is set to expire, they see that it is time to demand what is rightfully theirs. The workers have made a big sacrifice for five years; according to the government’s own Insititut de la Statistique du Québec (ISQ), public sector salaries have fallen behind the private sector. The ISQ reports that Quebec’s public sector salaries are 8.7% lower than the provincial average, including federal and municipal employees, and 6% lower than the private sector. However, the workers’ desire for payback, after the 5-year long imposed contract, is in direct contradiction with the crisis of capitalism. Quebec has a total debt of $285.6 billion, which is equal to 94.6% of the province’s GDP; only Japan, Italy, Greece, and Iceland have a larger debt-to-GDP ratio than Quebec. Hence, a showdown is imminent—one that can take many courses.

It is almost impossible for the government to accept the demands of the Common Front, both for financial and political reasons. The Quebec capitalists have initiated an ideological offensive against the working class over the last decade. From the 2003 Pour un Québec Lucide (“For a clear-eyed vision of Quebec”) to the recent call by Quebec’s finance minister, Raymond Bachand, for a “cultural revolution”, the government plans to force workers to accept cuts in order to pay for the crisis. Any concession given to the workers will signify a retreat and thus a political defeat that might embolden the people. While the majority of the workers have long forgotten the 1972 Common Front, the bourgeoisie still remembers it clearly as it was the time when power briefly slipped out of their hands. The capitalists rightly fear that a Common Front victory, even a meager one, can evoke the collective memory of the working class back to the lessons of 1972. Therefore, in this struggle, neither side can afford to lose.

In addition to fighting on the industrial plane, workers also need a political expression in order to defeat the government. With a stroke of a pen, the government can roll back all hard fought gains, as shown by the draconian Bill 142 in 2005. Quebec workers need their own political party that can give it an organized political expression. The Parti Québécois (PQ) has proven itself to be nothing more than a bourgeois party. In relation to the Common Front, PQ leader Pauline Marois warned that the public sector workers may be getting carried away with their demands and said, “at first blush, [the demands] appear a big high.” In this decisive showdown, the PQ has clearly taken the side of the bosses. They even expelled the pro-union SPQ-Libre over this issue and it is only a matter of time before everybody gains a clear-eyed view of the class character of the PQ. The only party that has fully supported the Common Front since its inception is Quebec solidaire (QS). QS has supported the Common Front and the party needs to follow this up with a clear perspective to transform itself into the worker’s party of Quebec. They must do so firstly by adopting a working class socialist program and secondly by doing serious ground work to win the organized workers to their ranks. Similarly, the leaders of the Common Front unions, the CSN, FTQ and SISP, must realize that all other political parties are opposed to them. The unions should formally affiliate to QS and transform it into a workers party – this unity in struggle is the way for the workers to win victory on the picket lines and at the ballot box.

A resolute leadership is needed here more than ever. In the face of the biggest crisis of capitalism, simple economic demands that only lead to capitulation no longer suffice. The reason why Quebec capitalism has such a huge deficit is because of the corporate welfare and massive bailouts given to the big banks and corporations. In other words, the government is saving the capitalists, who ruined the economy, at the expense of the workers. Thus, if they seriously intend to protect workers, the unions and their leadership must be ready to politically challenge capitalism head on. The unions need to prepare now to defy a new enforced contract like C-43, and the rank-and-file of these unions need to keep their leaders accountable so there is not a repeat of the demoralizing capitulation of 2005. The 475,000 public sector workers united in the Common Front not only have the responsibility to themselves, but also to the whole of Quebec’s working class. Their victory can give a lead to other workers and can clear the confusion that has been created by the economic recession of 2009. Victory to the Common Front!