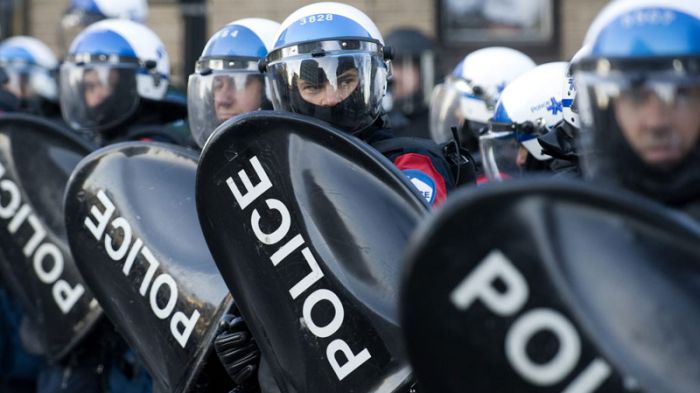 Over the past two weeks, the student strike in Quebec has entered a new stage. What originally began as a strike against a 75% increase in tuition fees has rapidly progressed into a movement against the Liberal government itself. Premier Jean Charest’s government has clumsily fallen over itself, trying to suppress or divide the movement, with little success. Instead of killing the movement, every action by the government has only given the movement new life.

Last week, Quebec education minister Line Beauchamp was compelled to resign after the students rejected the government’s offer by a massive margin. The strike has moved beyond being simply about money — it has now fundamentally become a movement centred on power, and who wields it.

On Thursday (17th May), the Charest government tabled Bill 78, and forced an overnight session in Quebec’s National Assembly in order to have it passed into law by the following day. Bill 78 effectively eliminates the right of protest in Quebec. The law prohibits groups of more than 50 people from congregating without police approval, and makes student union fees non-compulsory — a clear attempt to destroy the student unions. It also places restrictions upon the right of education employees to strike.

The government has also imposed draconian fines in order to enforce this law; individual strikers can be fined $5,000, “leaders” can be fined $35,000, and labour and student unions can be fined $125,000 if they are deemed to be “in charge” of a demonstration. Furthermore, this law would be on the books until July 1, 2013. This is very clearly one of the greatest suppression of democratic rights in Canadian history.

The student strike is now entering its 14th week and shows no sign of weakening in the immediate future, despite the Quebec state’s vicious repression. As of the time of this article’s writing, we have witnessed 28 consecutive nightly mass marches in Montreal, which have drawn out thousands of demonstrators on each occasion. The students have successfully disrupted the daily running of  Quebec society and beaten back the government’s injunctions against striking students throughout the province’s colleges and universities. The US State Department has even been forced to issue a travel advisory, warning US tourists to avoid travelling to Montreal! The students scored a significant victory with Line Beauchamp’s resignation; a visibly drained Beauchamp not only resigned her ministerial post, but resigned from politics completely, thereby reducing the Liberals’ majority in the National Assembly to just one seat.

Despite the movement’s militancy and determination, the Quebec government has demonstrated unprecedented stubbornness. Aside from legislative manoeuvres such as Bill 78, the Quebec state has taken the adage of “cracking skulls” to a literal new level. At least four students have already lost their vision from police attacks. Students, teachers, and workers are routinely pepper-sprayed, tear-gassed, and CS-gassed. Scores of people have been seriously injured by repeatedly being fired upon with plastic bullets from the police. After Bill 78 brought out tens of thousands this past weekend, the police caused a scene of chaos in Montreal’s trendy St-Denis neighbourhood, attacking not just strikers but standers-by as well. One cop pepper-sprayed diners on a terrace, while another threw a tear gas canister into a packed restaurant.

This brutal attack on democratic rights is having the effect of radicalizing an entire sector of Quebec society. Quebec today has more in common with Egypt than the traditional notion of “sleepy Canada”.

The outrage is clearly spreading to the rest of the population as the workers are starting to realize that the state’s repression is going to apply to them, as well as students. There has been unanimous denouncement of this law from the trade union and student union leaders. CSN [Confédération des syndicats nationaux] leader Louis Roy called this law a “completely pitiful law, written by impotent uncles.” At their most recent congress, public-sector workers in the CSN (which number around 55,000) voted for unlimited strike action, commencing on 22nd May. The CSN is also organizing to come out for the mass protest planned on 22nd May, the 100th day of the Quebec student strike. Lawyers and law experts have also been unanimous in their denunciation of Bill 78. The law is a clear affront to the Charter of Rights and Freedoms, enshrined in the Canadian constitution. The fact that the law has an expiry date is certainly because there is no chance that it will ever hold up in court.

The amount of money spent on policing during this conflict has now far surpassed the amount of money the government would have received from the tuition increase. Furthermore, by suspending the school semester at 34 colleges and 11 universities, these schools have an added financial pressure as their semesters are scheduled to resume immediately before the next semester is to begin. It is very clear that the strike is no longer about money, but about power. The government feels that it has to win this struggle, regardless of the financial cost.

The tuition hikes are only one part of the general austerity that the Quebec government needs to force upon the Quebec working class. If the students beat back the tuition increases, this would send a very dangerous message (in the government’s eyes) to the rest of Quebec society — that capitalist austerity can be fought. Even the brutality of the police repression has its own rationale — this is what Quebeckers (particularly unionized workers) can expect if they dare to defy the government and bosses.

On the other hand, there is a more far-sighted and intelligent segment of the ruling class which actually wants to see the Charest government reach a deal with the student movement and have the movement end. This is especially the case with the ruling class outside of Quebec, in the rest of Canada, who realize that the movement has moved beyond being one simply opposed to tuition fee hikes, and is now questioning the entire austerity program that the bosses and bankers have in store. Furthermore, they are passionately afraid of this movement spreading beyond Quebec’s borders. They ask themselves, “Is it worth jeopardizing everything for a $1,625-increase in tuition fees?” This contradiction is very much at the heart of the capitalist austerity worldwide, and shows the real weakness of the ruling class.

The Charest government is in actuality in a very weak position. Bill 78 is extremely unpopular and is causing the student outrage to spread further into the working class. The Quebec nurses’ union recently issued a press release which linked Bill 78 to Bill 72, the law passed by the PQ government of Lucien Bouchard which took away the right-to-strike from 60,000 Quebec nurses in 1999. (Ironically, Jean Charest was then the leader of the Opposition and had claimed that Bouchard was “out of touch with reality”!) Other workers will realize the similarities between Charest’s attacks on students, and his attacks on public-sector workers in 2007, when the Liberals passed legislation that essentially banned public-sector strikes in the province. There are also the more recent examples, federally, with Canada Post and Air Canada workers having their labour rights taken away by the federal government.

The Quebec student strike is no longer simply about tuition fees; it is now a question of who wields real power in society. The working class must exercise their power on the side of the students in order to sweep this draconian law aside, and beat back the austerity of the Quebec government. The initiative of the public sector workers of the CSN is one that other unions must follow. More than ever, the students need to organize delegations to go to the workplaces and enter into discussion with the workers and explain the need for student-worker solidarity. This law is an attack on us all.

For the abolition of all anti-democratic laws!

Bring the workers into the struggle! For a 24-hour general strike!