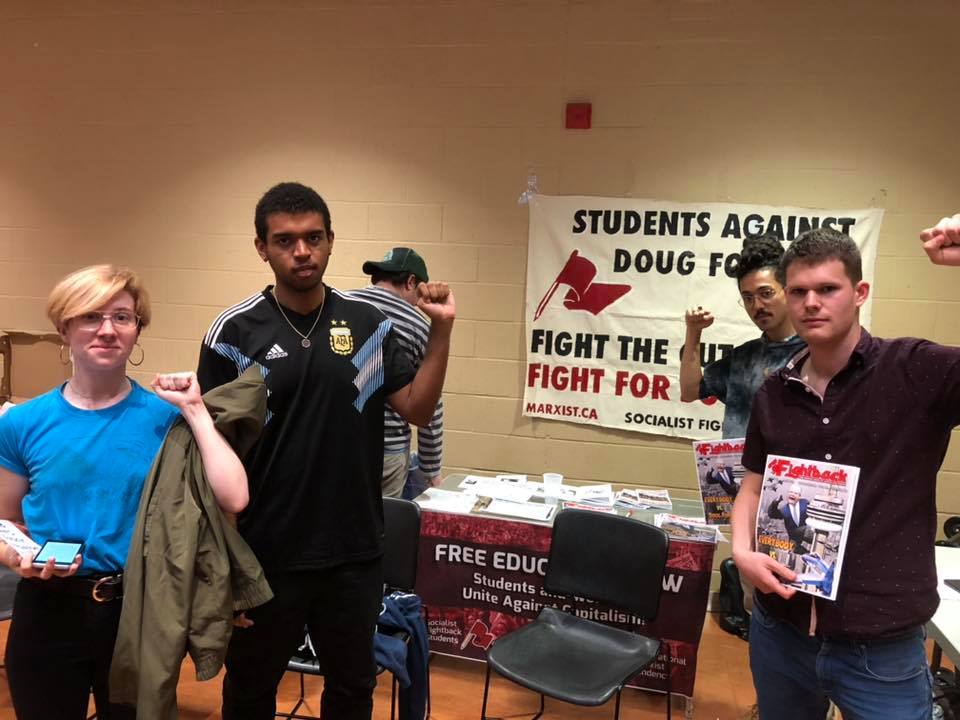 On April 23, students present at the annual general meeting of the Ryerson Student Union (RSU) unanimously voted to adopt a strike resolution (full text below) tabled by Socialist Fightback at Ryerson. After the last few months of unprecedented mobilizations by students, the overwhelming support for the strike resolution is further proof that there is an enormous movement brewing against the Ford government and its austerity agenda.

The resolution raised two key demands: the need for escalating student actions against the provincial government by calling for a one-day student strike in September, as well as the need for general assemblies to democratically organise the student strike.

Socialist Fightback at Ryerson activist Hermes Azam spoke first to motivate the resolution. He began by drawing a link between the economic crisis of capitalism and the austerity cuts being implemented by the Conservative government. Azam also explained that Ford’s cuts aren’t being directed at post-secondary students alone, but at every group of people, from kindergarten students to pensioners. Azam used this point to highlight that if the students were to take strike action against the government, they would be met with overwhelming public support.

Last month, more than 1,000 Ryerson students mobilised on campus for a walkout against the education cuts, making it the largest demonstration on campus in recent memory. Despite this energetic opposition to Doug Ford and the cuts to education, Azam pointed out that a one-day walkout won’t be enough to scare the Ford government into submission. To do so would require escalating actions, starting with one-day student strikes in the fall semester. Finally, Azam drew attention to the heroic struggles of the Quebec students who in 2012 battled dramatic tuition fee hikes through strike action, bringing down the provincial government in the process. The lessons of 2012 are vital for the student movement in Ontario to learn from.

After the initial motivation by Azam, another student raised the point that the Canadian Federation of Students (CFS) had already voted in favour of a strike in September. This is not entirely true. In January, shortly after the education cuts were announced, the Semi-Annual General Meeting of the CFS passed a motion to develop a plan for an Ontario student strike. Fightback released an article at the time analysing this development. The CFS resolution indicates that a “draft plan” for strike action will be developed in the coming months, but that it will not be voted on until the summer of 2019. We welcomed this development as a positive departure from the years of lobbying which have occupied the CFS previously, but also stressed the need for immediate and concrete action to build momentum and rally students for strike action in the coming months.

Mitch Thompson, another student activist with Socialist Fightback at Ryerson present at the April 23 AGM, tactfully dealt with this point raised about the CFS. Thompson welcomed the CFS resolution for a student strike. However, he also explained that students have not yet been made aware of the decision. It is for this reason that the strike resolution put forward by Socialist Fightback at Ryerson gives the student strike a real timeline by calling for a one-day strike in September. In passing our resolution, not only was the fighting mood of the students present at the AGM made clear, but also the fact that students are looking for concrete steps to escalate the struggle against Ford.

Thompson ended by alluding to the militant action taken by the student movement in the 1990s in their struggle against provincial and federal government cuts to education. He reminded the room that the students back then went on the offensive and inspired other sections of society to join the struggle. Thimpson said it could be done again with a far higher chance of success given the collapsing support for Ford.

Unlike some others left groups on the campuses, Socialist Fightback activists used this opportunity at the RSU’s AGM to put forward positive demands on the CFS. Furthermore, we used our opportunity at the microphone to share with students the best methods to fight back against austerity: socialist and class struggle methods. In doing so, we were able to win the overwhelming support of the room, introduce socialism to those as of yet unacquainted with these ideas, and ensure that the RSU be given a concrete mandate to organise a student strike against Ford’s cuts to education.

We hope students across the province find the lessons from Ryerson useful in their own struggles within their own student unions. From our experiences over the last few months, we have come to understand that this militant mood isn’t exclusive to Ryerson, but is shared across the province. With that desire and willingness to fight in mind, we expect similar pro-strike votes on other campuses.

If we do the necessary work on the campuses now, come the fall semester, students will be ready to be the spark to set off the mass movement that will be capable of bringing down Doug Ford.

Whereas the Ford government has announced a reduction in post-secondary student grants, thus dramatically increasing the cost of education for primarily low income students

Whereas the Ford government has also announced the abolition of the six-month interest-free period on student loans, thus making it more difficult for students to pay off their debt

Whereas the Ford government has created the “Student Choice Initiative,” which is a veiled attempt to undermine student unions and weaken his opposition on campus

Whereas the Ford government’s policy will also lead to a reduction in university and college revenue, thus resulting in a reduction of services and layoffs of campus workers

Whereas a one-day walkout involving thousands of students was held on March 20 against these aforementioned policies, demonstrating that students are eager to fight back

Be it resolved that the RSU also call on the Canadian Federation of Students-Ontario to organize general assemblies, where each student receives one vote, in the lead up to a one-day strike

Be it resolved that the RSU also commit to organizing its own one-day strike in September, as well as one or multiple general assemblies in order to prepare Ryerson students