On December 11, the day after Parliament broke for Christmas holidays, Canada Post’s management announced that they plan to end home mail delivery.  The bombshell announcement came as a complete shock to many.  While Conservative MPs maintain that this decision was made solely by the Crown corporation without input from the government, this explanation is believed by no one.  Tory MPs were quick to fall back on the government line that these cuts were necessary to ensure the future viability of Canada Post. In fact, they are likely designed to do the precise opposite — to prepare for the break-up and privatization of the Crown corporation, and the destruction of the Canadian Union of Postal Workers (CUPW).

The five-point plan released by Canada Post management includes unprecedented increases in postage rates, the elimination of door-to-door delivery, and the elimination of 8,000 jobs. Under this new plan, citizens will be forced to pick up their own mail at community mail boxes dispersed throughout their neighbourhoods. The cost of a single stamp will jump from 63 cents to one dollar. At a special meeting of the Transport Committee on Parliament Hill, Deepak Chopra, the CEO of Canada Post, was questioned about the difficulty this would pose for senior citizens and the disabled.  Chopra’s reply was that they would appreciate the exercise.  This blatant disregard for the well-being of the vulnerable and the wishes of the general public has been met with a firestorm of criticism.

Spontaneous actions of postal workers have broken out across the country.  At least a dozen MP offices have been occupied by postal workers.  Work-floor meetings are being held everywhere.  Town-hall meetings are being organized by NDP MPs.  Postal workers are knocking on doors in Conservative ridings and getting people to sign petitions at farmers’ markets and shopping malls. The Tories did not expect such a backlash.  The Conservatives hoped that by announcing these cuts just before Christmas they could avoid opposition questions in the House of Commons and take advantage of a general public distracted by the holidays.  Instead, the cuts at Canada Post became a major topic of conversation at every family dinner table.  Mishandled from the very beginning, this attack against critical public services threatens to become the main focal point of the class struggle in Canada over the next period.

Until recently, the mainstream media has essentially parroted Canada Post management’s talking points without question.  Canada Post and Conservative Party spokesmen have painted a picture of a crown corporation in crisis, hemorrhaging money that poor taxpayers would be on the hook for.  Finally, the truth is starting to emerge even in the corporate press and this narrative is beginning to crumble.  The simple reality is that Canada Post has made a profit in 17 of the last 18 years.  The only year in which Canada Post lost money was 2011, the year they locked-out their employees and had to settle an unrelated lawsuit in excess of $200-million.  Canada Post has actually returned hundreds of millions of dollars to the public purse in the form of taxes and profits.  The hypocrisy of these people is glaring.  During this so-called “crisis” Deepak Chopra and his 22 vice-presidents have continued to collect millions of dollars in bonuses.  If their job is to help the corporation succeed, by their own statements they should have their bonuses cut.  It appears that their real directive, coming from the Harper Conservatives, is to run the corporation into the ground — for which they are being handsomely rewarded.

Canada Post management and the Conservatives have been spreading the scary figure of a $6-billion deficit in the corporation’s pension plan. This deficit is a statistical test based on what would happen if Canada Post no longer existed — something that the government is denying will happen. If there is a deficit the responsibility lies entirely on management.  Pensions are deferred wages and all workers deserve to have a respectful existence in retirement.  Therefore, any unpaid pensions are, in effect, the theft of workers’ wages. If the capitalist system, through underfunding or poor stock returns, cannot afford to fund decent pensions then we need to build a socialist society that can respect its elders. If there is enough wealth in society for Bay Street to get over $10-billion in bonuses every year, then there is enough wealth for all workers, including those at Canada Post, to have decent pensions.

Over the last several years Canada Post has spent over two billion dollars on a modernization plan that centres around machinery to sort letters — the very business they claim is disappearing.  In reality, the gradual decrease of letter mail has been widely overstated.  While it is true that, on the one hand, the Internet reduces the need for people to send private letters, online shopping has massively increased parcel shipments. In fact, there are reports that management was not prepared for the increase in parcel mail this past Christmas and did not hire enough workers to meet demand. A management that actually wanted to sustain and grow the service would adapt to this technological change. Instead, they would rather destroy the service, destroy decent jobs, and pass the profits on to their friends in the private sector.

Canada Post management has completely refused to consider any ideas to expand services for the public and bring in new revenue. The Canadian Union of Postal Workers has been campaigning for some time on the need to establish postal banking in Canada.  A public sector bank that utilizes the postal infrastructure could provide cheap accessible banking to the population underserved by the big banks while generating public revenue. Such state-capitalist methods are obviously not a panacea, but the refusal of the Conservatives to consider them on ideological grounds shows that they really want to destroy the service. 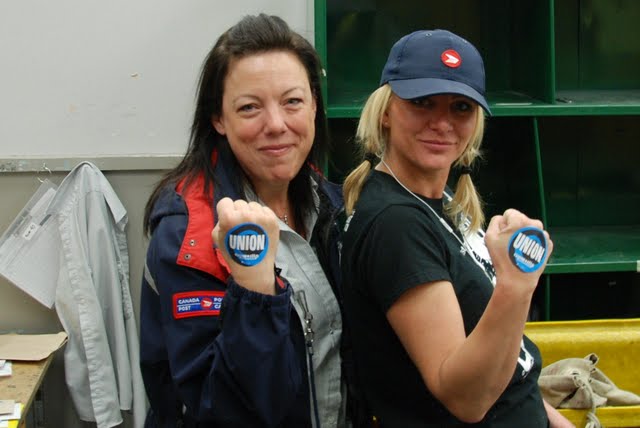 Management and the Conservatives have made no attempt to solve the problems in Canada Post. It doesn’t take a degree in economics to understand that raising prices and reducing service is not a successful business strategy.  The truth of the situation is that the Conservative government and their lackeys on the board of directors at Canada Post have no interest in maintaining the postal service.  These people do not care about the service this Crown corporation provides, and they are blinded by hatred of the postal workers’ union that has played a militant role in Canadian labour history.

A publicly-owned post office and a strong union is a real impediment to the attacks and austerity against the Canadian working class.  Canada Post plays a valuable role of providing public competition to FedEx, UPS, and other parcel companies.  This helps keep shipping rates affordable.  The parcel industry is booming as more and more people do their shopping online.  Breaking up Canada Post, or driving it into the ground, would be a gift to these corporations.  What would be a bigger gift would be the weakening of CUPW as an example of militancy for the rest of the labour movement.  CUPW was instrumental in winning the right to strike for public-sector workers, as well as maternity/parental leave (despite being a majority male workforce).  This struggle to save Canada Post is reminiscent of the fight between British Prime Minister Margaret Thatcher and the miners back in the 1980s.  Britain had cheap accessible power on the basis of the coal industry, but Thatcher and the British ruling class were willing to throw this all away in order to destroy the National Union of Mineworkers (NUM).  The NUM played a key role in bringing down the Tory government in 1974 so the miners had to be destroyed no matter what the cost.  Unfortunately, Thatcher succeeded due to the inability of the British labour movement to unite behind the miners and take the necessary solidarity action.  This prepared the ground for a series of defeats for the British workers.  The Canadian working class cannot afford for CUPW to face the same fate.

Canada Post has a massive infrastructure and the private sector is salivating at the prospect of getting their hands on it.  The Crown corporation is both the largest distribution and largest retail network in the country.  The crisis that is being manufactured at Canada Post — the drastic cuts in service, the dramatic price increases — are all an attempt to prepare the privatization of this profitable crown corporation. However, there is no guarantee that the Conservatives will succeed in their plan do destroy Canada Post. What the Conservatives hadn’t counted on was the massive public backlash they have received since this announcement. The growing anger against these cuts is starting to worry a government that is tanking in the polls.  Seniors’ organizations, municipalities, and organizations for people with disabilities are all starting to speak out against these cuts.  It would appear that Stephen Harper has made a rare, yet critical, political miscalculation.

It is vital that the entire labour movement, the NDP, Quebec Solidaire, and all organizations that represent workers and youth, recognize this attack for what it is. An injury to one is an injury to all. A mass movement needs to be built, with the labour movement playing a lead role, in mobilizing the population against this attack. Demonstrations, occupations, and militant solidarity actions need to be organized.

There are many in the leadership of the labour movement who believe that by accepting the austerity that is being pushed by employers everywhere, they can somehow mitigate the damage or satisfy the demands of the bosses and their government.  In fact, an entire decade of concessions at bargaining tables across the country has demonstrated the opposite to be true.  Weakness invites aggression.  Some thought that the massive cuts accepted by CUPW in 2012 would keep Stephen Harper at bay until after the next election.  Now, we see that such retreats only embolden the employers and prepare the way for new attacks.  With most of the federal public sector heading to the bargaining table this year, the stakes couldn’t be higher for public sector workers and public services.

For years, workers, students, seniors, and all manner of citizens have been told that they have to accept less for more.  They have been told to sacrifice their public services for the good of the economy.  They have been told that their wages, benefits, retirement plans and social programs can no longer be maintained.  And they have had enough.  Cuts at Canada Post may well become the symbol of Stephen Harper’s austerity.  The anger and discontent that has built up within Canadian society is like a powder keg, and postal workers will be more than happy to carry the torch that sets it off.

Alex Grant is the editor of Fightback magazine — www.marxist.ca