Two years after the Israeli ‘Defence’ Forces indiscriminately slaughtered over a thousand Lebanese civilians in the quaintly-titled Operation Just Reward, Israel has turned its attention to Gaza, in the form of Operation Cast Lead. Stripped of its innocuous-sounding name, this operation becomes a lot less palatable: according to Palestinian medical sources, nearly 300 Palestinians have been killed, including numerous women and children. Israel’s targets have included police stations (which are unsurprisingly situated in densely-populated areas), the headquarters of a Hamas-owned satellite television channel, and the Islamic University, Gaza’s only higher education institution.

According to witnesses, hospitals are overwhelmed with the injured and the bodies of the dead are piling up in the morgues. BBC correspondent and Gaza resident Hamada Abu Qammar describes a typical grisly scene:

“I followed one woman who was screaming ‘my son, my son’ as she searched the building.

Eventually they located him, a young man was in his twenties. The staff would not let her see the body, but I saw it. It didn’t have a head and there was no stomach. She fainted on top of the remains of her son, which were covered with a white sheet.”

Israel’s ‘ceasefire’ and the complicity of the Arab world

The attacks have come as a six-month ceasefire between Israel and Hamas elapsed. However, even when this ceasefire was in place, this did not mean the people of Gaza were free of problems. Israel has instigated a crippling blockade of Gaza that has starved its people of food, fuel and even medical supplies. As John Ging, head of operations of the United Nations agency for Palestine refugees (UNRWA), said in an interview with The Electronic Intifada in November, “there was five months of a ceasefire in the last couple of months, where the people of Gaza did not benefit; they did not have any restoration of a dignified existence. We in fact at the UN, our supplies were also restricted during the period of the ceasefire, to the point where we were left in a very vulnerable and precarious position and with a few days of closure we ran out of food.”

Nor should Israel alone be held responsible. Whilst Israel was instigating these brutal attacks, Egypt was playing host to Israeli foreign minister Tzipi Livni. According to the BBC, “[a]s jets pounded the southern Gaza Strip, hundreds of Palestinians stormed over a fence on the Gaza-Egypt border, but Egyptian security forces fired shots to prevent them entering.”. In fact, Egypt has consistently participated in the blockade of Gaza, time and again doing Israel’s dirty work, caging Palestinians like animals and denying them essential supplies. Arab states called for an ‘emergency’ session of the Arab League, but Egypt opposed this and Saudi Arabia expressed ‘reservations’.

Why has Egypt done this? Well, firstly, as the world’s second largest recipient of US military aid (no prizes for guessing the first largest), Egypt is a ‘key regional ally’ (i.e. pawn) of the United States, and as such, will carry out US policy. Writing in Haaretz, the liberal Israeli newspaper, Zvi Barel argues that “Egypt and Saudi Arabia, which view Hamas as an Iranian ally whose goal is to increase Tehran’s regional influence at their expense, prefer to wait a bit in the hopes that Israel’s military operation will strip Hamas of its ability to dictate terms.” In other words, the Egyptian and Saudi regimes (and their US puppet-masters) are hoping Israel succeeds in destroying the Hamas government and replacing it with something more pliant. They are prepared to see Gaza’s streets drenched with Palestinian blood to make this happen.

Of course, the pusillanimous collaboration by the Arab states has not been matched by its people. In Egypt and Lebanon, rallies of tens of thousands have taken place in support of the Palestinians. Large rallies have also taken place in Syria, Libya, Iraq and Jordan. Revulsion at the complicity of the Arab states was evident: left-wing Lebanese television station Aljadeed (New TV) showed demonstrators outside the Egyptian embassy, some waving red flags and one sporting a Ché Guevara t-shirt. 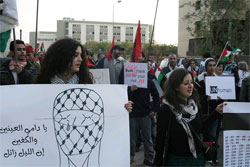 Even in Israel itself, where the population is subjected to a relentless propaganda machine in support of the state, a rally of over a thousand people assembled spontaneously in Tel-Aviv, attended by organisations from “Gush shalom and the Women’s Coalition for Peace to the Anarchists Against the Wall and Hadash [with whom the Israeli Communist Party are involved]”.

A demonstration also took place in London outside the Israeli embassy. According to police reports, 700 people attended the stormy demonstration, blockading the road outside the embassy and bringing traffic to a standstill. Clashes between protesters and the police broke out when a group of protesters tried to storm the barrier that was penning them in.

The futility of terrorism and the bankruptcy of the fundamentalists

So what is Hamas, the supposed leader of Palestinian resistance to Israel, doing to defend the Palestinians? Unfortunately, their ‘resistance’ strategy is based on futile terrorist attacks on Israeli civilian targets. Since taking control of Gaza, the Islamic movement has fired hundreds of homemade rockets at the Israeli border town of Sderot. Whilst these attacks have rarely been deadly (less than 20 Israelis have been killed in such attacks since Israel removed its settlers from Gaza), they have made life miserable for the inhabitants of this poor, working-class town.

These attacks do nothing to militarily damage the regional superpower; they do however serve to harden Israeli public opinion, particularly amongst the poor workers of Sderot, who should be the Palestinians’ natural allies. Such attacks help to create a fortress mentality within Israel, encouraging its workers and poor (themselves heavily exploited by Israeli capitalism) to support ‘their’ state in its attacks against ‘the enemy’. The Israeli military can then take advantage of favourable Israeli public opinion to launch an attack. Its aim is to destroy or severely weaken Hamas, and see it replaced by something more pliant.

For its part, Hamas is primarily interested in gaining power over its own stretch of territory. The terrorist attacks on Israel are aimed at strengthening its position at the negotiating table; Hamas has already shown its willingness to accede to Israel’s demands (even going so far as to aid the Egyptian security forces in preventing Palestinians from entering Egypt via Gaza), but its support base forces it to drive a harder bargain than Fatah. This is a problem for Israel, whose dominant economic and political position will be threatened if it concedes too much.

Is there an alternative?

If Hamas were serious about organising a resistance against Israel’s occupation, it would base its strategy not on futile acts of terrorism by small bands of ‘heroes’, but on arming the Palestinian masses. It would organise regional defence committees in every city, town and village, democratically controlled by the workers, peasants and refugees, and composed of every able-bodied man and woman. Such a force would have a genuine mass base, and, conducting a campaign of guerrilla street-fighting, would be a formidable foe for the Israeli occupation forces. But such a force would threaten the power of Hamas (and of the powerful, semi-feudal clans that dominate Palestinian politics). One of Hamas’ first actions upon taking control of Gaza was to raid the offices of the Palestinian Trade Union Federation, in an attempt to stifle any independent organisation of Palestinian workers.

For its part, the Israeli labour movement has a moral duty to oppose Israel’s barbarous actions. The Histadrut (Israeli Trade Union Federation) should refuse to cooperate with the ‘war effort’, calling strikes amongst workers involved in the handling of military supplies, and, if necessary, an anti-war general strike. The workers and poor of Israel are the natural allies of the Palestinian masses of Gaza and elsewhere. This war will not benefit them – it will mean more curtailing of civil liberties by the state (Israeli police already have unprecedented powers to search people’s homes without even informing them), more cuts in public spending, and more threats of terrorism as Hamas or Hezbollah retaliate.

Of course, we are under no illusions that the Israeli labour movement is about to take such actions – even more than in Britain, Israeli trade union leaders are very much integrated into the state machine. But some rank-and-file members, Israeli workers, will start to ask awkward questions at union meetings, demanding that their leaders take action.