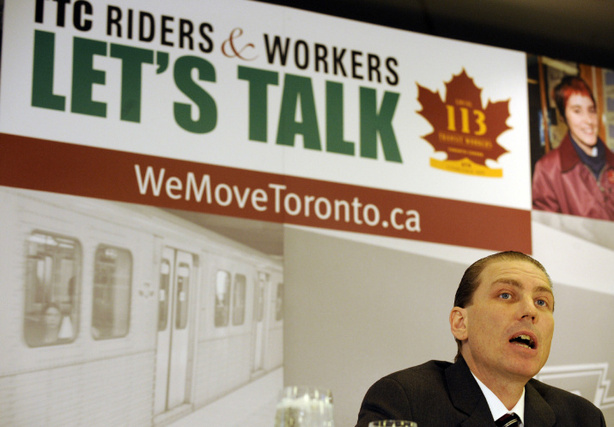 The latest front in the battle against capitalist austerity was drawn recently with various proposals to privatize key sections of the Toronto Transit Commission’s present, and future, maintenance operations. This is hardly the first salvo aimed at Toronto transit workers, but one that underscores the bosses’ determination of passing the austerity bill onto the shoulders of workers.

The appointed heads of the Commission at City Hall decided, by a slim four to three majority, to proceed with the contracting out of bus cleaning at eight garages, effectively eliminating 159 decently paid, full-time jobs. This was overshadowed only days later by confusion between the City of Toronto and the Ontario government over the city’s new light rail lines.  For a period, it appeared that the four new light rail lines would be privately designed and built, and operated by the province’s Metrolinx transit agency instead of the TTC.  A general outcry seems to have delayed a formal announcement on the future of the rail lines, but it is quite clear that this is a logical extension of the broader Ford/McGuinty/Harper offensive on workers’ living standards and democratic rights, including but not limited to the quality of health care, education, and collective bargaining rights. Now, of course, we must add public transit to that list of public goods and services that are increasingly in peril under capitalist management.

As a result of the Commission vote, two-year contracts are to be awarded to Hallcon Corporation and Topnotch Building Maintenance to perform the cleaning of the TTC’s buses. It is expected that the work will now be paid at minimum wage — in other words, at roughly 40 per cent of the current wage. As has happened to many other unionized public-sector positions, these will become the “poverty jobs” that make up the majority of new jobs created in the Canadian economy nowadays. Workers will be paid a pittance for what is often onerous, dirty, and potentially dangerous work, as TTC chair Karen Stintz recently found out after appearing on an episode of Undercover Boss Canada. Stintz was so moved by the difficulty of the job that after struggling her way through a final undercover assignment on a bus fuel line at the Wilson garage, she broke down into tears!  It appears that the effect on Stintz was only temporary, however, as she has strongly come out in favour of contracting out many TTC jobs.

Then, there is the issue of the four proposed light rail lines – the Eglinton-Crosstown, Finch West, Sheppard East, and Scarborough RT. Despite a very public dispute with Toronto mayor Rob Ford over whether these were to be built in the first place, Stintz has ultimately proved to be just as willing a lackey of the bosses’ agenda as Ford by caving into the province’s plan to privatize all aspects of these new lines, save for their operation. This is in spite of all the evidence there is showing that public-private partnerships in the sphere of public transit result inevitably in cost overruns, service delays, and poorer quality transit as a whole.

“We are virtually declaring war on our workers today. They will retaliate.”

As if this were not enough, Bob Kinnear, the president of Amalgamated Transit Union (ATU) local 113, which represents about 9,000 TTC workers, reported that 19 areas of the company are being considered for future outsourcing — everyone from gatehouse attendants to subway janitors to streetcar cleaners.  City councillor Maria Augimeri, one of the seven TTC commissioners, characterized the situation correctly when she uttered the above quote on the day of the vote to contract out bus cleaning. This “war”, of course, is part of the broader class war being waged daily in every capitalist country across the world. In Canada alone, we have witnessed the use of lockouts, back-to-work legislation, violations of collective bargaining rights, and the banning of the right to strike. These are tactics that have been used by all three levels of government at the behest of the ruling class, in an attempt to break the backs of more organized sections of the labour movement and to set an example to wider working class. All of this is just part of a broader offensive launched by the bosses to make the working class pay for the crisis they caused. Unfortunately, many Canadian labour leaders have responded to these attacks by offering up serious concessions, despite being given a strong mandate by their members to fight. Let it be learned that in the present climate, for every inch given the bosses will take a mile.

The affected ATU 113 workers in this case certainly seem to be learning. Prior to the contracting out vote, dozens of rank and file bus cleaners organized a demonstration in front of TTC headquarters. Placards and slogans such as, “We are the transit workers, we work while you sleep!” and, ‘Don’t throw us under the bus!’ were present, as was a strong militant mood. This was followed by a sit-in at the city council chambers the day of the vote. Although many of these actions were self-organized by rank-and-file workers, we do need to give Bob Kinnear and the ATU leadership credit for supporting and spurring this rank-and-file mobilization. Following the vote, Kinnear threatened a work-to-rule campaign in the future, and went so far as to say that workers could stop monitoring fare boxes. This would be an excellent tactic for two reasons. First, it would clearly hurt the commission in the pocketbook. Second, if combined with a public campaign to halt fare increases and service cuts, it could galvanize the rest of the working-class, who certainly could use a break from expensive transit costs.

Ultimately, due to a ‘no layoff’ clause negotiated in the most recent collective agreement, the workers whose jobs have been affected by the contracting out will be reassigned to other existing positions within the company. It must be highlighted, though, that management was pushing hard to repeal job security provisions during recent contract negotiations, and would much rather push these workers out for good than keep them on. The contracting out initiatives, considered in tandem with the recent banning of the right to strike, are also serving to progressively weaken the union’s ability to fight, and we can only expect these attacks to continue and intensify in the future. ATU leaders recently began an advertising campaign to garner public support, and while this is certainly a progressive step, it by itself is no panacea. A line in the sand must be drawn at some point. With worker’s rights being assaulted all across the board in Canadian society at present, one section of the working-class will at some point have to take a clear stand and through action declare that workers will not lie down and be made to pay for an economic crisis they have had no hand in creating.

John Tearse is a TTC employee and is a member of the Amalgamated Transit Union, Local 113.