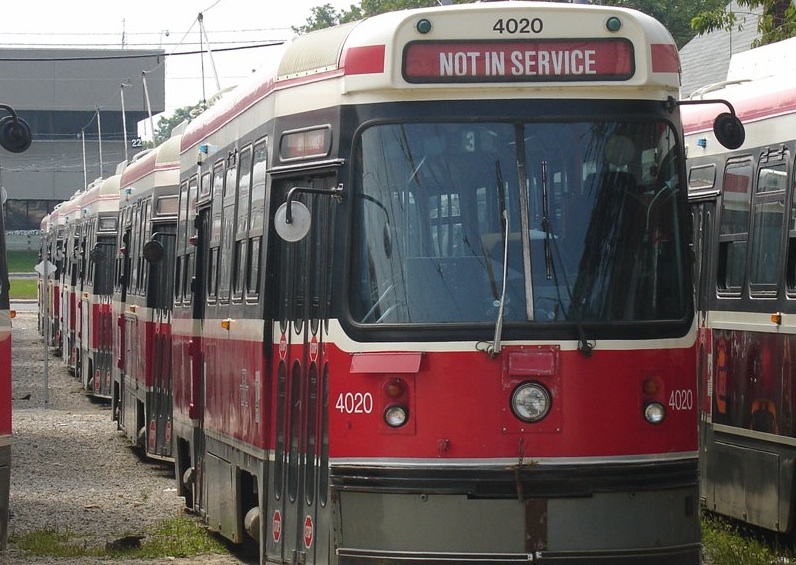 The sorry state of Toronto’s public transportation system dominated the city’s most recent municipal election campaign. Thus, it didn’t come as much of a surprise that one of the first policy announcements made by the new mayor of Toronto, John Tory, concerned the state of the Toronto Transit Commission (TTC). However, Tory’s minor reforms don’t come close to addressing the roots of Toronto’s transit crisis or the daily hardships faced by workers and youth who depend upon the system.

Flanked by TTC CEO Andy Byford, TTC Chair Josh Colle, and an anonymous protester, Tory announced that commencing at the beginning of 2015, the busiest streetcar route in the city, the 504 King, will allow all-door boarding. As the first of a series of small reforms designed to ease gridlock and improve public transit in the city, this particular initiative is intended to cut down on the time streetcars spend servicing stops by allowing passengers to board via the rear doors, which are usually reserved only for passengers exiting the vehicle. As the current official practice of picking up passengers at the front doors is thought to account for as much as 20% of the time it takes to travel from one end of the line to the other, the logic goes that opening an extra set of doors will cut down on this time dramatically.

As any semi-regular passenger on the King streetcar will tell you, however, all-door boarding is already unofficially practiced on the route by most drivers who realize that keeping the line moving is more important than ensuring that every single possible fare is collected. Making this practice official will certainly help, but its potential impact will be very limited. Ironically, where Tory’s announcement may end up being most useful is in bringing into the public consciousness the true extent of the neglect to which public transit in Toronto has up to this point been subjected.

Andy Byford, who’s tenure as CEO of the TTC up to this point has revolved around presenting a more customer-friendly face to the public, cosmetic uniform changes, and actually selling off entire sections of the Commission to the private sector, himself at least now seems to understand the scope of the crisis. He describes it as a “triple whammy” situation of (1) ever-increasing ridership, (2) aging equipment, and (3) inadequate government subsidies. Whether such a recognition actually translates to significant fundingfor transit expansion and improvement over at City Hall is yet to be seen; however, with Bay Street sharpening its knives and calling for serious austerity with the pro-business Tory now in office, one sees reason to be skeptical.

The Amalgamated Transit Union Local 113, representing TTC drivers, collectors and maintenance workers, recently released a report detailing the transit crisis in some detail. It begins by describing the pressures of growing ridership on the system. By the end of this year, there are expected to be about 540-million rides taken on the TTC. This number has ballooned by 15% over the last five years, and is expected to grow by another 12.5% over the next five years, bringing total annual ridership to over 600-million. Such are the pressures of a growing city, fuelled in part by a relentless real estate boom which has seen countless new condominium towers spring up in the downtown core in recent years, to the tune of massive profits for developers. Two years ago, according to the Toronto Star, there were 120 highrises under construction or slated to begin construction in Toronto, equating to 300,000 new housing units to be put onto the market. To put this in perspective, the city with the next highest number of highrises under construction was Mexico City with just over 30! All of this new housing is being thrown up without the necessary public funds being set aside to provide transportation (and other) infrastructure, painting us a not-so-serene picture of the anarchy of capitalist production in practice.

The ATU report points out that, in spite of ridership growth, the per-rider government subsidy is lower today than it was four years ago — at 79 cents compared to 93 cents in 2010. This makes it the lowest subsidy of any transportation system in North America. The TTC pays 68% of its own operating costs, with the rest being provided by the municipal and provincial governments. So, in other words, riders pay 68% of the cost to ride their own system, which is a “higher percentage than any other multimodal transit system in the world”. And if that is not enough, Canada is also the only developed nation without a national transit funding strategy.

The report goes on to advocate for a number of practical reforms in the everyday operation of the system in order to reduce wait times and crowding. These include all-door boarding for busy routes, further limiting left-hand turns at busy intersections, and stringent restrictions to on-street parking on busy thoroughfares. The report calls for 450 new buses to be ordered over the next three years to expand express bus networks and all-route, all-day, everyday service, including the woefully inadequate Blue Night service. Recommendations made to enhance the passenger experience and accessibility of the system include the introduction of two-hour time based transfers on all routes, extending WiFi access to cover the entire subway network, building elevators in all subway stations as soon as possible, and providing a 1.5-hour on-demand wheel-trans booking service (as opposed to the full-day in advance passengers with mobility limitations currently have to wait to get a ride).

While these reforms would be useful in terms of providing immediate relief to the system, they alone are insufficient in solving Toronto’s transit crisis. What is required, over and above pragmatic measures, is a vision for providing fully accessible, rapid transit throughout the entire city — and not just downtown!. The experience of those living in the inner suburbs of the city, whether they be from Rexdale, Malvern, or Jane & Finch, is too often of long waits for packed buses, and upon boarding, sitting in gridlock for much longer than necessary. More buses, in this regard, would help, but would certainly not solve the other problem of traffic congestion. John Tory’s proposed Smartrak corridor, running from Markham to Union Station to Mississauga, while likely useful for out-of-towners commuting downtown regularly, is not a comprehensive solution either for Torontonians. Irrespective of whether one prefers light rail or subways, it can be said that more of both are desperately needed in order to deliver real improvements. The original vision for Transit City from 2007, which was to build eight new LRT lines, or better yet, the OneCity plan from 2012, which additionally proposed to build three new subway line extensions, should be seriously revisited in this light.

Transit fares are another big issue. As a result of the lack of public investment in recent years, workers and youth have had to foot more of the bill in the form of fare increases on a fairly consistent basis. The price for a monthly TTC Metropass was just increased by $5.25 to $133.75 this year, for example, which makes it unaffordable for many. The ATU report’s recommendation for a low-income Metropass, at the student/senior price point of $108, would be a welcomed reform, however, it should not stop there. Transportation is a human right, and thus should be guaranteed regardless of income.  As a result, fares should be eliminated altogether. Some may argue that this is too expensive; however, getting workers and youth to work is a vital part of the productive process when the economy is viewed as a whole. Free transit would make the whole of society much more efficient. A socialist public transportation system would get rid of needless ticketing and enforcement expenditures and re-purpose them to better service.

As a whole, the ATU document can be said to contain much of the collective wisdom of its membership, who together run the system on a daily basis and thus are most intimately aware of its shortcomings and areas of needed improvement. One crucial plank of the report is a promise to wage a “serious advocacy campaign…in cooperation with other municipalities” leading up to the 2015 federal election pressuring all parties running to enact a National Transit Strategy if elected. Although the campaign is well-timed, the proposal to pressure the Liberals and Conservatives, in addition to the NDP, is misplaced. The former two are establishment parties of the bosses, which have alternated office throughout this country’s history, and neither have shown any inclination in recent memory towards anything other than cuts and austerity. More importantly, neither party is truly interested in improving the living conditions of workers in this country, especially if it comes at the expense of corporate profits.

The transit crisis is yet another symptom of the deteriorating living conditions facing workers across Canada. The fact that public transit dominated the recent Toronto municipal election is evidence of the fact that workers are looking for solutions to the daily hardships that they face under austerity capitalism. This presents an excellent opportunity for the federal NDP to come out in favour of massive transit expansion and making it universally accessible for all Canadian workers and youth. ATU 113, in this light, would be better served waging a campaign of mobilization in concert with the forces of the wider labour movement (regional labour councils, provincial and national labour federations) for the NDP to adopt the demand for a National Transit Strategy, along with other progressive demands such as free post-secondary education, the right to strike and collectively bargain, and full employment, rather than placing any misplaced hope in the bosses’ parties — the Liberals and the Conservatives.