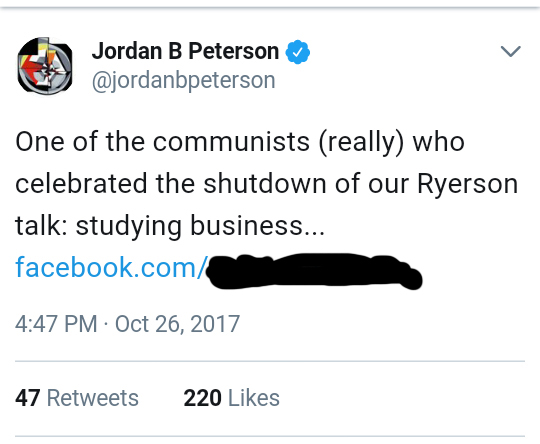 On October 26th, University of Toronto professor Jordan Peterson made a Twitter and Facebook post with a link to the personal Facebook page of a Socialist Fightback Students activist. He also did the same to other allied activists which opened them up for targeted harassment. The professor, who gained notoriety for his refusal to use gender neutral pronouns, is known to have a large following among the far-right on social media. Immediately following the posts, our activist was subjected to a torrent of hateful messages by dozens of Peterson’s followers. These posts included anti-Semitic images, slurs and violent threats. Open fascists were among those urged on by Peterson’s posts. By sharing his profile, we hold Peterson directly responsible for enabling the harassment of our activist by the far-right.

Peterson could not have been ignorant of the outcome of posting somebody’s personal Facebook page. A significant number of people even pointed out to Jordan Peterson that this would be the outcome, which he has knowingly and intentionally ignored. He has therefore explicitly and intentionally enabled harassment by the far-right.

Peterson’s tweet was made in retaliation to an anti-fascist demonstration co-organized by Socialist Fightback Students at Ryerson University on August 22nd. The demonstration was originally called to shut down an alt-right event featuring Peterson and former Rebel Media journalist Faith Goldy, among others. Goldy is a known fascist sympathizer, and was recently fired from Rebel Media for appearing on a podcast hosted by the neo-nazi Daily Stormer website. Peterson, whatever his own beliefs, willingly chose to share a stage with this despicable racist and anti-Semite. Following the demonstration, Peterson tweeted a photo of our activists with the caption, “Some of the people feeling powerful after cancellation of Ryerson talk on free speech on campus.”

We are disgusted by the targeted harassment faced by several left wing activists, and Peterson’s clear role in provoking and mobilizing this abuse. Socialist Fightback Students demands that Peterson unequivocally condemn this torrent of abuse by the far-right and admit his role in whipping it up. If Peterson refuses to clearly condemn this targeted harassment campaign, it will then be clear to all that Peterson is an unabashed fascist enabler and mobilizer.

If Jordan Peterson refuses to make this condemnation, it would serve as a useful clarification. Some have tried to argue that there is a difference between Peterson and the far-right fascists. This has especially been a common argument made by journalists from the mainstream media as well as those who consider themselves liberals. The fact that Jordan Peterson intentionally mobilized a fascist harassment campaign would settle this matter.

A fascist enabler and mobilizer should not be a professor at UofT. The university administration is knowingly protecting an idol of the far-right who is spearheading a harassment campaign against students. The student unions and the campus trade unions should mobilize collective actions and demonstrations to shut down far-right bigotry on campus and ensure that this fascist enabler is removed from his post as professor at the university.

To those of the far-right: we refuse to be intimidated!

Students and workers mobilize to shut-down the far-right!

Please contact us to offer us solidarity and support in the fight against fascist harassment, or to get involved in building the socialist movement. You can reach the Fightback national office at (416) 461-0304 or at fightback@marxist.ca 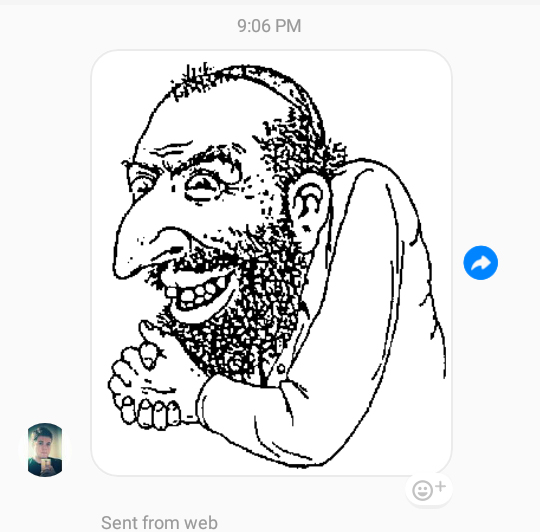 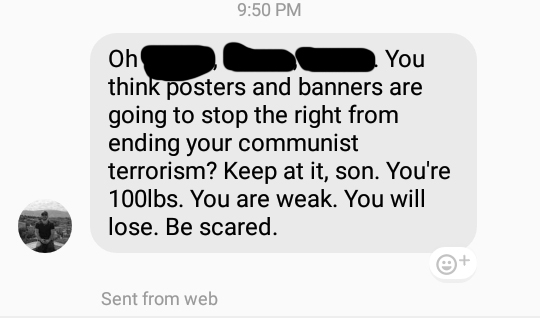 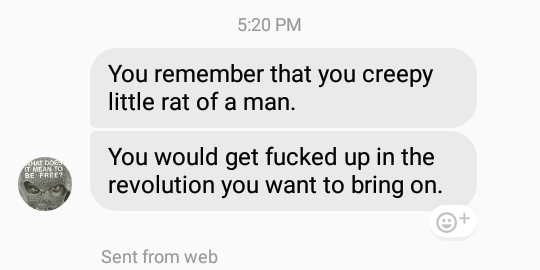