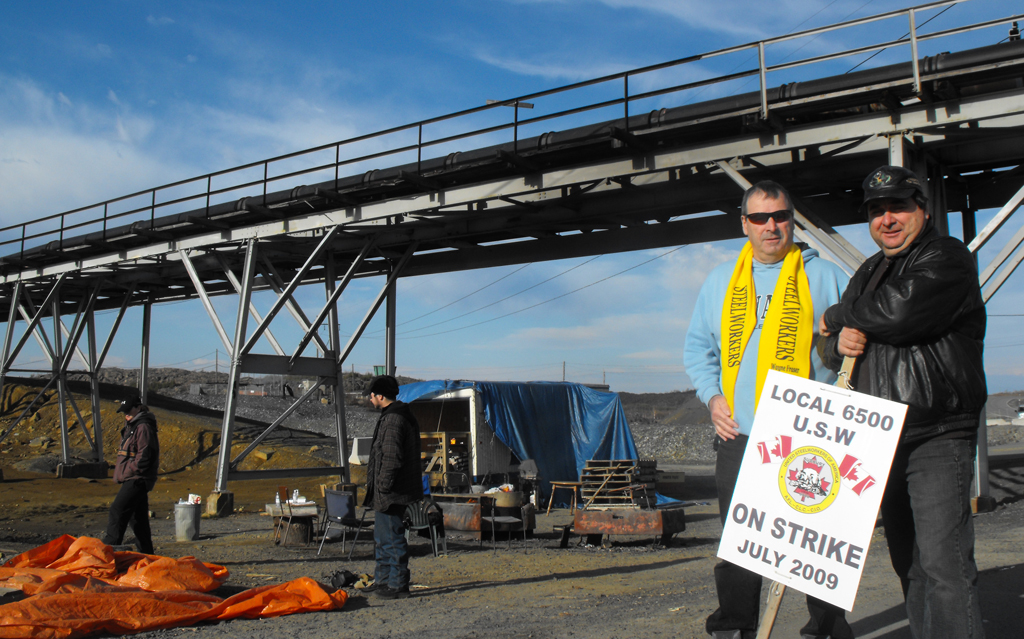 The Vale/Inco strike is entering its fifth month with no end in sight. Despite the efforts of the corporate press to attack the striking workers, community support for the strikers remains strong.

The media is portraying the members of United Steelworkers (USW) 6500 as being over-paid and under-worked. The local media blames the strikers for the slump in the local Sudbury economy. “If we didn’t have the strike, we wouldn’t have as many lay-offs. Many of these people have lost their jobs because of the strike” states John Caruso, the vice-chair of the Community Adjustment Committee in The Northern Life, one of Sudbury’s largest newspapers.

Despite coverage like this, workers in Sudbury are largely standing together in solidarity. Michelle Becvar works at CIBC and was on strike for over four months last year protecting her wages and pension; she says, “We understand what the strikers are going through. These companies make billions, and all the strikers want is enough to provide for their families.” Michelle and others go down to the picket lines every Sunday with homemade meals for the strikers to show their sympathy and solidarity with the hardships the workers face while on strike. “Support for this strike is stronger than the ’78 strike,” says Vale/Inco driller Rodger Paquette who has worked for Inco for 36 years. Local businesses have been showing much of their support for the Steelworkers off-record for fear of losing contracts with Vale/Inco. “The local businesses have been providing free products and services, or at a discount, to the strikers, but all off-record” says Mike Loren, a Vale/Inco employee for 20 years. This shows the fear and control that multinational companies can have over the population and how truly un-democratic they are.

The average Vale/Inco miner was making $800 dollars per week; now, they are lucky to bring in $200 of strike pay. The miners are taking this hit to their standard of living in order to fight for their rights and to protect their community from greedy multinationals. Due to Vale/Inco’s refusal to negotiate a fair deal with the union, the strike is beginning to affect local social services and charity organizations. The Greater Sudbury Area United Way almost exclusively relies on the Vale/Inco workers for donations during the holiday season; now, the United Way and other local charities have to look to other places for fundraising, and will most likely not find it. Before the strike began, the average wait for social services was four days; now, wait times have increased to nearly three weeks, especially in the credit support sector.

The corporate media has tried whipping up opposition to the striking workers by claiming that the strike is having a negative effect on the Sudbury economy. In a recent interview with The Northern Life, Warren Philip, a northern Ontario market analyst for Canada Mortgage and Housing Corporation, said that since the strike began, the number of homes sold has dropped 25 % while prices have dropped 15%. Philip says that in large part, this is due to the strike at Vale/Inco. The media is trying to blame the workers for the problems in the economy rather than blaming the shortcomings of a capitalist system that cannot provide for workers’ needs.

The bosses and their allies in the bourgeois media are telling workers and young people that we have to pay for this recession through pension, education, healthcare, social service, and pay cuts. But, the workers at Vale/Inco are telling another story. By fighting back and winning support from the community these workers are showing that there is another option to capitalism’s race to the bottom. Together, we can fight and make the bosses pay for their own crisis.