Whose sovereignty is it anyway?

Here, Joel Bergman of the La Riposte editorial board presents the view of the Quebec Marxists on the National question. He outlines that there is a huge difference between the “sovereignty” of the workers and the sovereignty of the bosses and the PQ leadership.

The national question has dominated Canadian politics for years. In English Canada, the media and the bourgeois federalist government deride the “separatists” for trying to break up the country. In Quebec, the oppression of the Québécois is said to be solved with “sovereignty.” But what does this mean? In recent years, the utter social betrayal of the bourgeois nationalist Parti Québécois has led many people to question the intentions of their sovereigntist leaders. What is the Marxist answer to this question?

Quebec is a nation oppressed by the Canadian state. We fight against all forms of national oppression and we defend all the democratic rights of the Quebecois – including the right to self-determination, if the Quebecois democratically decide on this question. That being said, how can the liberation of Quebec be achieved and who in society can lead the struggle for emancipation?

“In these times of economic crisis, it is not the right time to talk about sovereignty.” – Pauline Marois, Leader, Parti Québécois

These recent comments have left a lot of honest workers who bought into the PQ’s nationalist rhetoric scratching their heads. The real interests of the bourgeois leaders of the PQ were exposed point blank. They are using the aspirations of millions of Quebecois workers, yearning for emancipation from national oppression, as playing chips in the game of world capitalism. This proves that there is a class divide within the sovereigntist movement. The bourgeois and petty bourgeois leaders of the Parti Quebecois and the Bloc Quebecois see the struggle for sovereignty as part of a process of coming to a reasonable accommodation with imperialism and the Canadian capitalist state for a bigger share of the pie, all the while giving themselves a progressive visage within Quebec. The workers on the other hand have seen this movement as a revolutionary struggle for the amelioration of their conditions. This difference has been both accentuated and masked throughout Quebec’s history, but it has always existed.

“In a word, oppressor and oppressed, stood in constant opposition to one another, carried on an uninterrupted, now hidden, now open fight.” – Marx, The Manifesto of the Communist Party 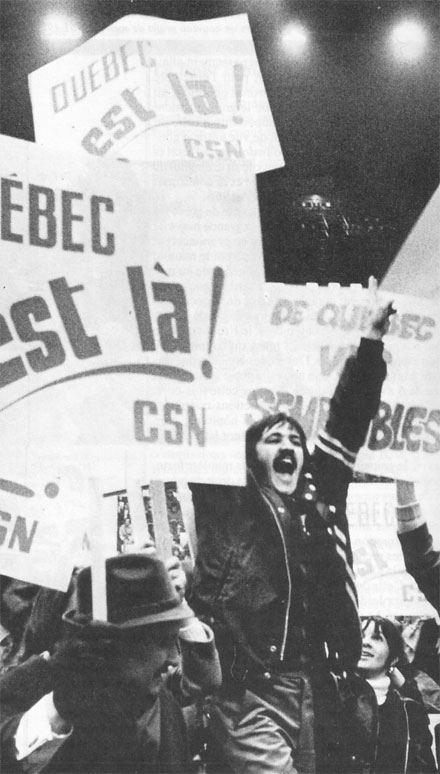 The Quiet Revolution and The Common Front

This is confirmed by looking at Quebec’s history. The “Quiet Revolution” as it is popularly known was a struggle of national liberation led by the petty bourgeoisie of Quebec in the 1960s. Inspired by the numerous heroic strikes of the Quebec working class during the 1940s and 1950s, who had been beating back Quebec despot Maurice Duplessis, the Quebec petty bourgeoisie (lawyers, intellectuals, academics, and small business people) was able to use the state and a series of nationalizations to carry out, or at least partially carry out, the tasks of the national democratic revolution and bring Quebec out of the stone age.

The imperialists had economically modernized the province in order to extract massive profits, but the state of the political and social institutions mirrored that of a banana republic. The Quebecois petty bourgeoisie was completely dominated by imperialism. Using the power of the state the petty bourgeoisie was able to push back the Canadian and American imperialists, and make room for the development of a Quebec bourgeoisie. Between 1960 and 1990, through the use of the State, francophone ownership of business in Quebec rose from 15% to 65%, and these are not all small businesses — several have developed into international corporations, such as Bombardier and Quebecor World. They were able to strike out and carve a niche for themselves. Of course, after they had completed these tasks, they naturally left the working class high and dry and the class contradictions latent within Quebec society came crashing to the fore.

Because the social movements in Quebec up until this point has been led by petty bourgeois radicals, the main demands of the movement were largely based around nationalism. However, near the end of 1971, the class divide started to exert itself. The union infighting between the FTQ, CSN, and CEQ, which had cut across working class unity (and still does to this day), came to an end. All the major trade union federations united to form the Common Front in 1971. The Common Front issued a manifesto that declared, “American capitalist imperialism has a direct influence on the life of each Quebecois. To break out of it, we must first of all understand the function of capitalism, which leads to imperialism. Once understood, it is not enough to replace American capitalism with a Quebec capitalism, but to look for something else which can meet the real needs of the population.”

The national unity of the Quebecois had been shattered along class lines, with a working class moving in the direction of socialism. The PQ at the time was even denounced by the CSN, which called it, “a professional and technocratic petite bourgeoise, whose ambition is to replace the Anglo-Canadian bourgeoisie in Québec (notably through state institution),” – which is exactly what happened. The inability of the petty bourgeois nationalists to solve any of the contradictions of the system and their narrow class outlook had been demonstrated to the working class, and the workers were determined to take the lead into their own hands to fight for their interests. The national struggle became class conscious, the class struggle cut across the national struggle, and for a time, the workers held power, but they just didn’t know it.

Because this movement was largely syndicalist and did not have the perspective of gaining political power, it was eventually pushed back into the Parti Quebecois and the movement for the liberation of Quebec was once again channelled along nationalist lines. The PQ used the term “souveraineté” precisely because of its ambiguity, to appeal to the working class in Quebec. As proven, the workers have seen “souveraineté” as a revolutionary struggle for the amelioration of their conditions while the petty bourgeois and bourgeois leadership saw the struggle as part of a process of coming to a reasonable accommodation with imperialism and the Canadian capitalist state. The leaders of the sovereigntist movement have purposely acted as mediators between an enraged population and the Canadian state.

In 2005, there was a manifesto written called “Pour un Québec lucide” (in English, “For a clear-eyed vision of Quebec”). It was signed by 12 prominent Quebeckers, including former premier and Bloc Quebecois founder, Lucien Bouchard. Among the other signatures are Québécois capitalists, academics, and PQ and Liberal politicians. The striking thing is that not all of these people are nationalists. The thing that bound them all together was a common class interest. The manifesto clearly states: “Some members of our group are in favour of sovereignty, others believe that Québec’s future will be better ensured within Canada. Despite these different points of view, we are all certain that whatever choice Quebeckers make, the challenges facing us remain the same.” The bourgeoisie are obviously united and are even stating, “Sovereignty is off the agenda.”

“Pour un Québec lucide” laid all the cards out on the table. The manifesto laid out a bourgeois plan to tackle the issues facing Quebec in a globalized capitalist market. Its solutions include many unpopular measures like raising tuition fees and electricity rates, as well as promoting public-private partnerships to make Quebec more “competitive” to assist in alleviating government debt. Not coincidentally, these are the exact same measures that the bosses are proposing and implementing across Canada and in the US. They are attacking the gains made by the working class. The bourgeoisie are united across the national divide and therefore so should we. The working class must unite to fight against these attacks and refuse to be divided or distracted. This is the only way to defend the gains of the past and fight for a future society worth living in.

The document points out the natural hatred that the Quebec working class has for French bosses, but draws the erroneous and utopian conclusion that this attitude can, and must, be eliminated: “For years, people deplored the fact that the Québec economy was run by English-speaking business people; today, French-speaking business people control our economy and they are roundly criticized, to the point where their motives are questioned if they contribute time and money to philanthropy.”

In periods of capitalist growth, it was much easier for the bourgeois to throw the workers some table scraps down and present themselves as the leaders of a nation. The progressive veil has now been thrown off of the sovereigntist movement and the unity of the bourgeois exposed. Now, the interests of the bourgeoisie show themselves clearly to be in glaring opposition to those of the working class of Quebec.

For a Socialist Solution!

It is precisely for this reason, and the historical condemnation of the petty bourgeois and bourgeois leadership of the sovereigntist movement, that the movement for national liberation must be led by the working class. Who are the main allies of the Quebecois working class in their fight against the Canadian capitalist state that oppresses them? Who also is attacked by the Canadian state – who is forced into unemployment and legislated back to work? The Canadian working class! It is the Canadian and American capitalists who have vested interests in oppressing Quebeckers. It is the Canadian working class that has a vested interest in defending and spreading the gains of the Quebecois workers. As well, the francophone bourgeois are in on this game and it is in their interests to divert the movement for the liberation of Quebec along national lines. The francophone bosses are using the energy and desires of Quebec workers to suit their own aims.

The fundamental idea we can learn from all this is that working class unity is needed to liberate the Quebecois from national oppression. The bourgeois and petty bourgeois of Quebec are incapable of completing the tasks of the democratic revolution. At times, they rallied the Quebec workers to push back the Canadian capitalists and carve themselves a piece of the capitalist market. But, they are scared to death of the power of the workers. They are scared because they know that if the workers place themselves at the head of the national liberation movement, it will toss the Quebec bosses into the dustbin of history. They are brothers and sisters with the Canadian and American capitalists and when faced with a united working class fighting for a revolutionary change in society, they are allied against the workers.

To defeat the Canadian capitalist state that has been oppressing Quebec, the workers need to be even more united than the bosses. The Francophone working class, allied with the Anglophone working class, can beat back the bosses, take control of the main levers of the economy, and tear up the bourgeois federalist constitution. In its place we will institute a voluntary and equal union of a socialist Quebec and a socialist Canada. We can build a society without poverty, war, and the rampant inequalities of the capitalist system, where we plan production based on need rather than blind production for profit. To do this, we don’t need to separate from ourselves but we need to separate from the capitalist system, to expropriate the commanding heights of the economy from the bosses, be they French or English.