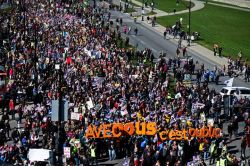 This past week in Quebec has been a large demonstration of force by the working class in the province. First, the FAE (Fédération autonome de l’enseignement), representing about 34,000 elementary and high school teachers held a one-day strike on September 30th.  This began with pickets at all of the schools around the province, effectively shutting down classes for some 275,000 students. In the middle of the day the strike culminated with one central, unified demonstration of about 10,000 in downtown Montreal. The following day on October 1st, over 35,000 teachers, students and parents, organized in the “Je protège mon école publique” movement, linked arms, blocking over 370 schools across the province to protest against cuts to education funding. A couple of days later on October 3rd,  the week finished with a bang as 150,000 workers organized in the Common Front of public sector workers flooded the streets of Montreal. 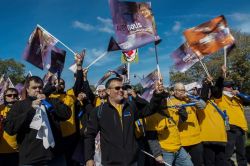 The collective agreements of public sector and para-public sector workers expired on March 31st. The Common Front, which unites 400,000 state employees affiliated with the CSN, the FTQ, or the CEQ, is seeking a raise in salaries of 13.5% over three years. The government is demanding a freeze in salaries for the next two years, and a raise of just 3% over the following three years. The government also wants to increase the nominal retirement age from 60 to 62. It would be an understatement to say that the government and the workers are far from reaching an agreement. There is a chasm between the two, and it’s becoming clearer and clearer that if the workers are to prevail, it will not be through negotiations. 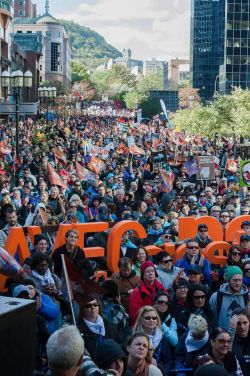 The president of the Treasury Board, Martin Coiteux, has confirmed that “the government will not give the public sector unions what they ask for.” According to Richard Perron, the president of the SPGQ public-sector professionals’ union, it’s clear that the Liberal government “remains adamant, vigorously encamped upon its austerity ideology.” In the context of the global crisis of capitalism and the Canadian economy entering into recession, the failure of these negotiations is hardly a surprise. The government of Philippe Couillard, which represents the bosses’ interests, doesn’t have the luxury or the will to grant decent working conditions to public sector workers. 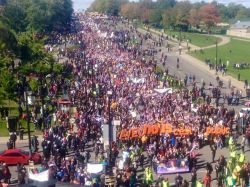 The rank-and-file workers have demonstrated over the past month their willingness to fight the government’s austerity programme. As of September 30th, 158 union locals in the healthcare sector have voted for six-day strike mandates, as have teachers’ unions at all of the province’s 61 CEGEPs and the 34,000 members of the FAE elementary and high school teachers’ union. In total, there are currently over 400,000 public sector workers with strike mandates. These strike votes have reached record levels, with a vast majority being approved by more than 85% of local members. These events, and other movements over the past year, clearly demonstrate the radicalization of the workers, and their desire to fight austerity.

The Blindness of the Leadership

Despite the will of the rank and file to fight for decent working conditions, the leaders of the Common Front have adopted strategies that risk demobilizing their forces and leading to repeated failures. The ranks must understand that the leadership is sowing the seeds of failure for the movement.

The leaders of the Common Front are effectively asking their members to adopt six-day strike mandates on a rotating, regional basis. The problem is that isolated strikes on the local level carried out at different times have little chance of putting pressure on the government, but risk undermining the sense of unity of the workers in the Common Front, and thus demobilizing these forces. The only strategy capable of leading to real victory is a general strike of the entire public and para-public sector, a province-wide strike of all the workers at once.

The strategy of rotating and isolated local strikes proposed by the leaders of the Common Front clearly shows their lack of will to fight to the end. The president of the FTQ, Daniel Boyer, has overtly shown his reticence to launch a strike: “We’re not crazy all the time! We know that going on strike could give ammunition to the government.” This shows that despite the obvious signs of that the rank and file is ready to fight, the leadership does not really believe in the strike, and thinks that this form of pressure will help the government! It seems that effectively the leadership will only work to organize a strike that it knows won’t really have any effect! How can they hope to mobilize and inspire workers like that?

The leaders of the Common Front have even resorted to asking for the support of Pierre-Karl Péladeau, the billionaire owner of 40% of Quebec’s media, who is now the leader of the Parti québécois. Jacques Létourneau, president of the CSN, has called on Mr. Péladeau to save the negotiations: “They claim, the Parti québécois, to be the party of the people … of the middle class, of working men and women. Well, let’s hope that the leader is able to recognize that workers in the public sector are part of this middle class.”

The appeals of Mr. Létourneau and Mr. Boyer to the number one representative of the Quebec capitalist class and chief union buster (with 14 lockouts on his resumé) shows the blindness of the Common Front leaders, and how they place more faith in an oligarch like Mr. Péladeau than in the hundreds of thousands of rank-and-file workers. To add insult to injury, this appeal to Mr. Péladeau comes at a time when Québecor, in which he is the majority shareholder, has just locked out the workers at its Mirabel print shop. This clearly shows that the leadership doesn’t understand who their enemy is in this struggle. The unions cannot allow themselves to have illusions in the Parti québécois or in Mr. Péladeau: the PQ has openly shown its nature as a bosses’ party as Pauline Marois continued the work of Jean Charest in imposing austerity while subsidizing major corporations. Furthermore, it was PQ premier Lucien Boucard, himself a former minister in the federal Conservative government of Brian Mulroney, who began the march towards “deficit zero” which is so dear to the capitalists.

The Attacks of the Robillard Commission

The political agenda of the Liberal Party, and Parti québécois, is to make the working people of Quebec pay for the economic crisis, through a massive program of austerity, the dismantling of social services, and privatizations. This is agenda is clearly revealed by the recommendations of the Robillard Commission, set up by the government to advise them on the best way to implement austerity.

The commission has proposed ending the monopoly of the state liquor company, the SAQ by “liberalizing the trade in wines and spirits.” Mihaela Firsirot, professor of competitive strategy at UQAM, has explained the consequences of this liberalization: “economic history is clear. Whenever a state monopoly is subject to competition, private companies that arise choose to serve only the most lucrative market segments, leaving the state monopoly the costly responsibility to serve less profitable or unprofitable markets. … As an obvious result, the profitability of the state monopoly gradually deteriorates.”

Aware that the liberalization of this market would result in significant losses for the SAQ, the commission has proposed passing the bill to the taxpayers by raising taxes on wine and spirits. In November 2014, we explained how Philippe Couillard’s proposal to privatize 10% of the SAQ’s capital would have the effect of depriving the government of $100 million in revenue. In the final analysis, the Robillard Commission, by proposing the liberalization of the trade in wine and spirits, aims to enrich a small number of business owners, while passing the bill for the government’s losses onto the working class.

Furthermore, Mr. Leitão has promised to gradually reduce corporate taxes from 11.9% to 11.5% and to provide $361 million in subsidies big mining companies through the Plan Nord project. These companies “will receive an allowance of support for exploration from the government of nearly $5 million a year for the next three years.” All of the measures proposed in the budget and by the Robillard Commission are simply one attack after another on the working people of Quebec.

World capitalism entered crisis in 2008, and hasn’t been able to find a way out. The International Monetary Fund confirms that “investment in fixed assets in all industrialized countries are at a level 25% lower than before the 2008 crisis hit.” While the entire global economy is heading towards a renewed slowdown, it’s Canada that is first to feel it.

In fact, there is a new recession in Canada, the first since the crisis of 2008-09. The Bank of Canada has just announced that their statistics indicate that the Canadian economy has contracted by 0.6% in the first quarter of 2015, and by 0.5% in the second quarter. On the investment side, there is $680 billion of “dead money,” in the Canadian economy which shows the lack of confidence that Canadian investors have in the market.

This is the context in which we should view the Couillard government’s commitment to reaching a balanced budget. While they have already been forced to impose drastic austerity due to the crisis of capitalism, we can expect nothing but even deeper cuts from the government in this new period of recession.

Workers, youth, and following generations face the very real possibility of “perpetual austerity.” This austerity is simply a necessary consequence of the global crisis of capitalism, an organic crisis that springs from the inherent contradictions of the system and the anarchy of the market.

The recommendations of the Robillard Commission and the Leitão budget are just the latest steps in a vast program of perpetual austerity, which in reality only serves the interests of the big bosses, the bankers, and the billionaires. The political agenda of the government is unequivocally a class agenda, the agenda of the Quebec capitalist class to crush the power of unionized workers, and increase the profits of a small minority.

Towards a Common Front General Strike

We are faced with a future of perpetual austerity, with capitalism in a deep crisis. The Common Front must organize a plan for a 24-hour general strike, and rank-and-file workers must push for this through their local general assemblies. This can act as a massive show of force to reverse the cuts. It is crucial to criticize the attempt of the leadership to restrain this movement: the proposal of isolated regional strikes, as well as the appeals to Mr. Péladeau and the PQ, must be done away with if the movement hopes to achieve real victories.

A 24-hour general strike would be a huge show of force which would clearly demonstrate who makes society run, and who are the real creators of wealth. However, more importantly, it would demonstrate to the workers themselves their true power. The struggle must also, at a certain point, be extended to private-sector workers. Austerity doesn’t just affect the public and para-public sectors, but is a concern for all the workers and youth of Quebec. Private-sector workers will also be heavily affected by cuts in education, health, and daycare. Mr. Péladeau’s latest lockout, at Quebecor’s Mirabel print shop, is another direct example of  the crisis of capitalism in the private sector.

If a 24-hour general strike is not enough to cause the Liberal government to back down, the workers’ movement must be ready to start escalating its tactics. This government has shown its bad faith and its will to impose austerity no matter the cost. The movement must respond with an equally firm will to end this bloodletting.

It is becoming clearer and clearer that we cannot defeat austerity while remaining within the limits of capitalism. The crisis of the system will consistently lead to more austerity, cuts, and privatizations. A strike is not an end in itself, but a means to attain our objectives. Thus, it is crucial that the workers’ movement adopt a socialist perspective, in order to defeat austerity once and for all!