Yellow Vest Canada: a racist perversion of the Gilets Jaunes 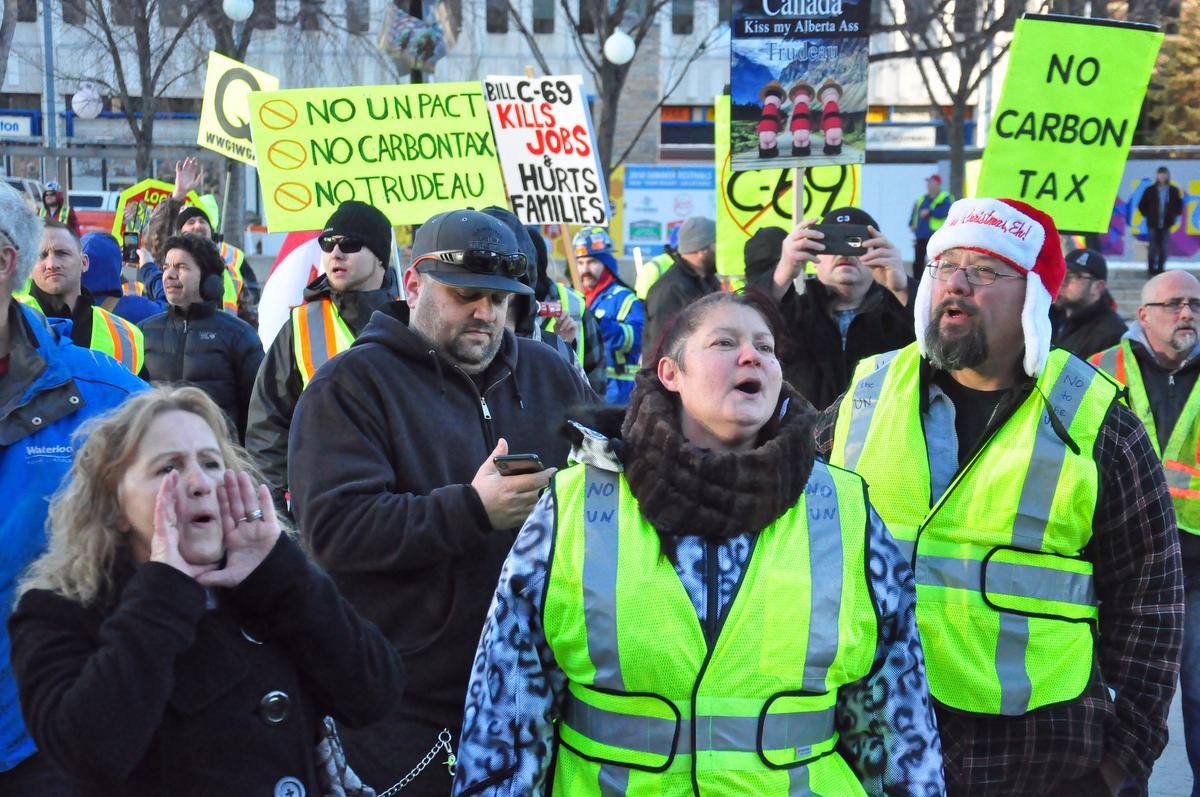 In mid-December, Canadians witnessed the start of the “Yellow Vest Canada” movement, with protests popping up in several Canadian cities. The majority of these protests have taken place in Western Canada, particularly in Alberta. Many protesters are frustrated individuals voicing their complaints with Canada’s oil crisis and the Trudeau government. Canada’s recent entry into the UN’s migration pact has also been a sore issue with many protesters. Despite basing itself on the frothing anger of Canadian workers, this movement has shown itself to be reactionary to the core.

The Yellow Vest (Gilets Jaunes) movement in France has been laying waste to the French establishment over the last few months, and has sent shockwaves over the entire globe. The consumer carbon tax proposed by Emmanuel Macron—forcing the French workers to pay for the wholesale destruction of the environment by multinational corporations—was the final straw. What started as a wave of rural protests quickly turned into an outlet for the general malaise in French society. Although the Gilets Jaunes have no real political leadership, they have been barreling towards revolutionary conclusions. Over the last few months, the Gilets Jaunes have purged their ranks of whatever far right elements may have existed. The Gilets Jaunes have shown their interests lie with the interests of the French working class. But the movement in Canada has a completely different character.

The Yellow Vest Canada movement has distanced itself from its French inspirers. James Brown, a trucker from Windsor Ontario, told the news that the Canadian protesters “…have absolutely no ambitions to be like France at all, with setting things on fire, getting all violent the way they do. We want a completely peaceful movement and that’s it.” But the real reason differences lie in the aims of their movement.

The Canadian Yellow Vesters have put forward a series of “anti-globalist” demands, such as the liquidation of the Trudeau Liberal government, the elimination of carbon taxes on western oil companies, and for Canada to leave the recent UN migration pact. These demands are put forward for entirely reactionary purposes, often to stop immigration to Canada or to give free reign to Alberta’s oil barons. Additionally, the movement is host to all sorts of unsavoury characters, ranging from Conservative Party stalwarts to outright fascist groups such as the Soldiers of Odin.

The reactionary character of the Yellow Vest movement can be seen clearest online. The movement has a particularly strong presence on social media. One such Facebook group, “Yellow Vests Canada”, has over 100,000 members and states that: “This group is to protest the CARBON TAX and the Treason of our country’s politicians who have the audacity to sell out OUR country’s sovereignty over to the Globalist UN and their Tyrannical policies.” Another organization, “Canadian Coalition for Responsible Government”, has pledged to “Make Canada Great Again” on their website, a clear nod to Donald Trump.

The overwhelming presence of far-right ideas is such that it has even led to splits in the movement. This happened when Canada Action, one of the main organizations behind the convoy to Parliament Hill, pulled out after hearing the “very extreme opinions” of the other organizers.

Although some honest and frustrated workers have been swept up by this movement, its essence is entirely reactionary. Moreover, the most rabid wing of Canada’s oil industry has already ploughed money into the movement for its own benefit. Glen Carritt, a past organizer for the convoy to Ottawa, told the Calgary Herald that “We’ve got some big companies on board…” At the end of the day,  the “Yellow Vest Canada” movement is nothing but an attempt to hoodwink working people into fighting for the interests of the billionaires and their racist pals.

Fortunately, the “Yellow Vesters” have had little success in this direction. On Jan. 22, Yellow Vesters attempted to flex their muscles with a “Stand Up Canada Yellow Vest Pipeline Rally” near Lamont, Alberta. The organizers hoped for some 2,200 vehicles to participate in the local convoy, but only a pitiful 30 trucks and cars came to show support. The GoFundMe page for the Parliament Hill convoy is also failing, and hundreds of people are asking for their money to be returned.

Moments like this demonstrate the weak nature of the Yellow Vests in Canada. The movement has little support outside of the oil industry and Conservative Party, with the exception of the Soldiers of Odin, La Meute, and other reactionary fringe groups. The Yellow Vests have no base in the labour movement, and no support from the broader working class. Of course, even one racist protest is too many, and should be met in response by mass demonstrations whenever possible. In doing so, we can help expose the vile ideas of these groups, and weaken their pull on disillusioned workers.