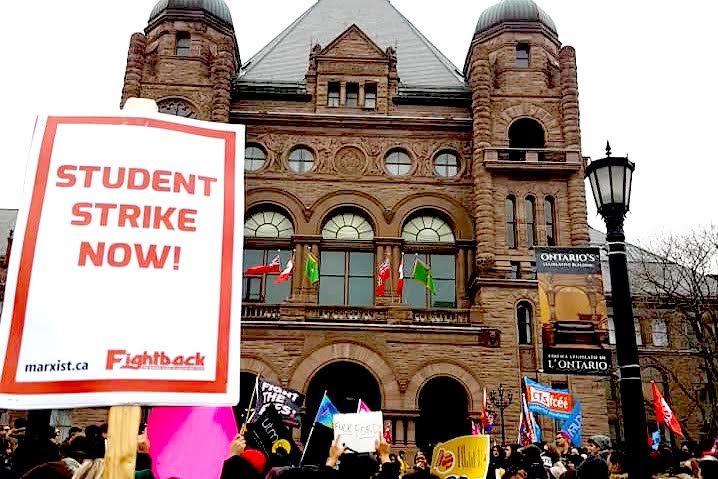 On the weekend of Jan. 18-20, delegates at the Semi-Annual General Meeting of the Canadian Federation of Students (CFS) approved a motion to create a plan for an Ontario student strike. The vote was taken only days after the Ford government announced steep cuts to post-secondary education, primarily impacting low-income students. While an official announcement has not yet been made, the resolution has been shared on social media (see below). The text indicates that a “draft plan” for strike action will be developed in the coming months, but will not be voted on until the summer of 2019. The draft plan, according to the resolution, must include, “a budget for strike action, a logistics plan with possible strike activities, and a framework of strike demands that include key issues affecting students.” Furthermore, the resolution says that CFS staff must, “research the structure of Quebec student unions with relation to pursuing strike action and release a report of their finding by April 2019.”

As of now, students still have more questions than answers. However, it is reasonable to assume that the strike motion was approved, at least in part, as a response to the recent attacks of the Ford government. During the meeting, a rally was held on the lawn of Queen’s Park to condemn Ford’s decision. Despite being called at the last minute, the rally attracted around 500 people. Fightback activists attended the rally, which was co-organized by the CFS, and immediately noticed the anger of the crowd. “Fuck Ford” was a popular chant among protesters—despite being asked not to cuss by rally organizers (a request which the crowd promptly ignored). Their anger was not lost on those CFS delegates present who, feeling the pressure, voted for strike action when they returned to their meeting.

Moreover, while details remain skant, the faint outlines of a strike have now been sketched, and whatever action is produced will find the reversal of Ford’s cuts and the fight for free education as one of its main objectives.

This leaves one question: what happens now?

A student strike is an important weapon in defeating the Ford regime, and a welcome departure from the years of lobbying which have occupied the CFS previously. Unsurprisingly, students everywhere are excited at the prospect of repeating what the Quebec students achieved in 2012. However, in order to repeat the successes of those great events, immediate action must be taken to build momentum and rally students for strike action in the coming months. In a heated moment such as this, delay is impermissible. Inaction of even a few weeks can result in the momentum being lost, the energy of students dissipating, and the strength of any future strike being weakened.

The Quebec Student Strike of 2012 did not fall from the sky. The first students did not vote for an unlimited strike until February 2012. However, the official campaign began well before this, in August 2011. In that time, a series of escalating actions were held in anticipation of the unlimited strike, including a two-day strike and mass protest of 20,000 students in November. In this way, the organizers built confidence in the student masses, deepened their influence across the province, and sent a message to the government that they had no intention of holding back. As a result, the unlimited strike which started in February 2012 and lasted until September proved enormously successful, leading to the downfall of the government and a freeze in tuition fees. The strike, of course, may have produced far less satisfying results were it not for the series of mobilizations leading up to it.

The Ontario student movement must heed these lessons. As of now, there is currently no indication that mass mobilizations or limited strikes will be held before the larger strike vote in the future. If so, this would be a mistake. As in Quebec, immediate action should be taken to build momentum, including mass demonstrations, emergency general meetings and a one-day strike.

We also do not have the luxury of time. Ford’s cuts will come into effect by September of this year. It is therefore vital that a decisive strike action be launched sometime before then, in order to stop the cuts from being implemented. In Quebec, the tuition increase was supposed to come into effect in September 2012. The unlimited strike began almost seven months earlier, providing students with ample time to display their strength, disrupt the province, and force the government to back off. Leaving strike action until the last possible moment, or even after the cuts have been introduced, is akin to waiting until you have been shot to draw your pistol.

Finally, ordinary students should be encouraged to have lively discussions through emergency general meetings on the demands of the movement. For our part, we believe the demands for free education, cancellation of student debt and the defence of campus services should be given priority, as these demands will encompass new students, older students and campus workers alike, providing greater numbers to the movement and thus increasing its strength. The question will be raised, “but how do you propose to pay for these demands?” In response, the student movement should explain how much money is wasted on corporate bailouts, tax cuts, and bloated CEO compensation in Ontario. That wealth, much of which sits idle, should be taken into the hands of society and used to fund those services ordinary people need, including education. The only other option would be to find “efficiencies” elsewhere. This is just another word for cuts, and would be parroting the language so often used by Tory politicians—hardly an enthusing proposition.

It has been decades since a student strike was last held in Ontario. The prospect of one happening now is an exciting notion and, if conducted properly, it can easily repel Ford’s cuts. Immediate action must now be taken to guarantee its success. The Quebec Student Strike is slowly becoming a source of inspiration for more and more students. The Ontario student movement must study its lessons, put them into practice, and aim to recreate those great events. Protracted and militant action is what it took to defeat the government in Quebec. Nothing less is required to defeat the monstrous government of Doug Ford.

Sign the petition for a student strike against Ford’s education cuts here.

Therefore be it resolved that the Ontario Executive Committee work with Federation staff to develop a comprehensive Ontario Students’ Strike Plan, reporting back with a draft plan for approval from the Federation membership by the 2019 Summer Ontario General Meeting; and

Be it further resolved that the plan be developed with insight and consultation from solidarity partners, labour unions and activists, the leaders of the 2012 Québec student strike, and non-CFS member student associations; and

Be it further resolved that the plan also be developed with insight and consultation from the International Students Constituency, who would be disproportionately affected by a strike, recognizing the unique challenges and experiences of international students and informing specific components within the draft Ontario Students’ Strike Plan as well as recommending a contingency plan for those impacted; and

Be it further resolved that the plan include a budget for strike action, a logistics plan with possible strike activities, and a framework of strike demands that include key issues affecting students; and

Be it further resolved that, in the interim, Federation staff research the structure of Quebec student unions with relation to pursuing strike action and release a report of their findings by April 2019; and

Be it further resolved that the report be used as tool to train member locals in strike literacy.