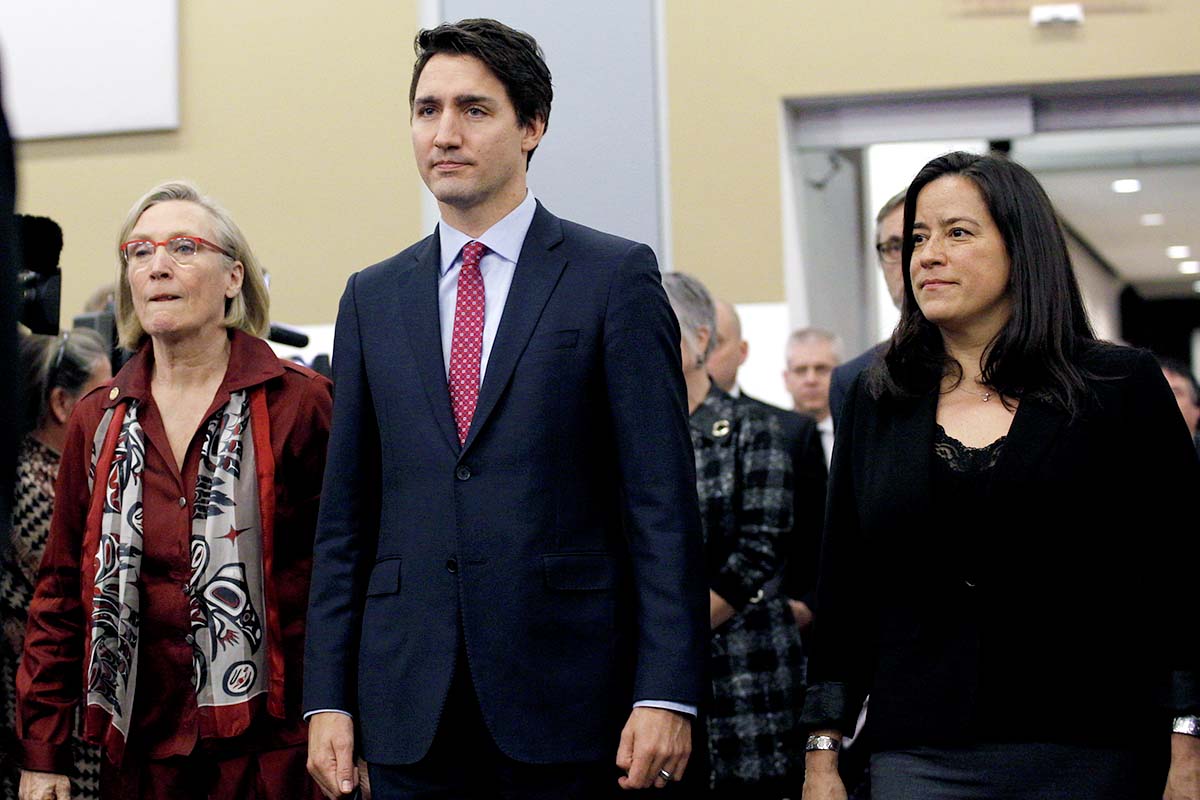 On Feb. 7, 2019, The Globe and Mail published a story which alleged that Justin Trudeau’s office “attempted to press” former Attorney General Jody Wilson-Raybould to interfere in the corruption case of SNC-Lavalin, a major Canadian construction firm. According to the Globe, Raybould resisted the pressure, leading to her removal as Minister of Justice and demotion to Minister of Veterans Affairs. What has unfolded since then is a political drama that has dominated news headlines, unveiled the shady inner workings of the Liberal Party, and threatens to discredit the country’s political and business elite. Something, no doubt, is rotten in the state of Canada.

The story so far

Back in 2015, SNC-Lavalin was charged by the RCMP with fraud and corruption in relation to nearly $48 million in bribes to Libyan officials between 2001 and 2011. The court case is still in progress; if convicted, SNC will be barred from bidding on federal contracts for 10 years.

According to the Globe story, Raybould was approached by the Prime Minister’s Office and pressured to ask prosecutors to settle with SNC out of court, allowing them to sidestep a criminal conviction and continue bidding on federal contracts. Raybould resisted the pressure, the story goes. Shortly after, in mid-January, Raybould was demoted from Minister of Justice to Minister of Veteran Affairs, with no appropriate reason being given at the time.

The Globe story broke a few weeks later, which offered an explanation for the abrupt demotion. The Liberal Party immediately went into damage control. According to some experts, the act of pressuring the attorney general to interfere in a corruption case may have violated Canadian law. Whether or not this is true, the Trudeau government has already been found guilty in the court of public opinion. Since the scandal broke, polling numbers for Trudeau and the Liberal Party have taken a dive.

When asked by reporters if the story was true, Trudeau delivered a carefully scripted response, saying that at no point did he “direct” Raybould to interfere in the case. Reporters then asked if he had pressured Raybould to interfere, to which he restated that he did not “direct” her to. Raybould herself refused to field questions in the immediate days after the story was released. Many took this silence as an admission of guilt.

This suspicion only intensified after the Liberals made repeated attempts to stifle any investigation into the scandal. The Liberal Party has effectively placed a gag order on Raybould, citing “solicitor-client privilege” which the government refuses to waive. The Conservatives and NDP have demanded a justice committee investigation, which the Liberals have belatedly accepted. However, with a majority on the committee, the Liberals have refused to demand testimony from the Prime Minister’s Office. An ethics investigation was also accepted, but the investigator is unable to press charges and can only levy fines up to $500. A public inquiry was rejected out of hand.

The political drama does not end there, however. On Feb. 12, Raybould resigned from the Liberal cabinet. On Feb. 18, Gerald Butts, Trudeau’s principal secretary, also resigned, saying “the fact is that this accusation exists” in a statement. On Feb. 19, Raybould was forced to wait two hours to address a cabinet meeting, with some reports stating that some MPs didn’t want her there. The following day, Raybould told the House of Commons that she hopes to have “the opportunity to speak my truth.” Other Liberal MPs have been asked not to speak to the media, for fear of further damaging the party. This is only the beginning of what is already the largest political scandal for the Trudeau government.

SNC and the Liberal Party

A close look at SNC-Lavalin can help us to make sense of the scandal.

SNC is a Montreal-based construction firm that employs around 50,000 people, and has revenues close to $10 billion. Apart from the Libya scandal, SNC has been charged or found guilty on numerous counts of fraud and corruption in recent years. This includes bribes to build a hospital in Montreal, shady dealings in Cambodia, and bribes to Bangladeshi officials, an act for which the World Bank barred SNC from bidding on its contracts for 10 years.

More important, however, are the bribes, both legal and illegal, that SNC has made to the Liberal Party over the years. In the last few decades, the Liberals have received tens if not hundreds of thousands of dollars from SNC, much more than the company gives to any other political party. In order to avoid the limit on corporate donations, SNC also devised a scheme to make donations illegally. In November 2018, an SNC executive pleaded guilty to making illegal donations totalling $117,803 to federal parties, more than $109,000 of which went to the Liberals. For all of those “donations,” SNC reasonably expected something in return.

Since at least 2017, SNC has lobbied the federal government to have Deferred Prosecution Agreements (DPAs) written into the Criminal Code. DPAs allow the government to make out-of-court settlements with corporations facing criminal charges. This would benefit SNC since, if it was convicted, the company would not be allowed to bid on federal contracts for 10 years. SNC’s lobbying campaign was championed by the Business Council of Canada, which represents most major corporations in Canada. In that time, SNC lobbied the Prime Minister’s Office 19 times. Their efforts paid off.

In spring 2018, the Trudeau government made changes to the Criminal Code allowing DPAs, just in time to intervene in SNC’s ongoing corruption case. The picture that emerges is none too favourable for the Liberal Party. Their only miscalculation was the insubordination of a renegade MP.

The system is guilty

Given the facts, it is hard to doubt the guilt of the Liberal Party. But what can be done about it?

The Conservatives have pounced on the SNC scandal to bolster their own credentials as an incorruptible party. They conveniently ignore the fact that, under Stephen Harper, their own party was plagued by scandal after scandal. This includes the Senate expenses debacle that they would rather people forget. They also ignore how their own party has received thousands of dollars from SNC over the years, despite its checkered history. The truth is, if the Conservatives were in power, they would no doubt act in the same way as the current government.

The acceptance of corruption by Canada’s political and business elite is nothing new.

In the 1970s, Jean Chrétien told Canadians not to put their “head in the sand” and ignore overseas business because they were bothered by bribes. In 1991, the former head of SNC told Maclean’s that whenever he issued bribes, he demanded receipts, saying, “I make sure we get a signed invoice. And payment is always in the form of a cheque, not cash, so we can claim it on our income tax!”

Similar views are widely held by the rest of Canada’s elite, if not in public then in private. This is no coincidence.

Under capitalism, profit is put before everything else. When certain laws stand in the way of making profits, as with SNC, those laws are modified by politicians at the behest of their corporate patrons. If those laws can’t be changed, firms will employ a number of schemes, usually aided by a team of lawyers, in order to skirt the laws and continue doing business. If they happen to run into trouble, firms can rely on their friends in politics to bail them out. After all, that is what they pay them for.

In truth, there is no way out under this hopelessly corrupt system. The actions of the Trudeau government prove yet again that, in the final analysis, the state is at the service of the capitalist mafia. These gangsters must be fought by other means.

Some have argued that SNC is “too big to fail,” and that if they are found guilty, it will have a devastating impact on the 50,000 people they employ. However, this is only true if SNC is left in the hands of its crooked private owners. In the capitalist courts, small-time criminals are routinely stripped of their assets after being found guilty. Why then should the big-time criminals be spared? Corrupt firms like SNC should be punished by having their assets confiscated and placed under democratic workers’ control. By these measures, no jobs will be lost, apart from the cushy executive positions at the top.

However, SNC’s owners are not the only ones on trial. For years, SNC was supported in its misconduct by the Liberal Party which, being found guilty in the eyes of ordinary people, deserves to be thrown out of office for the crime of aiding and abetting. In their place should be formed a workers’ government, purged of all crooked officials, corrupt dealings, and bureaucratic obstructions.

The court of public opinion has delivered its ruling, and the verdict is clear: the entire political and business establishment has been found guilty of mismanagement. The only justice is in throwing these crooks out of power, and handing control to the working class.