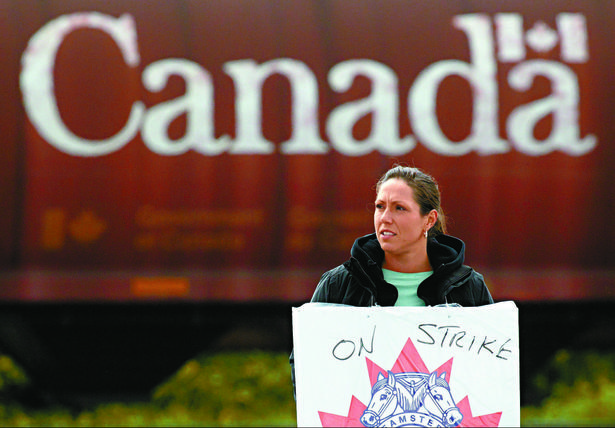 The fundamental rights of Canadian workers have yet again been unfairly targeted by the federal Conservative government. Since the Tories won a majority last May, they have now brought in back-to-work legislation five times. On Monday, the Tories introduced legislation to stop 4,800 conductors and locomotive engineers from the Canadian Pacific Railway (represented by the Teamsters Canada Rail Conference) from striking. This is a clear attack on the constitutional right of workers to exercise their power of collective bargaining.

The dispute between CP Rail and their workers is over a 40% pension cut, which CP says needs to be “in line with the industry”. These cuts will benefit a minority of shareholders in the company at the expense of workers who put in the actual work to keep the railways running. It is outrageous that pensions will be cut, only for the money to go into the pockets of shareholders. Workers are essentially paying for an economic crisis in the company in which they played absolutely no part in.

This form of bargaining is completely unfair, due to the fact that a company like CP Rail knows they can count on their allies in government to intervene on their side every time they are needed. This gives more incentive to demand harsher measures against workers’ rights. Every federally regulated employer in this country now sees bargaining as a thing of the past — they can just put forward their most outrageous demands and wait for the government to step in and give it to them. The rate at which back-to-work legislation has been used under the Conservatives clearly shows that they waste no time to protect the interests of big business in Canada at the expense of working-class Canadians and their families.

Conservative labour minister Lisa Raitt estimated the CP strike would cost the Canadian economy more than $540-million per week; however neither her nor the federal government offered specifics about how that amount was actually calculated. As with her interventions in the strikes and lockouts at Canada Post and Air Canada, Raitt has cited Canada’s fragile economy as the reason why the federal government needs to intervene. But, this rationale is ridiculous. CP Rail is not the only rail company in Canada; any lost revenue on the part of CP Rail would automatically go to CN or any of the other railways in operation.  Furthermore, just the previous week, federal finance minister Jim Flaherty was touting his government’s role in making the Canadian economy “the envy” of the G8.  We’re sorry, Ms. Raitt, but you cannot have it both ways. The real reason behind the back-to-work legislation is to send a message to workers — don’t bother fighting back against austerity and the drive for profits.

Railway workers, throughout history, have represented a powerful force against corporations and governments around the world. It is therefore no coincidence that after only 10 hours after CP Rail workers went on strike, the Conservatives stepped in with Bill C-39, urgently putting a stranglehold over the situation.

If the government did not intervene in the negotiations, it is clear that the workers could have have pressured CP Rail to give in to their demands, potentially sending out a message to the rest of the Canadian labour movement that austerity measures can be fought.

The Teamsters Canada Rail Conference (TCRC) has clearly stood by its workers throughout the process. 95% of CP Rail workers gave their union a mandate to strike — an extremely high number. TCRC president Rex Beatty says, “The battles these workers are waging is of utmost importance. CP is trying to drastically cut pensions, but we’re going to do our best not to let them do it.” Mr. Beatty explained that the railway’s demands were unacceptable due to the fact that workers are seeing their pensions cut, while managers, in contrast, are seeing their benefits increased.

The TCRC represents 125,000 members in Canada in all trades. The International Brotherhood of Teamsters, with which the TCRC is affiliated, has 1.4-million members in North America. This is the kind of power which terrifies the corporate sector and forces them to run to the government for help.

However, this is not to say that the TCRC leadership has not made mistakes.  For example, the TCRC reached an agreement with CP Rail to allow commuter trains in Vancouver, Toronto, and Montreal to continue running during a strike. Surely, the union leadership saw this as a good-faith gesture, but we ask, where is the good-faith from the CP bosses and the federal government who have now taken away the right to strike?

This is the real power that the working class has — they have the ability to shut down the economy if need be.  This is the sort of pressure that can force the bosses to cave.  We only need to look at the success of Air Canada workers who went on wildcat strike at Toronto’s Pearson Airport in March.

On their website the TCRC mentioned that the goal of letting commuter trains run was so that the government and CP could not “fabricate a crisis”. However it is evident, through Bill C-39, that the Conservative government did not need to fabricate a crisis in order to present back-to-work legislation — they just did it. With a majority government and the hand of corporate interest by their side, the Conservatives went ahead and presented the anti-democratic legislation for the fifth time in a year. The TCRC and any other labour union in this country must learn from this and avoid making concessions that prove crucial in the overall process of negotiations.  The labour leadership needs to understand the new epoch of austerity capitalism that we are now living in; to simply defend our existing wages, benefits, and rights, the struggle must move beyond the simple negotiation of a contract.  The struggle must also now be political.

By stopping commuter trains, the TCRC could have dramatically increased pressure on CP and the government. Most importantly they could have awakened Canadians about the bosses’ attacks on pensions and working conditions. The union could have also connected it to the similar attacks being waged against workers in the public sector, Air Canada, Rio Tinto Alcan, Caterpillar, US Steel, etc.  Government austerity is spreading across this country and affecting millions of workers all over Canada.

The need to spread the struggle across the working class

The dispute between CP Rail and its workers is much more than about a 40% pension cut. It is about the fundamental right of workers to fight for a better future for themselves and their children. In the last year alone, Air Canada workers have faced three back-to-work orders, along with another for Canada Post workers. It is worthy to note that the NDP used procedural tactics to delay the passage of the back-to-work legislation on Canada Post workers even though it was eventually forced into law by the majority Conservatives. It is time for workers to stand up behind a government that represents them and demand an end to this ongoing process by the Conservatives.

It is well intentioned that various labour unions come out to verbally support their brothers and sisters during strikes. However, solidarity needs to go beyond words.  Aside from mobilizing flying-picket squads and solidarity action, the labour movement must also appeal, and organize, the unorganized who form the majority of the working-class in Canada.  An attack on the labour movement affects us all.  The bosses and their representatives in government wish to turn back the clock and reverse all of the gains made by workers over the past 60 years.