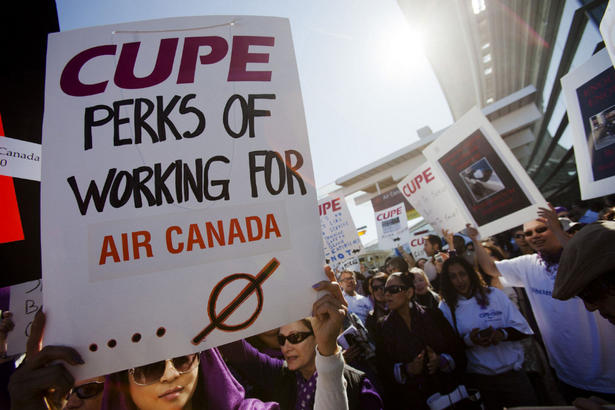 For the fourth time in less than a year, the Conservative government used back-to-work legislation to take away the right to strike by Canadian workers.  The Tories prohibited  8,600 mechanics, baggage handlers, and ground crew (represented by the International Association of Machinists and Aerospace Workers — IAMAW), as well as 3,000 pilots at Air Canada, from striking — a clear violation of the constitutional right of workers to exercise their power of collective bargaining.

The Conservatives used the March break, one of the busiest times of the year for the airline industry, as the excuse to rush in Bill C-33, which prevented a work stoppage at Air Canada.  Labour minister Lisa Raitt claimed that a work stoppage at Air Canada would have a serious impact on the recovering Canadian economy.  To prevent a strike from even occurring while her legislation was working itself through Parliament, Raitt filed a petition with the Canadian Industrial Relations Board (CIRB) to determine whether a strike would affect “the health and safety of Canadians”!  Bill C-33 outlaws strike action, regardless of the results from the CIRB, just clearly illustrating the hypocrisy of the Conservative government.

Raitt defended her bill as being neutral, stating that Bill C-33 targeted both Air Canada management’s decision to lock-out the pilots workers, as well as the ground crew’s decision to strike. This is a pathetic attempt to conceal the fact that Air Canada locked-out its pilots knowing that the federal government would step in with back-to-work legislation, just like it had done before with Canada Post workers, and with customer service and flight attendants at Air Canada. This legislation is an instrument to uphold Air Canada’s imposition of further concessions on its employees.

Bill C-33‘s call for an arbitrator is simply a smokescreen and will only force further concessions by the workers in terms of their working and living standards. This interest is openly demonstrated by the fact that the bill contains a section that forbids workers from even questioning the choice of the arbitrator. The union leaders involved have announced that they will legally challenge the legislation, but there is little they can do against a court system that is stacked by the government’s own agents.  If the labour movement is to seriously mobilize against these attacks, they cannot trust on anyone else except themselves.

A strike does cause inconvenience to the public, but it is one of the few means that workers have to defend their rights and fight for a better life.  The right to strike has been fought for generations by workers in order to get some power back from the bosses. Vacations are not more important than workers’ rights; indeed, in order to be able to afford a vacation, we need working-class families to be able to have decent salaries. It is this right that the Air Canada workers are trying to defend.

The use of back-to-work legislation is a blatant attack on the labour movement, and clearly reveals the links between the state and the bosses.  The assertion that a strike at Air Canada would hurt the weak recovery of the Canadian economy is false.  In fact, Raitt’s own officials concede that having Air Canada grounded because of a strike or lockout would not be so crippling for passengers thanks to a variety of other transportation options. “An Air Canada work stoppage would induce some passengers and firms to cancel their travel arrangements altogether, while others would opt for alternative airline companies or choose to travel by train,” according to an assessment prepared by the labour department. Clearly, the government sides with the capitalists over the workers.

This is the third time in nine months the Harper government has interfered in the private sector negotiations between Air Canada and its unions. In June, the Harper government threatened back-to-work legislation after a brief strike by its ticket agents. In October, flight attendants reached a deal with the airline under the threat of back-to-work legislation, before the workers had even exercised their right to strike.  In addition, the Tories had legislated the Canada Post workers back and imposed a contract that was worse than the one presented by Canada Post management. This is all part of an austerity agenda with the goal of making workers pay for the capitalist crisis, with the state intervening on the side of the ruling class.

Air Canada workers have done their best to resist the cuts and attacks imposed upon them by the company and by the government.  Dozens of pilots called in sick a few days following the legislation, causing significant delays and cancellations, especially in Montreal.  Air Canada baggage handlers and ground crew in Toronto and Montreal spontaneously walked-out following the suspension of several workers in an incident with Lisa Raitt.  In each union, there have nearly unanimous strike votes taken.  The pilots’ union has even rejected two tentative agreements with management, even recalling the executive on one occasion.

Unfortunately, the workers’ leadership is failing them against a tremendously rich company.  (Despite crying poor, Air Canada had no problem in paying former CEO Robert Milton $80-million over a five-year period; and, current CEO Calin Rovinescu stands to receive a $5-million retention bonus next month after just three years of service!)  It did not help matters that in the recent wildcat strike, the union leadership stood alongside Air Canada management, ordering workers to return to work.  Air Canada workers have clearly shown the lengths they are willing to go to to fight for better wages and working conditions.

The struggle at Air Canada is more than just about wages — it is about workers’ very right to organize and to strike.  These are fundamental democratic rights that are at stake, and this affects all workers, not just those at Air Canada.  The Canadian labour movement needs to be calling for the working class to form a united front in defence of workers’ rights, and against these austerity packages. We must defend this democratic right that was acquired by the struggles of the past generations and not trust that the government’s appointed arbitrators or judges will do the job for us.