Keep the Police Out of Pride! 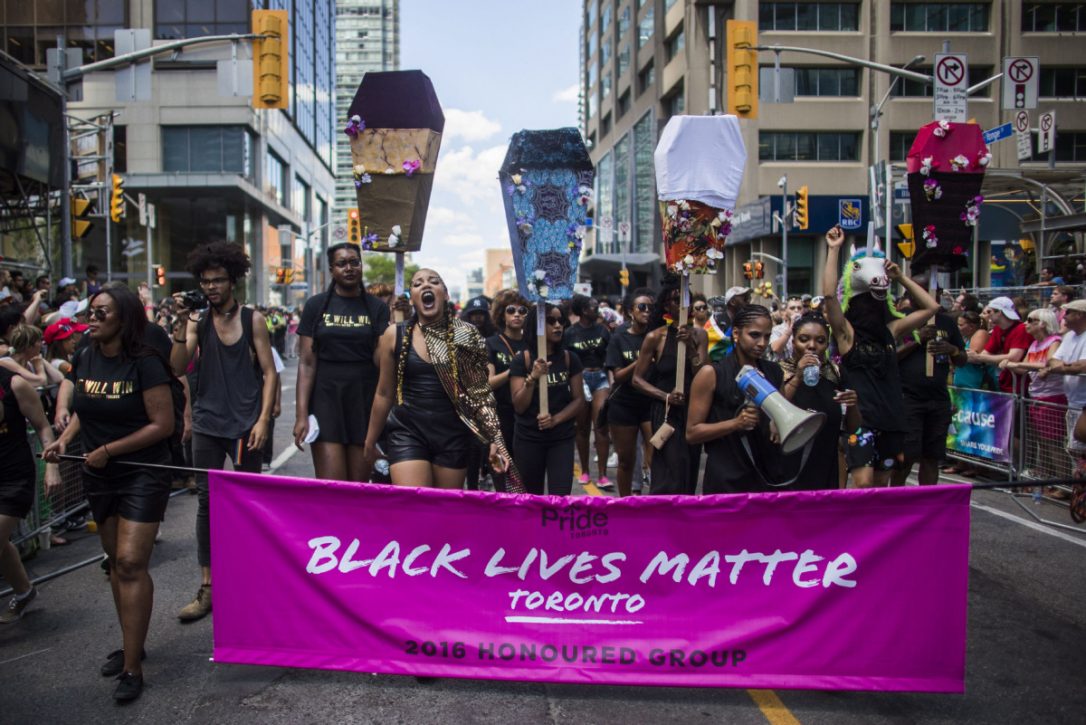 When Black Lives Matter halted the Toronto Pride Parade last year, they had a fairly short list of demands. These demands called for an end to Pride Toronto’s marginalization and exclusion of LGBTQ people of colour, prioritization of the hiring of members from particularly vulnerable sectors of the LGBTQ community (e.g. black trans women), the reinstatement of the South Asian stage, and the removal of police floats from all Pride marches and parades. Indigenous activists joined them by praying, smudging, drumming and chanting, and Latin allies participated in the drumming as well. They held up the parade until the now-ex director of Pride agreed to their demands, at which point the march continued as planned with only a 25-minute delay.

This action sparked immediate backlash. While many supported the action, both during and after, many others responded with outrage, from spectators to the opinion columnists of the bourgeois newspapers. Critics claimed that BLM had been disrespectful in stopping an LGBTQ Pride parade to talk about “separate issues” – ignoring that most of the members who participated in the action were LGBTQ themselves and the majority of their demands directly related to Pride’s treatment of LGBTQ people of colour. However, the main point of contention was the removal of police floats. Many, including City Councillor John Campbell, have argued that Pride will be going against its “core value of inclusivity” if it fails to include the police, ignoring that the police’s presence made a significant number of LGBTQ people of colour feel excluded to the point of avoiding the parade. It has also been claimed that the Toronto Police Service’s desire to march in the parade is a sign of how far relations between the community and the police have come and should therefore be celebrated – even though the police continue to harass and intimidate LGBTQ people in the Gay Village, especially LGBTQ people of colour, and only recently apologized for the 1981 bathhouse raids known as Operation SOAP.

The response from the police proved that their support of the LGBTQ community is only skin-deep. First, the chief of police attempted to frame their non-participation in the 2017 Pride Parade as a decision they had made in an attempt to be respectful to the community’s needs – a month after Pride Toronto’s membership voted by an overwhelming majority to uphold Black Lives Matter’s demands and therefore bar police floats! Then, rather than accepting the result of the vote and pledging to do better by racialized and LGBTQ Torontonians, the police union responded by urging City Council to cut Pride’s municipal funding altogether. This blatant attempt to twist Pride’s arm into allowing police floats again proves that the Toronto Police Service is only an “ally” to the LGBTQ community when it is beneficial to them.

Several city councillors, encouraged by the police union, put forward a motion to cut Pride’s funding unless they allowed the police back into the parade. The motion was eventually rejected by a margin of 27-17, but the fact that approximately a third of city councillors voted to defund Pride, on top of the fact that the debate on the subject lasted seven hours, demonstrates that the LGBTQ community cannot count on support from the state. Additionally, it must be observed that city council’s decision was likely at least partially informed by finances. Pride Toronto has been described by The Globe and Mail as an “economic powerhouse”; it has the largest economic impact of any Toronto festival, generating for the city millions of dollars each year, and cutting its funding could jeopardize that source of revenue. 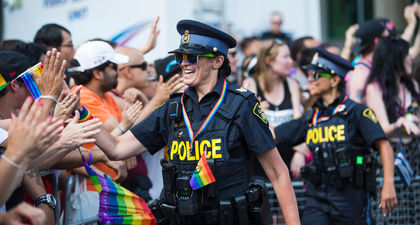 Let us be clear: these responses are undoubtedly motivated by anti-black racism and an attempt to keep radical politics (which were at the roots of the first pride parades) out of pride. The intervention of Black Lives Matter at Pride has sparked important conversations about racism, sex and gender based oppression, and the overlap of the two. The responses of the police and of the city have also served to highlight just how superficial state support of marginalized people, including LGBTQ people, really is.

The LGBTQ community has faced decades of state oppression, however some layers – especially those who have been able to enter the elite – cling to state recognition and approval. However, the participation in Pride of police in uniform, who have historically terrorized the LGTBQ community, and in particular its members of colour, as well as left-wing activists from, or who supported, the LGBTQ rights movement, creates a threatening atmosphere at Pride which goes against its original purpose. Let us remember that one of the first Pride gatherings in Toronto, in 1981, was primarily a protest against police brutality and state repression of the LGBTQ community.

The state only supports the LGBTQ community when it is more politically beneficial than scapegoating. All support for marginalized communities by the capitalist state is done from the standpoint of the interests of the ruling class, not for the genuine benefit of the majority of the oppressed who are from the working class. Capitalism needs scapegoats; a capitalist state needs outsiders to blame when something goes wrong, to direct the anger of the working class away from the real source of all the problems – the capitalist crisis.

A true end to homophobia, transphobia and racism is not possible under capitalism. Under capitalism, there will always be systemic inequality and oppression, and different layers of the working class will always be pitted against each other. The LGBTQ community should not cling to the hope that the state finally now has our best interests at heart, nor should we throw Black Lives Matter under the bus in an attempt to cling onto the state approval we do have. The LGBTQ community should instead reject the capitalist state and unite across lines of gender, race, sexuality, etc, to join the fight for the only real, long-term solution to these problems – the fight for socialism. The capitalists wish to divide and conquer us; we must instead unite not only with each other but the entire working class. None of us are free until we are all free.