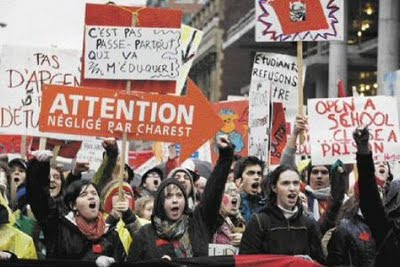 In a large part of the developed world the working class, through massive mobilization, was able to win access to free post secondary education in the post-war period. In North America, and particularly the United States, this social gain was never won and therefore, North America has one of the most inaccessible post-secondary education systems in the developed capitalist world. However, Quebec has been a bit of an exception within North America. During what is known as the “Quiet Revolution” in the 1960s, the CEGEP system was created by mass mobilizations of the labour unions. The CEGEP system is network of 48 colleges throughout Quebec that offer general education and technical training almost free of charge. The unions demanded education and training be made accessible to their children and they won this from the government and the system. This social gain is something that needs to be defended against all attacks from the capitalists who seek to profit from the education system.

You would think that this would be something that our governments would want to expand to further educate our population and provide basic job training to the work force. This is definitely not what Quebec Finance Minister Raymond Bachand had in mind when he released the pre-budget in October. This outlined a record provincial deficit of nearly five billion dollars and then went on to propose some “solutions” to eliminate this deficit by 2013-2014. Laid out on the table are increases in hydro rates, cuts across the board to social services, and the implementation of tuition fees at the cherished CEGEP system mentioned above. Why is the government proposing these ‘solutions’ that are in direct opposition to the interests of the majority of the population?

The economic recession has plunged governments, federal as well as provincial, into massive deficits. This is largely due to the fact that they have used billions of dollars in public funds to bail out the banks and major corporations whose profits were at stake by “over-exposure” to market risks, which they themselves created. Now, the bosses and their representatives in government want us, working class and young people, to pay for their crisis. This is also in store for Quebec.

The Quebec Liberals plan to eliminate the CEGEP system and to make it similar to the college system in the rest of North America where students must pay thousands of dollars every semester to study. This is a serious attack on working class students. Studies show that much fewer students from poor and working class families attended post-secondary institutions when tuition fees rocketed in the 1990s. With the introduction of tuition fees at CEGEPs, this will be true for Quebec, too. This will also be detrimental to Quebec students wishing to attend universities, as it is a requirement that they go through the CEGEP system first in order to pick up preliminary university courses to prepare them for their program.

The attacks on the CEGEP system will only be the first of many attacks on the Quebec education system as the government looks towards balancing the books. With the “recovery” from the crisis likely to be weak, we can be sure that they will not be asking the bosses to pay. The provincial government, be it PQ or Liberal, have continually attacked education in Quebec, even during a so-called boom! With the economic crisis putting governments into the red to bailout their corporate friends, they are now using these huge deficits as an excuse to cut social spending and attack health care and education. What is needed now is a bold united movement that will take on the government and declare that workers and students will not pay for the capitalist crisis!

The CEGEP system was a grand conquest for the movement in Quebec and needs to be defended against the attacks of the ruling class. The student movement in Quebec has historically been the strongest and most radical in North America. Ever since the 1960s, Quebec students have risen time and time again in strike action to advance their interests and defend the gains of the past.

The strong traditions of student unions, willing to do whatever it takes to defend their members’ interests, is something that is needed now more than ever. All the cuts of the past are mere drops in the bucket compared to what will be in the books for the future. All Quebec student unions need to unite around a program of “no concessions,” and to expand the demand for free education to all education programs, not just the CEGEPs. This demand strikes at the very heart of the system. All students, regardless of class, should have the right to quality post-secondary education. We need to fight against the capitalists who wish to make education inaccessible while increasing profits for themselves. The fight for education needs to be a fight for socialism.