Socialist Fightback Students (SFS) co-organized a rally at York University with the York Federation of Students (YFS), which is the student union representing the university’s 50,000 undergraduates. Given that it is exam season, it is impressive that over 100 students came out to fight for a full tuition refund, free education, and very importantly, to support striking university workers.

Socialist Fightback has been at the forefront of organizing undergraduate solidarity with CUPE 3903, which represents the striking graduate students and lecturers. This rally was an important show of force. 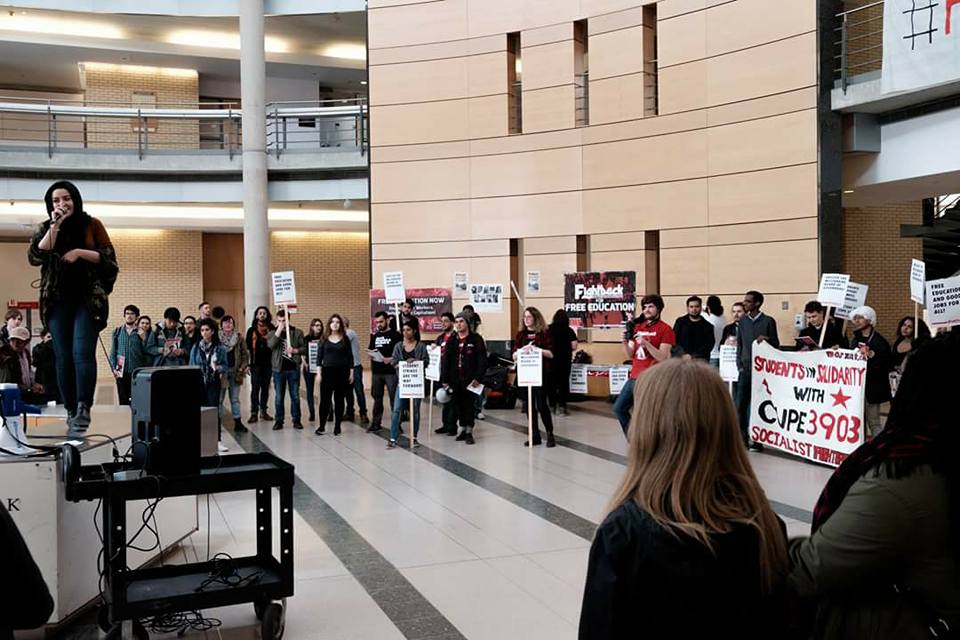 There were a number of speeches from representatives of different unions and organization such as the YFS, SFS, the Fight for 15 campaign, Student Against Israeli Apartheid (SAIA), ReclaimYU, the York University Graduate Students Association (YUGSA) and CUPE 3903. Sinthujha Kumarasamy of Socialist Fightback was the final speaker.

In her speech, Sinthujha pointed out that the York administration has refused to bargain with CUPE 3903 and has kept classes open to confuse students and to use us as a battering ram against the union. She explained that the administration wants students to think we have nothing to gain from this strike, but in reality this is an opportunity for students and teachers to carry out a united fight for good jobs and free education. She also pointed out that the incoming YFS slate ran on a platform of student strikes in 2019. She explained that now is a fantastic time for students to fight, and that student strikes are our best tool in the struggle. So why wait until 2019 to have a student strike? The strike vote deadline needs to be moved up.

With this rally we delivered a clear blow against a top administration at York University that is bent on breaking CUPE 3903 and playing a game of divide and conquer between students and striking university workers. We all have a stake in the fight for good jobs and free education for all, and this rally was a good first step in that fight. We are glad that the YFS called this rally, as we had been reaching out to the YFS leadership and also published an “Open Letter to the YFS”.

However, this rally was only a first step. There is enormous anger among undergraduates, but this rally was organized at the end of the exam period when most students are no longer on campus. We therefore handed a slightly updated paper-copy of our “Open Letter to the YFS” to Rawan Habib, who is the re-elected president of the YFS. The immediate demands we raise on the undergraduate student union are:

-Immediately organise a follow-up rally to support CUPE 3903, for a tuition refund and for free education.

-Immediately set a date and call for an emergency YFS Members Meetings so students can set a plan of action for undergraduates to enter the struggle.

-Immediately launch a campaign to reach out to and mobilize undergraduate students.

The YFS must organize an ongoing campaign to reach out to and mobilize undergraduate students. Socialist Fightback Students offered the student union leadership assistance in this task, and emphasized that we expected our student union executive to follow-through on their commitments.

For this campaign to be effective in winning its demands, it must continue and escalate. This means more rallies, and better outreach to ensure higher attendance. The vast majority of the YFS’s 50,000 members did not hear about the rally or only heard about it last-minute.

As we explained in our open letter and in Sinthujha’s speech at the rally, the YFS must immediately set a date and call an emergency YFS Members Meetings so students can decide on a plan of action for undergraduates to enter the struggle. A democratic membership meeting of the student union is needed so that students can express themselves, plan the course forward and get involved in the mobilization. Now is the time to be discussing undergraduate student strikes and making concrete, practical plans to make them a reality. The wonderful example set by striking graduate students and lecturers has already had the effect of popularizing the idea of striking to win demands.

If the YFS conducts this campaign properly, undergraduate students can win a full tuition refund and build the movement for free education, as well as strengthen CUPE 3903, leading to its victory over the York administration. Now is time for action, and Socialist Fightback at York University looks forward to assisting this campaign in every capacity.

Good Jobs and Free Education for all!

Student strikes are the way forward!

Abolish the millionaire Board of Governors!