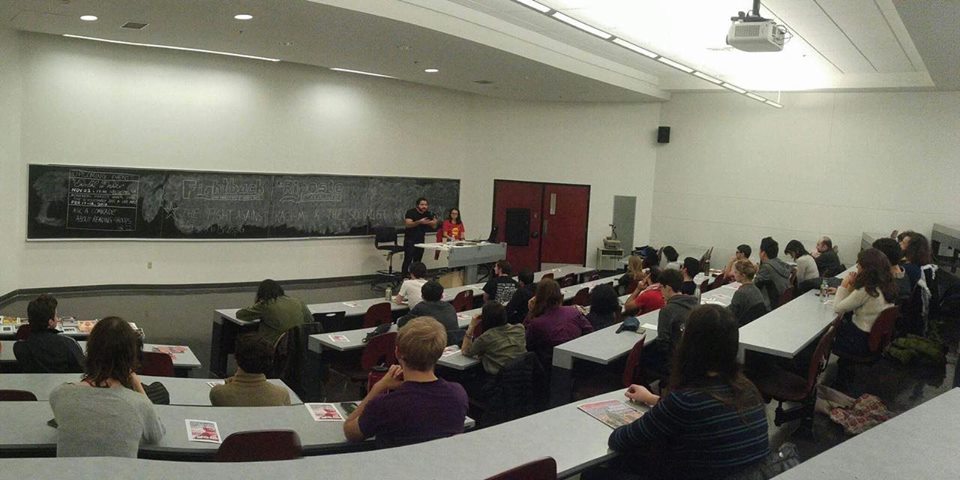 Following the big demonstration on Nov. 12 against racism in Montreal, Socialist Fightback Students organized two public events on the topic of “The struggle against racism and the socialist revolution.” The first event was held at the University of Quebec at Montreal (UQAM) on Tuesday, Nov. 14 and drew out around 35 people. A similar number of people attended the same event in English at Concordia University on Thursday, Nov. 16. The two conferences were facilitated by Farshad Azadian, member of the editorial board of Fightback and a longtime activist.

The presentation began with Farshad explaining that more and more youth and workers are radicalizing all over the world, rejecting the status quo and the political parties defending it. Farshad used the example of a poll of people between the ages of 18-34 in Europe asking the question, “Are you ready to join a large-scale uprising against the government?” Those who responded “yes” included more than 60 per cent of respondents in Greece, Italy, Spain and France. He went on to explain that it is in this context in which the ruling class uses racism to divide the workers and divert our attention from the real problem. Most notably, Farshad mentioned the refugee crisis in Europe which is being used to create a feeling of a state of siege, as if the refugees are coming to steal jobs and use “our” services. This has contributed to an increase in racism which is being cynically used by different parties to gain votes. The hypocrisy of the western bourgeoisie has been highlighted by their continual interventions in the Middle East which are responsible for creating the miserable situation that affects the region and has pushed millions of people to flee their home countries.

Farshad mentioned the fact that in Quebec, all of the main parties, the CAQ, the PQ and the PLQ, have fed Islamophobia and racism in one way or another in order to divert the attention away from the unpopular policies that they are advocating and implementing. The Liberals, who for years presented themselves as the friend of immigrants and minorities, have recently revealed their complete hypocrisy with Bill 62 and the abandonment of the consultation on systemic racism. It is this normalized racist discourse of the establishment parties that explains the fact that groups like La Meute and Storm Alliance have gained confidence and have become more and more visible. This shows that we can no confidence in the establishment parties in the fight against racism.

Farshad also touched upon the origins of racism by using the example of racism against black people in the United States. He explained that racist ideas did not fall from the sky, but actually flowed directly from the needs of the ruling class. In fact, forced labour in the U.S. was not uniquely performed by black people in the beginning. Over time, in order to stop the exploited from uniting and rising up, the racial component of slavery was reinforced by the ruling class. Racism became a very useful tool in order to divide the exploited, and it plays the same role in its various forms today.

In explaining that racism has been used by the ruling class to divide us, Farshad added that they also use immigrants and minorities as cheap labour, which exercises a downward pressure on the wages and working conditions of all workers. The struggle against racism is therefore intrinsically linked to the struggle against capitalist exploitation and the institutions which maintain it. This struggle can only be conducted using the methods of class struggle: mass mobilizations, civil disobedience, strikes, occupations etc. It is through the control of firing and hiring by the workers themselves that we can defeat racist bosses and managers. It is through civil disobedience that the workers can defeat Bill 62 in Quebec. It is through strike action and a general struggle to transform society that the workers and youth begin to see each other not as potential enemies, but as brothers and sisters in struggle. And it is only through overthrowing capitalism that we can create the conditions in which racist prejudice will eventually be known only through reading about it in history books.

The two presentations were followed by lively discussions touching on numerous aspects of the question. From the question of “freedom of speech” used by groups of the far right to be able to spread their racist discourse, to the role of imperialism in the destruction of the Middle East, to the racism visited upon Indigenous peoples in Canada, the discussion showed that the problem of racism is a vast one. Several interventions underlined that capitalism is completely incapable of addressing the different forms of racism prevalent in our society.

At both events, Farshad concluded by attacking the common argument leveled against Marxists that we are asking for the fight against racism to wait until after the socialist revolution. He explained that Marxists are on the front line in the struggle against racism and all struggles to improve the lives of the oppressed. But Marxists always try to link the struggle today with a more general analysis which explains where racism comes from and how we can root it out, once and for all. This is why we always fight against racism on a class basis, uniting workers in the fight for socialism. Farshad ended his talk by appealing to those in the room who want to get involved to raise their hands. At both events, the majority of the room, including many new people, indicated their desire to get organized with Socialist Fightback Students. If you were not able to attend these events but want to get involved, please do not hesitate to contact us!