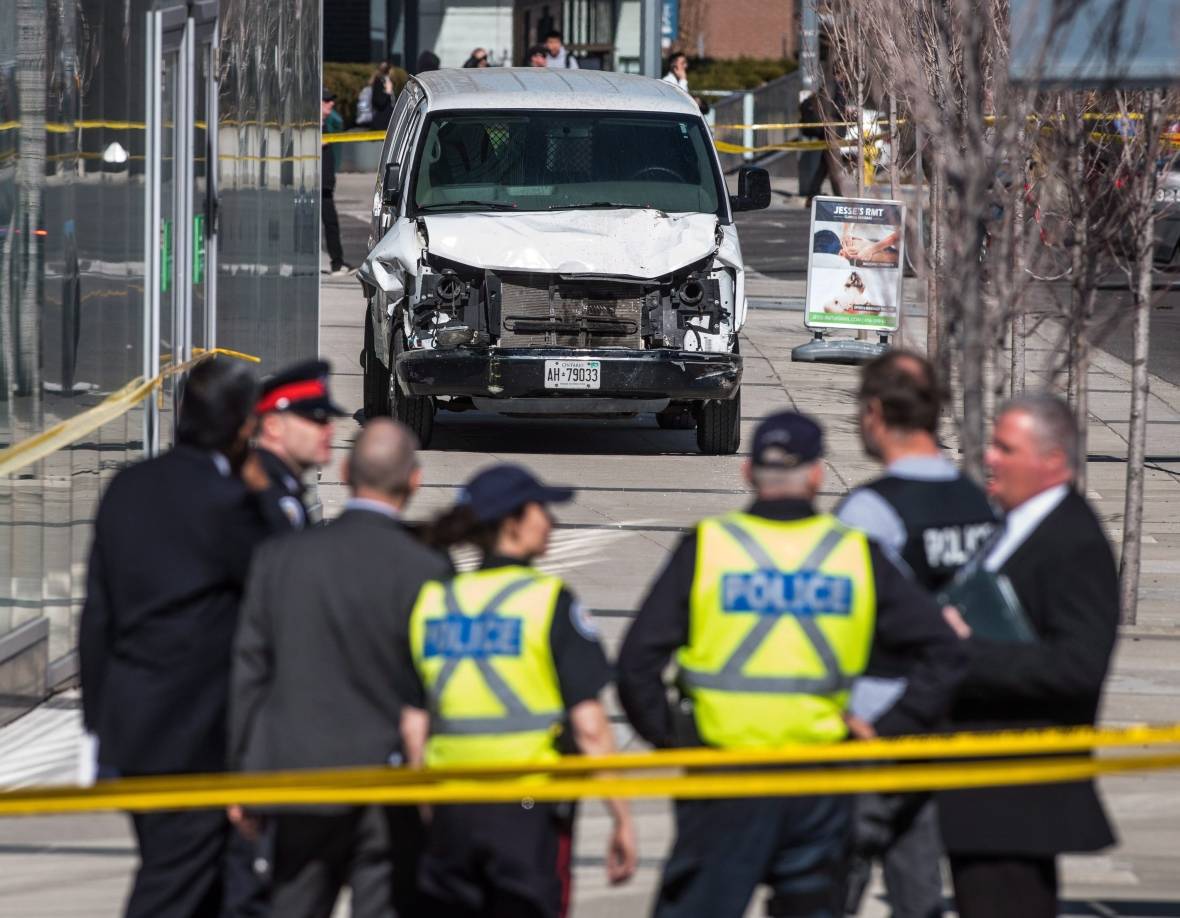 At 1:30 in the afternoon of Monday, April 23, a man deliberately drove a rental van into pedestrians in the Yonge and Finch area of Toronto. At the time of writing 10 people are dead, while 15 are in hospital, some in serious condition. The injured and dead are men, women, possibly children, out walking in what is known as Toronto’s “north downtown”, a busy retail area. How can we understand such violence and hate?

It was a sunny day, and many would have taken the opportunity to do some lunchtime errands after an inordinately long winter (just a week prior we had an ice storm). At the very same time as the attack, the author was taking a similar stroll in a different part of the city. That part of Yonge, which is the main north/south avenue through the centre of the city, houses a large immigrant population, particularly from the Persian, Korean, and Chinese communities.

Toronto is Canada’s largest city and regularly tops lists for livability and low crime rates. The Economist listed it as the fourth safest city in the world, and the first in North America. But many had speculated about when Toronto would join the club of London, Paris, New York, and other major cities that had suffered a mass killing. In 21st century capitalism, it appears that nowhere is truly safe.

The alleged killer has been identified as Alek Minassian, a 25-year-old student who was described by classmates as “socially awkward”. After the rampage he was cornered by a single policeman. Cellphone footage showed him pointing an object at the cop as if it was a gun. It appeared as though he was trying to get the officer to shoot him. But unlike recent incidents, such as the Sammy Yatim shooting, no shots were fired. The object he was holding was a cellphone. 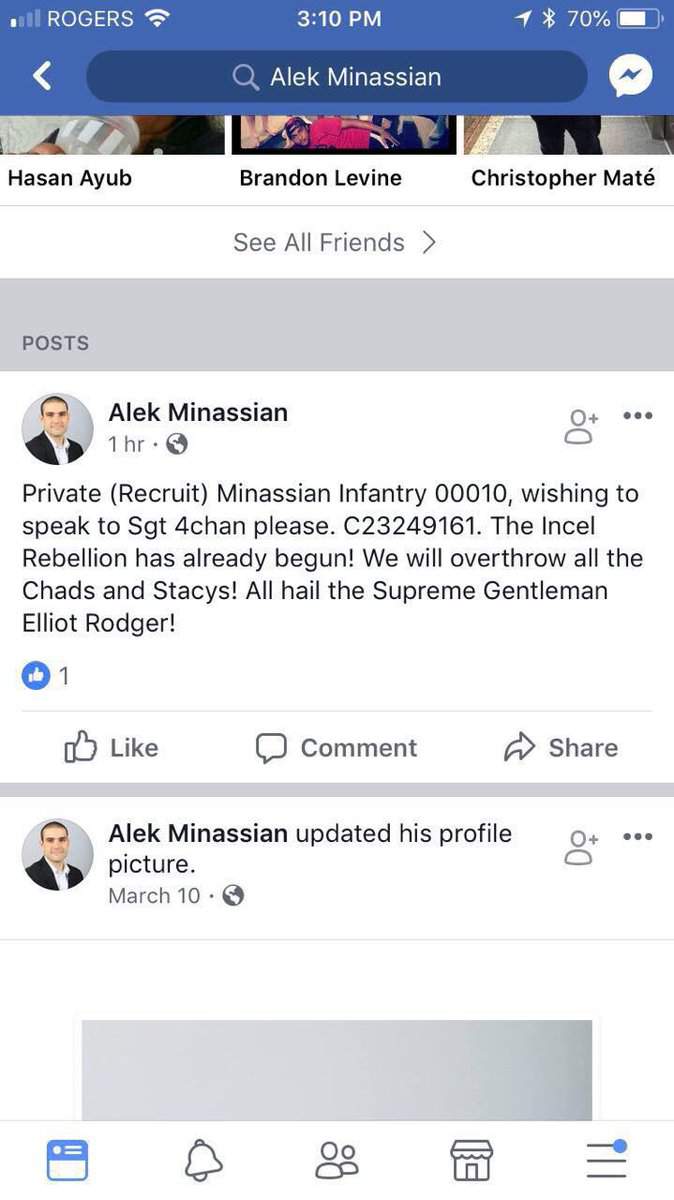 Thoughts immediately turn to the motive for the killings. The police and political leaders have been conspicuously tight-lipped. All that Public Safety Minister Ralph Goodale would say is that there appears to be “no national security connection to this particular incident”. This is in stark contrast to the 2014 Parliament Hill attack that was quickly attributed to “Islamic terror” by the Harper Conservatives, when subsequently it was discovered to likely have been the result of an individual having a psychotic break seeking to be killed by security forces.

Media have linked the alleged killer to a Facebook post calling for an “Incel Rebellion”. The post appeared at about the same time as the killings and has been verified by a Facebook spokesperson. It reads, “The Incel Rebellion has already begun. We will overthrow all the Chads and Stacys. All hail the Supreme Gentleman Elliot Rodger!”

Incel is shorthand for involuntarily celibate, an online community of largely young men who are angry that women will not sleep with them. This is linked with the men’s rights movement, which has taken a more and more misogynistic turn in recent years. These groups, through Reddit and other internet message boards, have become a conduit for alienated young men to join the alt-right.

Elliot Rodger is an apparent hero of the incels. He issued a 2014 manifesto against Chads (men who sleep with women) and Stacys (women who sleep with Chads) before going on a murder spree that killed seven and injured 14 in California.

The corporate media and right-wing politicians like to victimize Muslims, immigrants, and people of colour. Supposedly these people are a threat to so-called “Western values”. On the other side, those who attack immigrants, trans people, and women’s rights are defended by prominent figures such as Jordan Peterson and Rex Murphy. The alt-right should supposedly be left free to spout hate under the banner of “free speech”.

Free speech for hate-mongers has real material effects. Last January six Muslim men in Quebec City were gunned down in a rampage by a young man radicalized by anti-immigrant far-right message boards. Many parts of the media refuse to call such atrocities terrorism, and some have even targeted antifa activists as a bigger threat. This flies in the face of all reality. From 2001 to 2016, a total of 106 people in the USA have been killed by far-right extremists. The equivalent figure for the left is zero. These statistics do not include the murder of Heather Heyer, the anti-fascist activist who was killed during the “Unite the Right” rally in Charlottesville. Heather was also driven down by a vehicle, just like the Toronto dead and injured.

Capitalism in crisis is increasingly alienating for large sectors of the population. A recent survey of Canadians revealed that 56 per cent believed the next generation will be worse off, and only 13 per cent believed things would get better. But this is not just an economic question, it is also social. Capitalism has atomized people and has actively destroyed working class communities. Social experiences only exist when they can be commercialized for profit – and they often come with a large dose of nationalism and militarism. Dating has moved from a real-world social interaction to profit-driven Internet hookups. Isolated and alienated individuals, often lonely young men, find a community on the Internet amongst those who are similarly angry. Instead of blaming the capitalist system that destroys community, they blame immigrants or women who have rejected them. Manipulative hucksters like Jordan Peterson tell these boys that they are the master race who have been knocked off their rightful supremacy by “social justice warriors”. A small number leave the Internet for the community of a far-right organization, and the most damaged go on to conduct “lone-wolf” mass murders.

Mass killings are becoming a common feature in country after country. In the final analysis they are a symptom of the decay of capitalist civilization. However, it is important not to be despondent when encountering with such horrific events. In the face of such hate there is also much hope and love. Witness the outpouring of support by the people of Toronto—a city typically known for cold indifference. People opened up their homes for those stranded by the subway closures and did whatever they could to help. These selfless acts show that genuine human nature in the face of tragedy is communal solidarity and not capitalist self-interest. And for every sad individual who turns to misogynistic and xenophobic scapegoating, hundreds and thousands of young people look to rebuild working class community by adopting the ideas of socialism.

Trotsky said, “Life is not an easy matter… You cannot live through it without falling into frustration and cynicism unless you have before you a great idea which raises you above personal misery, above weakness, above all kinds of perfidy and baseness.” It is necessary to build a mass revolutionary movement that can give young people the hope for a new society and prevent them falling into despondency and despair. We are building such a movement that can fight all the evils of capitalism, anti-immigrant racism, sexism, homophobia, etc, and unite all the oppressed in the fight for a socialist society that can end all this alienation. We have no time to waste.