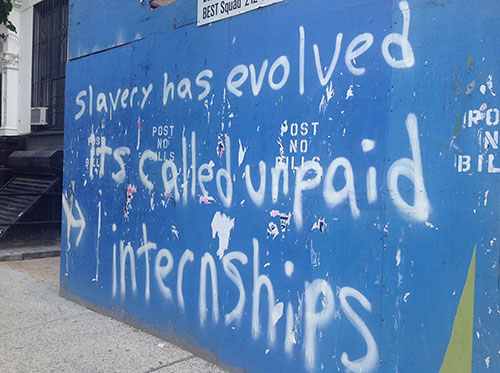 As a generation of young students and workers look to enter an uncertain labour market, many are promised that internships are the answer to securing employment after graduation. Thousands of young people are pushed into accepting unpaid internships, convinced that this is the only way to gain the valuable work experience they need to advance in their field. However, the reality is that many of them are forced into long hours of doing menial tasks of little value to their education. In some cases this amounts to unpaid internships being used by employers to gain free labour with the promise of future careers that fail to materialize.

Ontario Undergraduate Student Alliance president Amir Eftekarpour has suggested that there are between 100,000 and 300,00 unpaid interns across Canada. These unpaid interns are often asked to work hours that far exceed what is required for their school credit and to the detriment of their health, ability to maintain other paid employment, and their education.

Although the abuse of unpaid internships is not a new issue, a spate of recent incidents has brought the injustice faced by young workers to the fore. In Vancouver, the Fairmont Hotel placed an ad looking for an unpaid intern to bus tables.  In Edmonton, a college student was killed in a car accident after interning for 16-hours in one day at two local radio stations. These incidents simply highlight the serious problem that most internships are not regulated in most provinces and have no connection to any educational institutions. The most extreme cases involve internships that are totally unrelated to any academic programs and exist as unpaid entry-level positions. The Canadian Intern Association’s website has a Wall of Shame that lists the worst unpaid internship ads it has found; it includes companies as varied as Reader’s Digest, Bell Media, Roots, and Wind Mobile. The job descriptions in these advertisements are often indistinguishable from descriptions you would normally see for professional paid employment and often show blatant disregard for existing labour codes.

The Toronto Star has highlighted cases of hospitality student interns being relegated to work changing sheets, scrubbing carpets, and cleaning toilets. Some were expected to complete the same workload as other paid employees.

While journalists in the mainstream media seem all too eager to point out that many of these unpaid interns receive valuable work experience and have positive results, we need to consider that these students are already burdened with heavy student debt loads and second paid jobs. Furthermore, companies often use unpaid interns as an excuse to lay off existing staff and to undermine their wages. What is the need to have paid workers on the books when you can hire someone to do the same job for no pay?

Working-class students who support themselves have a much harder time taking these unpaid positions with the pressures of rent, tuition, and looming student loan payments. Long unpaid internships outside of post-secondary programs are only accessible to those with the means to delay their income or those willing to take a huge chance with their future.

Paid internships could save many youth the burden of taking on other part-time work to pay their expenses while in post-secondary programs. At the same time this would ensure that paid jobs are not being replaced by free labour in the form of these so called “internships”.  Surely these large and profitable corporations can afford to pay these interns a fair wage while still providing them with valuable skills and work experience. Without these interns corporations would have no choice to but to hire paid workers to get the job done.

A proposed private member’s bill by NDP MP Andrew Cash looks to address the gaps in federal and provincial laws that leave unpaid workers completely unprotected. In Ontario, the Occupational Health and Safety Act does not cover workers who do not earn a paycheque. This means that unpaid interns are not subject to even the most basic labour laws in the province, including overtime or a limit to the numbers of hours worked. The Ontario government even admits that because unpaid interns fall outside of the jurisdiction of the Labour ministry, they have no idea how many unpaid interns are being abused across the province. Eliminating illegal unpaid internships that do not meet provincial requirements and ensuring they are academically relevant is a start but the elimination of unpaid work altogether is a better solution.

No matter how hard the corporate media tries to justify an internship as an important career stepping stone the reality is it is driving wages down below the legal minimum to nothing but a mere promise of “experience”. It is not an exaggeration to state that unpaid internships are a modern form of slavery, where our work is not even compensated. This comes as the global crisis of capitalism forces companies to exploit the labour force even further to try to maintain previous profits. College and university students are being expected to pay for not only their education but their on-the-job training while looking forward to increased living costs and stagnant wages.

We demand the following:

1) All internships must be linked with a recognized course of study.

2) Interns must receive union rates of pay, conditions, and rights.

3) All internships must provide an explicit pathway to a full-time job.

Capitalism cannot provide the solutions to these problems. We need an end to a corporate education culture in our post-secondary institutions. Canadians deserve the right to free post-secondary education and living grants to ensure they complete their studies free of debt. We need the right to a good job instead of an obligation to work for free. Only socialism provides the solution to these issues so students can be free from the pressures of economic uncertainty and debt. Only when students and youth are free from the shackles of capitalism can they devote their energy to solving real problems and building a better society for humanity.