The struggle for a Catalan Republic enters a new stage

The proclamation of the Republic by the Catalan Parliament on October 27th was short-lived. The Spanish state was ready to crush it decisively, while the Catalan government had no plans and no strategy to defend it. That, however, is not the end of the movement.

The emergence of the Committees for the Defence of the Republic (CDRs), which entered the stage forcefully during the November 8th general strike against the jailing of eight Catalan government members, shows the way forward.

Prominent members of the Catalan government and the two parties which are part of it (the bourgeois nationalist PDeCAT and the petty bourgeois nationalist ERC) have now openly admitted that they were not ready for the defence of the proclamation of the Republic in the face of brutal Spanish repression. In all likelihood they never thought the movement would go that far. At best, their strategy was hopeless: the illusion that Spanish brutality in the face of peaceful action would provoke the intervention of the “international community” (read the EU) to broker negotiations with Spain. The EU, as could have been predicted, sided fully with Spain and the defence of Spanish legality (including the suppression of Catalan institutions through article 155)

On the other hand, the Spanish state was ready and prepared to use any means at their disposal to put an end to what they regarded as a challenge to the whole of the 1978 regime. They used article 155 of the Constitution to sack the Catalan government and disband the Catalan parliament, forcing early elections. Then they used the National Court (a relic of the Franco era) to jail eight members of the Catalan government, pending trial for rebellion and sedition, as well as issuing arrest warrants against the Catalan president and four other government members who are currently in Belgium 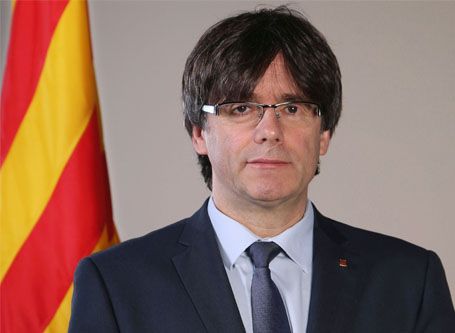 It has now also been revealed that they had a special operations team ready to storm the Catalan parliament in a three-pronged operation (by land, air and through the sewers) to arrest the Catalan president if he had barricaded himself in. The general secretary of ERC has now explained that the Spanish government sent a message to the Catalan government that they were ready to use the army if they defied article 155.

The arrest of the Catalan government members was answered by massive demonstrations on the day it happened and the following day. On November 8th, a general strike was called by a number of smaller unions which was accompanied by massive picket lines organised by the Committees for the Defence of the Republic, blockading the main roads and train stations, as well as mass demonstrations in towns and cities across Catalonia. On November 11th, a million-strong demonstration in Barcelona demanded the release of the political prisoners.

The Committees for the Defence of the Republic emerged out of the Committees for the Defence of the Referendum that organised the opening and defence of polling stations during the October vote. There are now over 280 of them, in towns, cities and neighbourhoods across Catalonia and they have developed a structure of national coordination. They played the leading role in organising the mass pickets, blockading over 50 main highways and key train stations during the November 8th general strike.

This shows the way forward for the struggle: mass organisation from below, independent from the vacillating bourgeois and petty bourgeois parties in the Catalan government which have already shown their inability to lead the movement.

Attention is now being centered on the December 21st Catalan elections. Three parties represent the “article 155 bloc,” those parties which pushed for the coup against Catalan institutions: the Spanish ruling Popular Party, the right-wing Spanish nationalist Ciudadanos and the “social democratic” PSC (the Catalan branch of PSOE). Despite having a new leader, Pedro Sanchez, who was elected pretending to represent a left shift in the organisation, PSOE has shown itself to be a loyal party of the 1978 regime, supporting Rajoy’s attack on Catalonia all the way. These parties will try to mobilise and capitalise on the pro-Spanish vote in Catalonia. Scandalously the PSC has included members of the right-wing bourgeois Catalan nationalist Unió in prominent places in its lists.

Catalan president Puigdemont, still in Belgium, will stand, but not in the name of his discredited PDeCAT party, but rather at the head of a “broad list”, Junts per Catalunya (United for Catalonia) consisting mainly of members of his own party. He will try to capitalise on the sympathy vote but is expected to do badly. His party has abandoned all talk of independence and of a Catalan Republic. In an interview with Le Soir, Puigdemont even admitted that a “solution other than independence” would be acceptable. The bulk of the votes of the Catalan government coalition Junts pel Sí (PDeCAT + ERC) will go to junior partners ERC, revealing a shift to the left within the pro-independence ruling bloc. ERC will stand on its own, also adding a few independent personalities in its list, and is expected to become the main party.

The anti-capitalist pro-independence CUP will stand with its own “rupturist, pro-independence, left-wing” list, as was agreed at a special national assembly of the organisation, attended by over 1200 members.

There will be a strong mobilisation of the pro-independence camp as a response to Spanish state repression. It is clear that even a layer of those who favour a federal solution for Spain will now, after the brutal repression of the referendum, vote for pro-independence parties.

Standing nominally against independence and against article 155 will be Catalunya en Comú (Catalonia in Common) a coalition around Barcelona mayor Ada Colau, the Catalan branch of Podemos plus ICV and EUiA which loosely corresponds to the United Left in Catalonia. The general secretary of Podemos in Catalonia, Albano Dante-Fachin, had been at loggerheads with the national leadership and was then removed in a bureaucratic manner. The problem with the parties behind Catalunya en Comú is that they have tended to equate the behaviour of the Spanish state with that of the Catalan government. In reality, the Catalan government (however inconsistently and for whatever cynical reasons) did attempt to exercise the right of self-determination, while the Spanish state used brutal repression to prevent it. The two things are not the same.

It is quite likely that these elections will produce a result similar to that of the September 27th, 2015 Catalan election. Those elections were already seen as a plebiscite on independence which resulted in a high turnout on the day, over 77% which was 10 points higher than the previous election. At that time, the pro-independence parties got 47.5% of the vote which gave them an overall majority of seats in Parliament and clearly more votes than the total of the parties openly opposed to independence which received 39% of the vote.

In the Spanish nationalist block, Ciudadanos hopes to come first and is already courting the PP and PSC to form a three-way “constitutional coalition” after the elections, but it is unlikely that they would get enough seats. The Spanish state is worried about the possibility of a repeat of a pro-independence majority and has already indicated that article 155 intervention will continue until and unless a government committed to respecting the Spanish Constitution of 1978 is formed. That Constitution, of course, flatly denies the right of self-determination. Prominent voices within the Catalan PP and also in Ciudadanos have called for the illegalisation of pro-independence parties or programmes.

As we have explained in previous articles, faced with the reactionary and undemocratic nature of the 1978 regime, the exercise of the right of self-determination in Spain becomes a revolutionary task. The bourgeois and petty bourgeois parties in the Catalan government have shown themselves not to be ready to use revolutionary methods and are inherently unable to do so. The only possible way to advance the struggle for a Catalan Republic, which could be the beginning of the unravelling of the whole of the regime across Spain, would be by using revolutionary methods of mass mobilisation and self-organisation. The CDRs represent an important step in that direction.

In breaking with the bourgeois and petty bourgeois leadership, the Catalan Republican movement also needs to adopt a clear anti-austerity and anti-capitalist character. That is the only way to win over sections of the Spanish speaking Catalan working class which have been so far reluctant to join in. That would also help arouse the sympathy and solidarity of workers and youth in Spain, which is necessary in order to defeat the Spanish state.

For a Catalan Socialist Republic as a spark to the Iberian revolution!