IMT Quebec Statement on the Barbaric Shooting in Quebec City 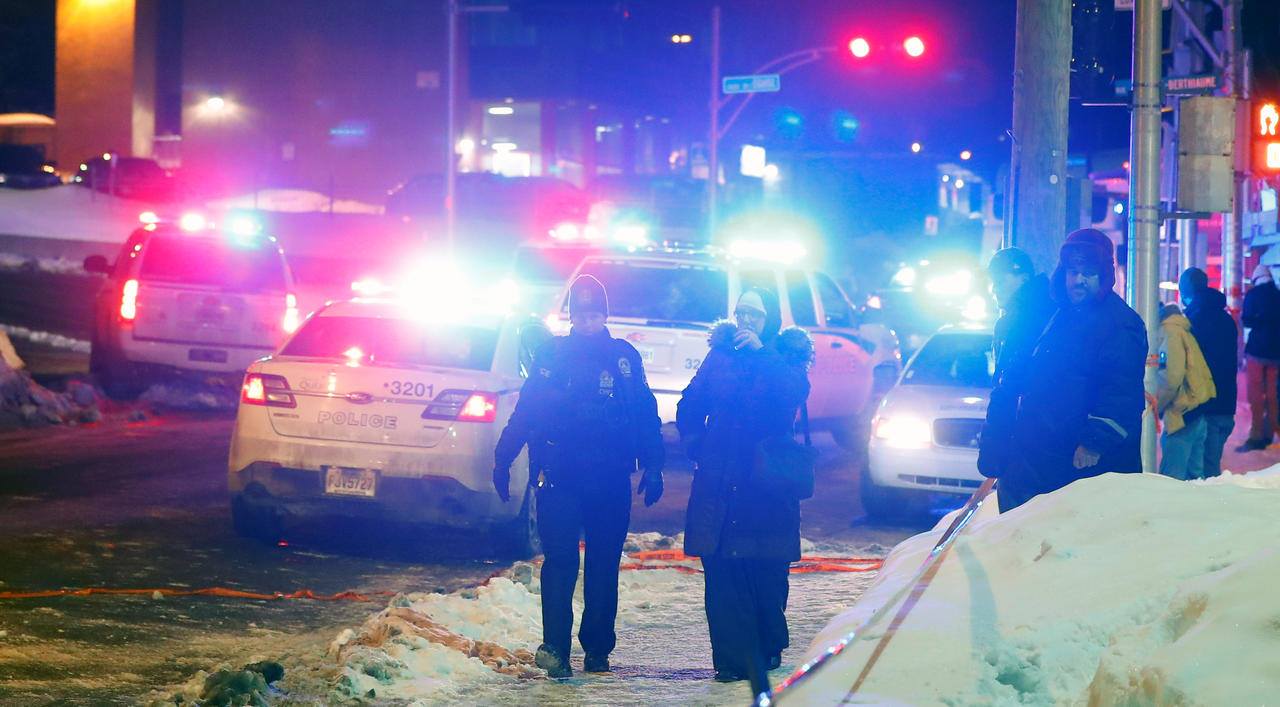 The Islamic Cultural Centre of Quebec was the victim of a brutal atrocity, a bit before 8pm Sunday evening, where one man opened fire, killing six people and wounding a further eight. The thirty-nine other people who were gathered for a night prayer were unharmed. Fightback strongly condemns this cowardly attack on the Muslim community and we offer our condolences and our solidarity to the victims and their families.

The intensified atmosphere of Islamophobia that has been whipped up by mainstream politicians in Quebec and with the rise of Donald Trump in the USA has had the effect of inspiring racist vermin to take up arms. Alexandre Bissonnette, the alleged shooter was “known by several activists in Quebec City for his identity based, pro-Le Pen and anti-feminist positions at the University of Laval and on social networks.” The responsibility for this bloodshed rests not only on the shoulders of the shooter himself but equally on those politicians and commentators who have been stirring up hatred and Islamophobia.

This event has occurred in the general context of the rise of racism, xenophobia and islamophobia which has particularly been fueled by the recent election victory of Donald Trump as President of the United States. This has raised the confidence of racist scum who have begun to stick their heads out and appear in broad daylight. Just in the last week following the election of Trump, more than 700 racist, Islamophobic, homophobic, anti-Semitic, misogynist or transphobic hate crimes were reported.

In Canada, three hate crimes made headlines during this same period following Trump’s victory. As well, the CBC reported a rise in extreme right-wing racist propaganda on campuses all over the country.

This Islamophobic hatred has not spared Quebec. This isn’t the first time that this mosque was targeted by a hateful act. Last June, during Ramadan, a pig’s head was left on the doorstep which had a card with the writing “bon appétit” on it. A few weeks later, Islamophobic flyers attacking the Islamic Cultural Centre were distributed in Quebec City.

Establishment politicians who have been stirring the pot with xenophobic statements and policies are to blame for the normalization of this hatred. Since yesterday, they have been crying crocodile tears and pretending to extend solidarity towards the Muslim community. 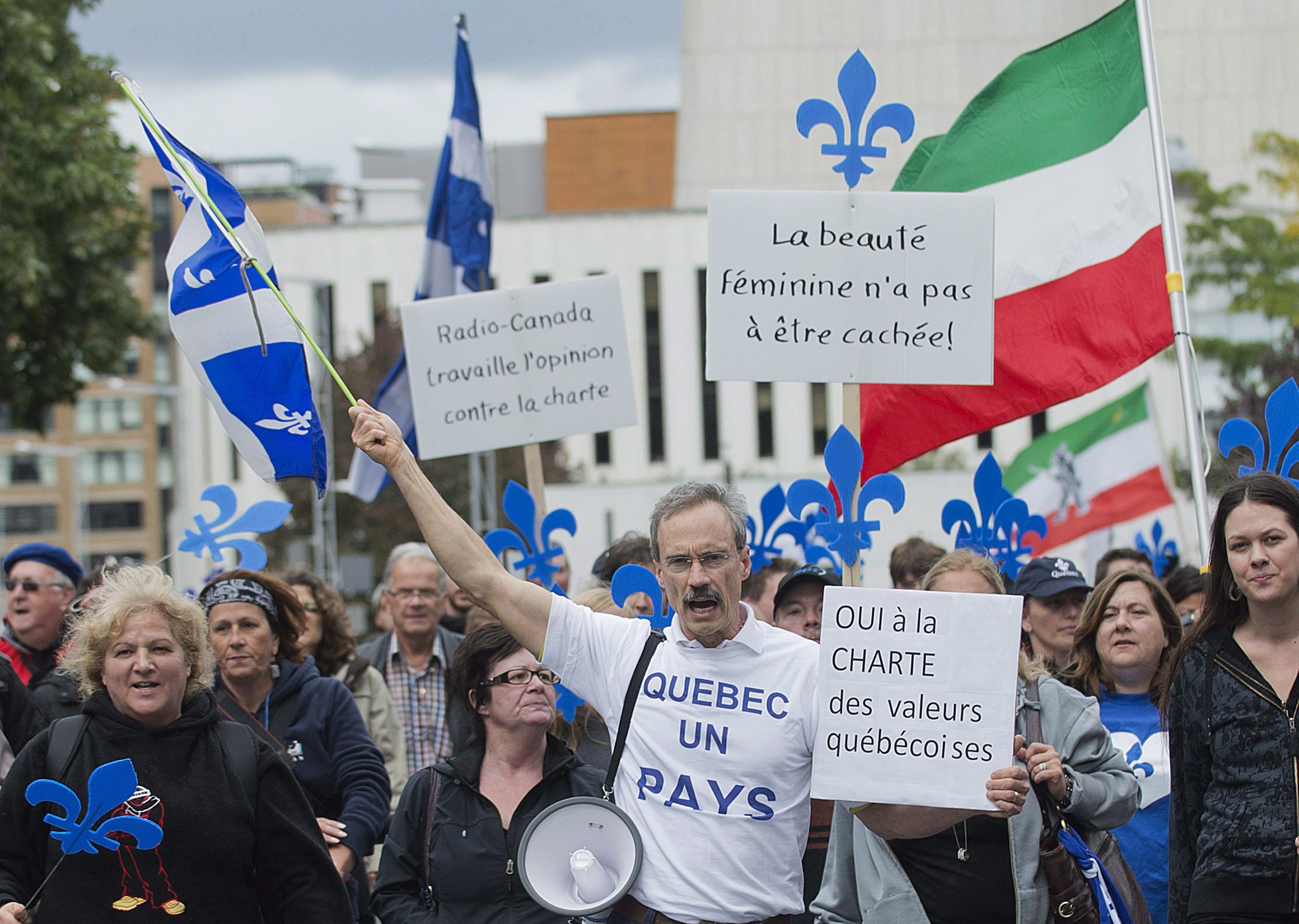 However, these same politicians didn’t seem to mind speaking ill of Muslims and stirring up hatred over the past years. Jean-François Lisée, during the PQ leadership race tried to make us believe that the Burkini debate was a burning issue and tried to associate his opponent with an imam. Last November, François Legault of the CAQ used the threat of the chador in an attack ad against the PQ and the PLQ. And the mayor of Quebec City, Régis Labeaume, stated last night to Muslims that “I want to say that we are friends,” while last March he stated that Mosques were hotbeds of radicalization.

Last night’s shooting shows again that the xenophobic policies defended by Lisée, Legault, and others such as Bock-Côté are far from being inoffensive as these politicians suggest. The ideas promoted by the Charter of Quebec Values, the debate on the burkini, the banning of religious signs, etc… are far from benign despite the thin veneer of respectability that the corporate media provides them. They are only the politically correct version of the horrors regularly promoted on the openly racist radio stations in Quebec City. Already, the danger posed by these ideas were seen following the public debates surrounding the Charter of Quebec Values. The atmosphere of Islamophobic hatred was palpable on the streets of Quebec City and the statistics show a marked increase in hate crimes that year.

The extreme-right feels as though it is gaining in strength and support when its ideas are also defended in a subtle way by parties like the PQ and the CAQ. In Quebec City, a demonstration against “Islam” was held on October 15th organized by Pegida Quebec, the Avengers of the People, the Soldiers of Odin and La Meute. It is therefore time to denounce these politics for what they really are: racism with a different packaging. And as it is raising its ugly head, we need to organize to fight against it.

It is not an accident that the increase in racist Islamophobia corresponds with the deepening of the crisis of the capitalist system. In this context, the ruling class has an interest in ensuring the workers, who are looking for someone to blame for the crisis, look to their brothers and sisters of foreign origin or of a different religion rather than uniting in a common struggle against the 1% that exploits and oppresses them. It is not the Muslims who are responsible for the destruction of our healthcare system, for the decay of our public schools, for the stagnation of our salaries, for governmental corruption, for the rise in the cost of hydroelectricity etc… Don’t let hate and racism divide us! 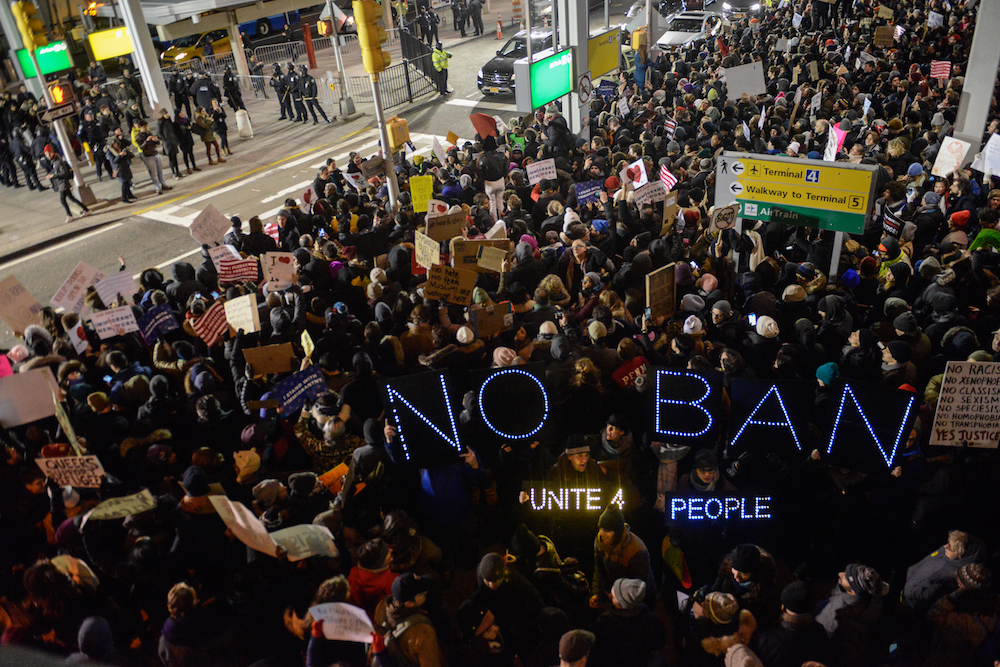 Over the past week we have seen an inspiring mass backlash against the racist policies of Donald Trump. A wave of protests were sparked by Trump’s signing of a decree last Friday prohibiting the citizens of seven Middle Eastern countries from entering the United States. This was a measure explicitly targeting Muslims. Spontaneous demonstrations immediately erupted, most notably at JFK airport where taxi drivers chose to go on strike to protest against the immigration decree. The demonstrations continued for the weekend all over the United States.

Faced with this racist decree coming directly from the White House, people from all oppressed layers of society, in alliance with working class people are showing us the way forward. Only mass action can stop the rampant racism, not only in the United States and Canada, but all over the world. Racism and Islamophobia raised their head yesterday evening. This tragedy was caused by capitalist politicians who have been fanning the flames of racism. Until capitalism is defeated through mass struggle, terrible tragedies like the events last night will continue to be a frightening reality. What we need is to uproot this rotten system and get rid of it. The struggle against oppression in all of its forms can only achieve victory by becoming a struggle for a new system, a struggle for socialism.

Islamophobic capitalist politicians are responsible for this bloodshed!

For mass struggle against racism, xenophobia and islamophobia!